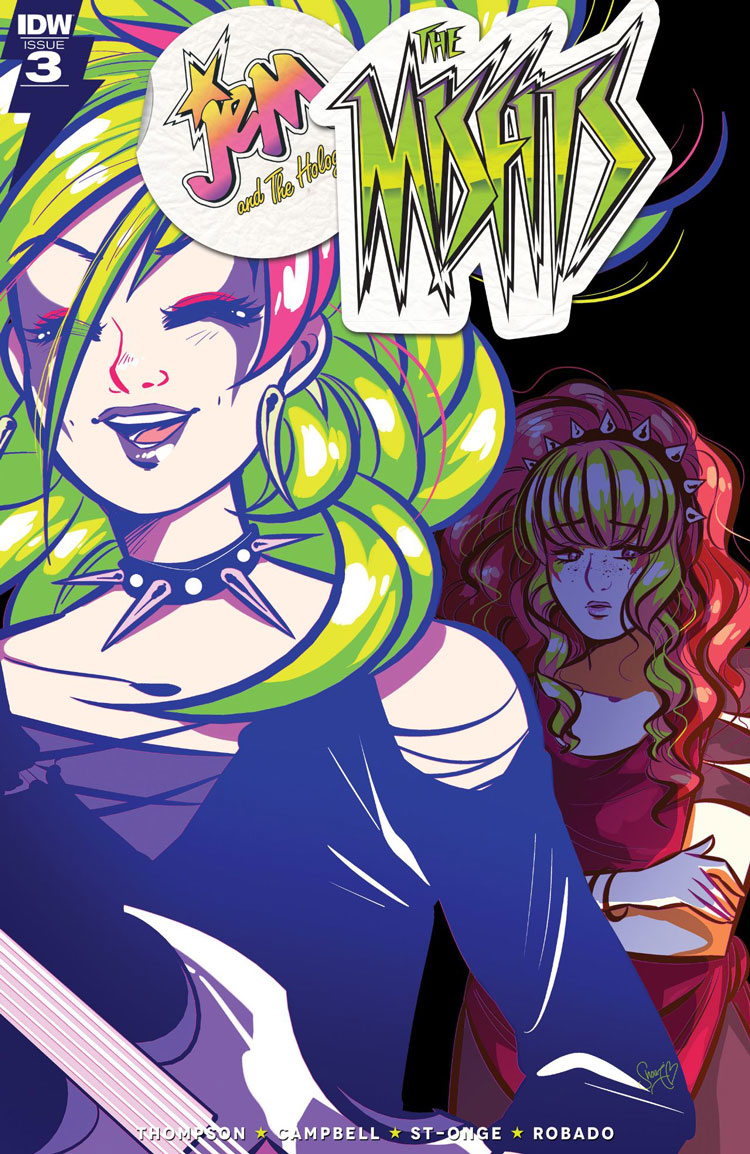 The spotlight spins onto Blaze now, as the once-lead singer of the Misfits, now back-up singer, has a secret — one that could potentially ruin her career. And how Pizzazz reacts will forever change the path of Blaze’s trajectory with the Misfits.

In what’s yet another chapter in a mini-series that rivals the quality and thoughtfulness of the book from which it spun out, The Misfits #3 takes on the most precocious task of looking back on Blaze’s origins — and does a magnificent job in the process.

For a character who has become such an important part of the overall tapestry of the Jem and the Holograms universe, Blaze lives a fairly interior life among her bandmates. But what we hadn’t gotten until now is that feeling doesn’t come from inadequacy, or even overflow from isolation felt as a trans woman outside the band. It’s squarely about dreams, and Blaze not knowing how they may play out given the direction the Misfits have taken in recent months.

There’s been no doubt in previous storylines that Blaze is a fountain of energy, and Thompson and Campbell continue to capture that, both in the present day and in flashback form. It’s especially cool to see that her enthusiasm and sheer delight in music hasn’t waned in Blaze’s adulthood, but that what we get is a genuine adult decision to be made — stick with the sure thing or shimmy out onto that branch with no safety net alone.

It’s once again to the credit of the writers’ astonishingly sharp rendering of Pizzazz that we see what a false choice this dilemma represents. I don’t want to take too much time in a review of a Blaze-focused issue praising Pizzazz, but c’mon. If anyone took a massive leap from animation cell to paper, it’s Phyllis Gabor. And that nuance continues here with wit, humor, and charm, not to mention genuine affection.

So, Blaze’s victory feels monumental here in terms of growth for the character, both in terms of her courage to decide on what she wants and Pizzazz’s understanding that the world isn’t simply black and white, us vs. them.

And it also represents a significant victory, I think, for Blaze that her history didn’t tread in an area that would have left many with cringed teeth — that of her previous life pre-transition, whatever that may have entailed. It’s smart and telling that we see only the woman who would become Blaze, because to feature anyone else, beyond just being an insult akin to deadnaming, just wouldn’t be about the same person.

This is perhaps St-Onge’s strongest issue since joining the Holograms family, giving us a balance of “action” (as I’ve come to think of the singing/recording scenes) and interpersonal drama. Blaze among all the Misfits stands out as the most effusive and willing to express the wide range of emotion — and St-Onge takes full advantage, even letting us into her head in the subtlest ways through a cracked smile while performing behind Pizzazz. It’s no easy thing to imply satisfaction or contentedness in the moment, but the artist manages it effortlessly.

Of course, Blaze’s physical presence is as divergent as all the other cast members, and maintains a unique lankiness with freckles and a round, short nose that never fails to make me smile. St-Onge and Rodabo assemble the unique package which is Blaze, and it remains instantly identifiable and balanced between aspiring super-star (those hair streaks kill me) and just regular girl from the neighborhood.

Once again, Thompson, Campbell, St-Onge, and Robado deliver a magnificent look into these characters we’ve all come to know and love in Jem: The Misfits #3. I know there’s a hiatus coming, and it haunts me even now, with two issues left to go. Praise the powers that be that realize the Misfits need to continue on as a solo act, separate from and in addition to Jem and the Holograms. I just can’t go back now.