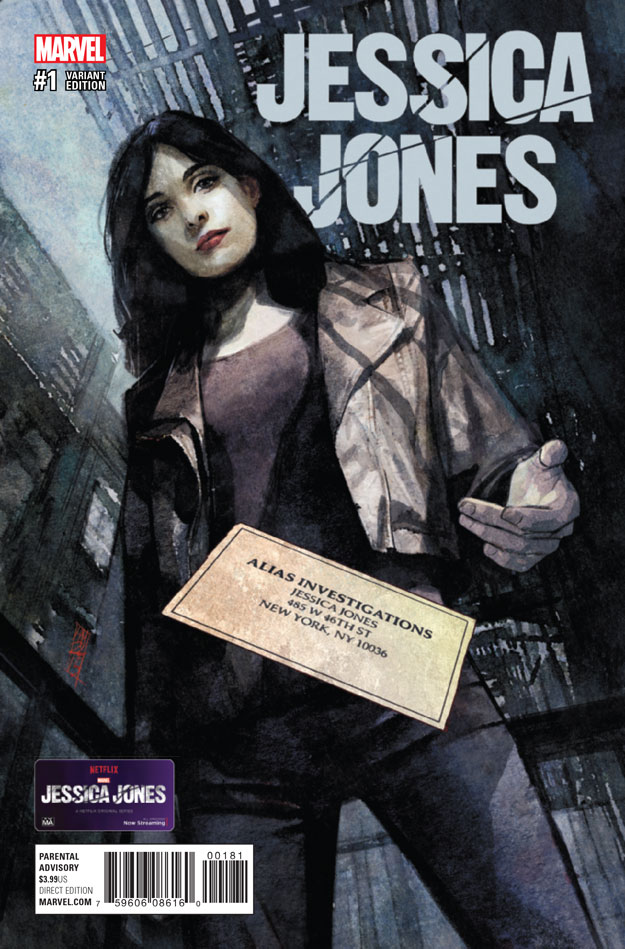 “Didn’t know you were that strong.”

And with that, Jessica Jones is BACK.

For an entire generation of comic book readers, Alias was the quintessential — one of the very few, if we want to be truthful — truly adult comics Marvel produced. Not adult in the sense of boom-chicka-wa-wa (although, now that you mention it), but in the sense of darker tone, rougher language, and at its heart, a willingness to show its female protagonist as deeply flawed in a fairly unfunny way.

Today, Marvel’s shelves are filled with female protagonists of all shapes, sizes, characteristics, and abilities, but none of them are darkly imperfect in the way Jessica Jones was back in her original series, before New Avengers, before Power Man and Iron Fist. And her return in this brand new issue #1, with both original writer and artist on board, is a gift to the line as a whole.

Bendis launches the series, starring the fairly talented, if not compulsively down on her luck, private investigator as he should — with a mystery. Multiple mysteries, in fact. A mystery incarceration, a missing child, a mother being hunted by super-heroes left and right, and a man who remembers life before the incursion of Secret Wars. It’s a lot to take in across the swath of 20 pages — and it makes me giddy to see it all unfold in the coming months.

Jessica’s voice comes right back under Bendis’ pen, with her previous bout of domesticity and back seat watching swirling down the drain like Hudson River run-off. It’s alarming in one sense — and probably moreso for those who favor the matrimonial relationship between Luke Cage and Jones — but in another, it’s so invigorating to see the character I know and loved returned to a complexity we’ve only been able to garner on the television screen for the better part of a decade.

And having Gaydos back, with colorist Hollingsworth in tow, is a gift so rich I can barely contain my excitement. Jessica Jones IS Michael Gaydos’s vision, this perfect blend of slacker aesthetic with strength, grit, awkwardness, and disregard for convention. Her hair feels like a bit of rat’s nest. Her smirk almost as famous as her cussing.

And let me tell you. When Misty Knight punches you, and you catch it dead in midair and move her out the door one-handed, you know who you are. You’re Jessica Goddamnit Jones and you’d better get the fuck out of her way.

As a whole, Jessica Jones #1 is a return to form for one of Marvel’s most unique characters, someone I fell in love with so long ago and honestly wasn’t sure I’d ever get back the way I remembered her. Now, with an extra layer of mystery added to her return to form, Bendis and Gaydos are doing the impossible — making me love Jessica more than I ever did before.

Fuck off, Jessica Drew. Take a hike, Misty Knight. Step off, Carol Danvers. Like it or not, Alias Investigations is open for business once again.