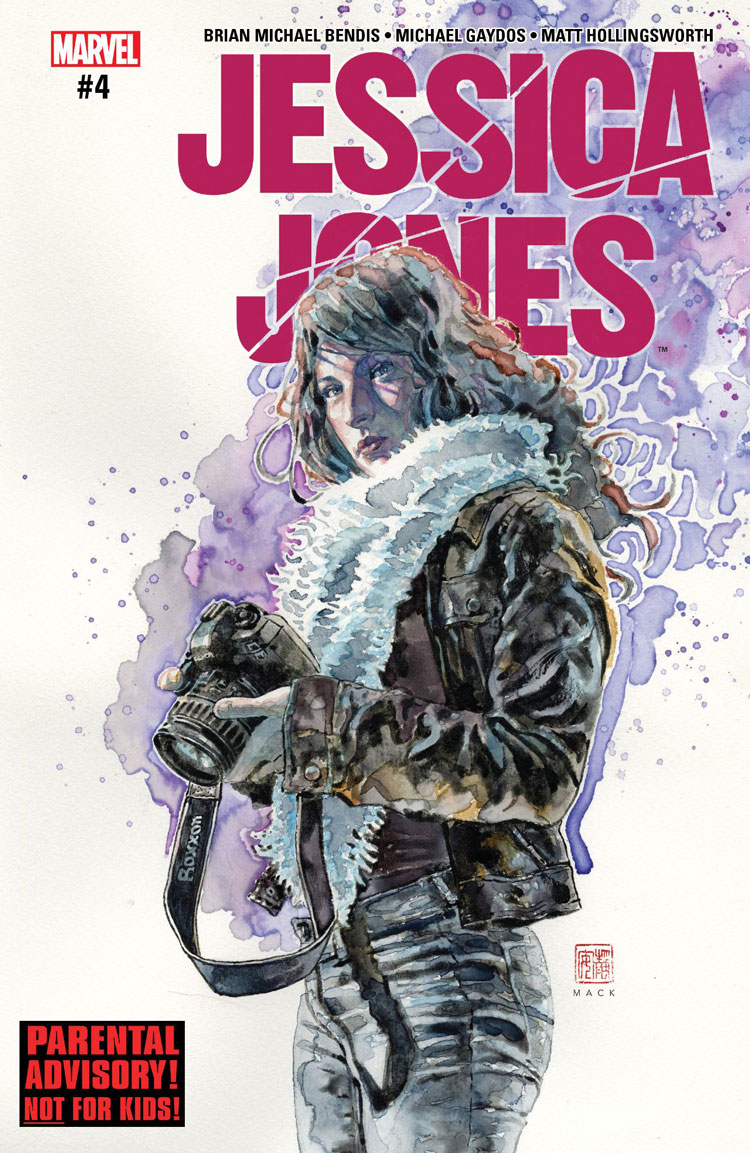 Mystery follows Jessica after her time in jail, especially after an impromptu meeting with the ominous woman Allison. While many things are still up in the air, a big reveal is made in this issue of Jessica Jones!

Bendis is a well-regarded writer, and like his other works, his writing excels here. Bendis does well with relationships, bringing chemistry that some writers neglect. The rapport between Misty and Luke, the conversation between Jessica and one of her good friends, even the talk Jessica has with Detective Costello—there’s just this great back and forth that immediately provides an understanding of who these two are and how they are between one another.

Gaydos’ work is magnificent. Each panel feels like the poster to a noir. It’s a comic of thick lines, grubby people, and classy streets. His backgrounds especially are mesmerizing. Gaydos’ art is even more outstanding when coupled with the coloring abilities of Hollingworth, who almost stole the show for me. I’m not sure if the panels would be so captivating without the beautiful choices Hollingworth makes when it comes to colors.

There’s a particular two-page splash panel where Misty and Luke are talking on a street. Apartment complexes line up each side of them until infinity, only to be blocked by swarms of almost-leafless trees. Each apartment complex has character, looks like it’s been there for a while. There are a variety of cars and vans lined up throughout the entire block. There’s this atmosphere of people living there, even if only Luke and Misty are outside.

Couple that with rich splashes of purples, creamy oranges, and lush pinks, the scene feels like the smoggy sundown of a large city. It’s stunning to look at. The interactions on the page between Misty and Luke, while important and great, almost feel secondary when staring at the splash in full.

This is the fourth issue of a comic centering around a mystery, so if you haven’t read the first three issues of this, you probably should read that first. The mystery is intriguing. What you learn in this issue, while not the most gripping reveal, is definitely a reveal. I’m intrigued to see how all of this will end up.

If you like Jessica Jones, whether it be in her television show or in her other appearances in comics, you’d probably love this.