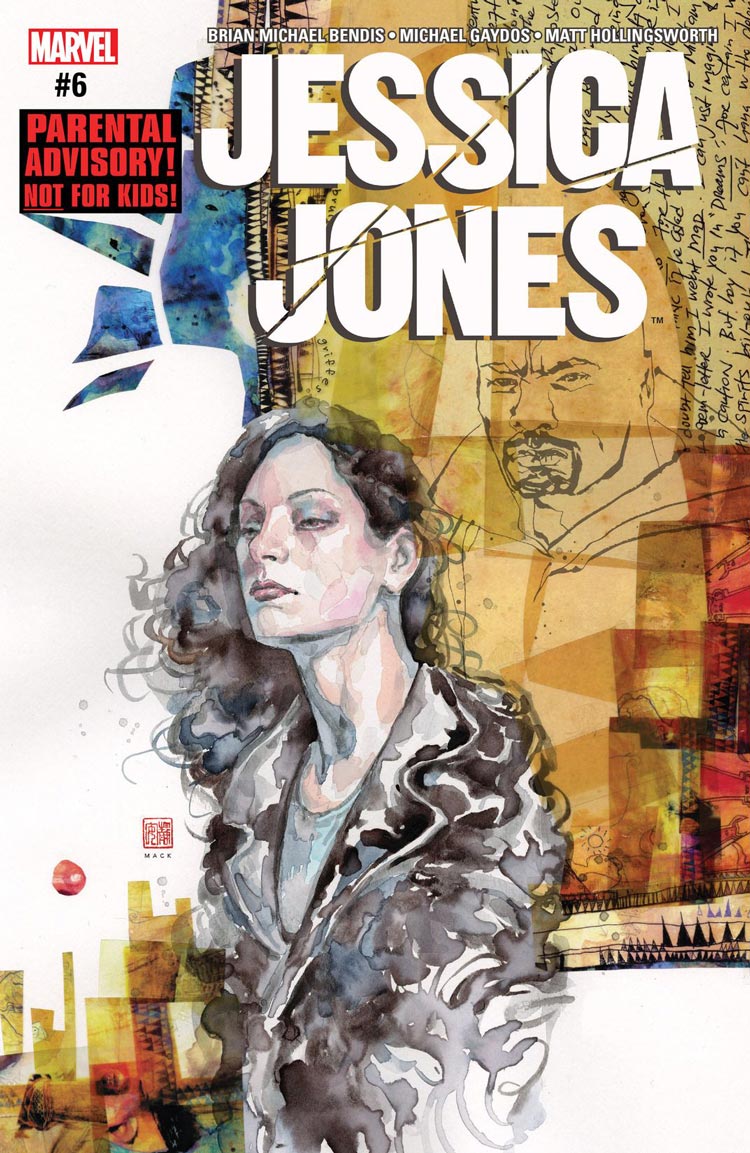 As the first arc of Jessica Jones’ first volume wraps, the only question left unanswered is why the book exists at all.

Stop me if this scenario sounds familiar: Jessica Jones’ latest client has turned up dead, she’s had an argument with Carol Danvers, she’s in possession of potentially damaging information involving major superheroes, and the door to her office is broken.

This is of course our heroine’s current predicament as she decides whether or not to get Carol killed because a quasi-cannibalistic murderer told her that the major superheroes conspired to let billions of people across dozens of universes die to save their own. It’s also the same predicament she faced two issues into her original run, when the stakes were a VHS tape with Steve Rogers changing into Captain America on a rooftop.

The most basic problem with the current volume of Jessica Jones is that it’s taking a very long time to go absolutely nowhere. In six issues, we’ve discovered that Jessica and Carol went to extraordinary lengths that mostly involved destroying Jessica’s personal life to solve a problem that Carol more or less caused herself.

The notion that Carol radicalized a woman by accusing her of a crime she didn’t commit and seems to have tortured her in an attempt to coerce a confession is too easy to swallow to matter following Civil War 2, and the idea that Jessica would be doing anything less than adding another layer to a very transparent long con on the say so of an anonymous murderer is impossible to swallow, so we’re left with an obvious conclusion to a story with no meaningful impact.

Ostensibly the plot line of Jessica discovering that Secret Wars happened and that Tony Stark, among others, covered it up is going to be the major focus of the series going forward, especially since we get a quick flashback to the revelation as Jessica watches Carol and Sharon Carter from a distance, reminded of her outsider status.

It’s a baffling choice to make because what Bendis is effectively doing here is plagiarizing Grant Morrison’s Animal Man without the emotional stakes available to give it resonance. When Morrison told this story, it was Psycho Pirate who remembered the world before Crisis on Infinite Earths and there was, both within the fictional world, and the readership in the real world, a palpable sense of a generational shift if not an outright loss. Deaths that would stand for years, like those of Barry Allen and Supergirl were still being felt. Stories like Whatever Happened to the Man of Tomorrow closed off the era in a way that gave it a distinct identity.

Secret Wars was an addled mess whose only meaningful impact was a slight consolidation that brought Miles Morales into mainline continuity. It’s a narrative dead end.

Realistically speaking, foiling Alison Greene’s plot to kill the Champions shouldn’t have taken any more than two issues to accomplish when the only outcome seems to be that Jessica is doubting the superheroes who never truly let her in and that her marriage is over. There’s a surreal irony to seeing America Chavez break up with her girlfriend in a whiplash sequence of four panels in the debut issue of her series and the impending dissolution of Jessica and Luke’s elapse over six issues in which they only spoke directly once.

Extreme decompression of the unravelling of a relationship can work to tremendous effect in comics, Sunstone dedicated an entire graphic novel length volume to it and then followed it up with another volume teasing out the resolution of the rift for a grand total of over two hundred pages of story dedicated to one single festering misunderstanding.

It worked for Sunstone because Stjepan Sejic dedicated those pages to both visually and textually teasing out the underlying causes of the misunderstanding. In Jessica Jones, it doesn’t work because the bulk of space on the page is dedicated to characters talking at each other in ways that don’t advance the story meaningfully.

The other major problem is that Michael Gaydos’ art can’t seem to squeeze a single ounce of drama or kinetic motion out of the story. At the outset of the issue Carol is meant to be attacked and depowered by a device Greene bought, but it looks like the bad play acting that we later discover it truly is. She looks at her hand, takes off her glove, says “Huh,” and “Oh,” then kind of slumps over.

It’s further compounded by the difficulty that Gaydos has in selling a punch. We see a closed fist drawn right up against Carol’s head, but there’s no legible point of impact. There’s no sense of motion, no contortion as Carol takes the hit, no movement of her hair, just a fist seemingly resting right in front of her face.

Jessica Jones is supposedly a passion project for Bendis and Gaydos, but after six issues the experience is best summed up as driving across a city in rush hour traffic to get a coffee from Starbucks when there was one at the end of the block.