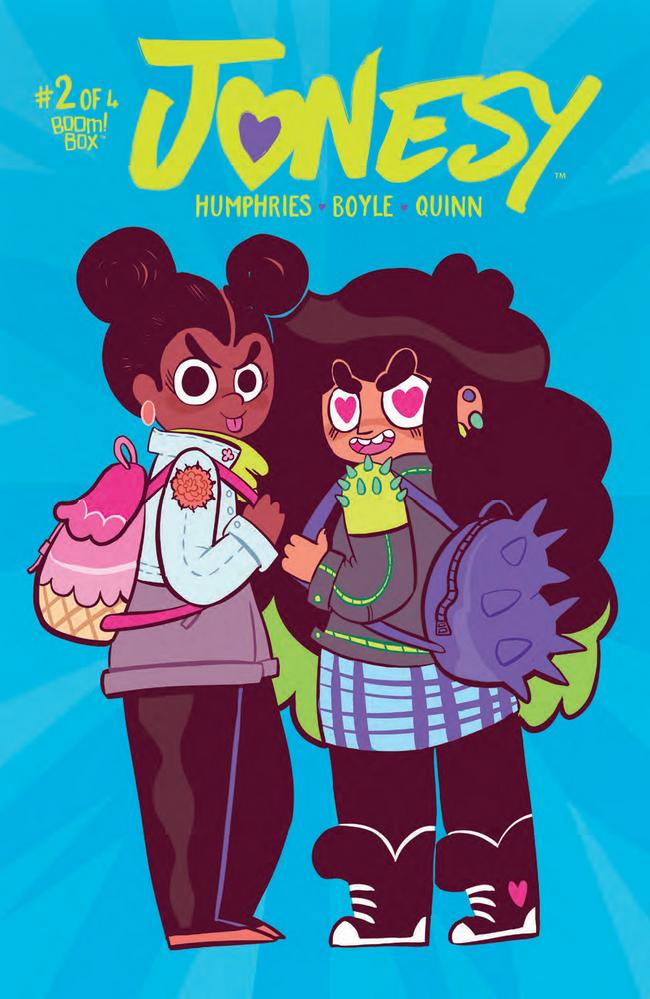 Jonesy is NOT thrilled at having to be at her father’s donut stand, which is keeping her away from her musical crush Stuff. In true Jonesy fashion, she uses her powers to sway the line of customers to a nearby stand, giving her time to catch Stuff’s new video as Susan strolls along. She and Susan trot of by themselves in pursuit of carnival fare as a string of misadventures comes across our protagonist’s lap. By the end of the story, someone is onto her while another promises mischief in the coming issues.

Jonesy is fun as hell. Really. It’s a great, quirky story about a young Latina who loves pop music, does not really love her peers, and who, at the end of the day, has a warm heart. I like Jonesy as a character who could be guarded and cold, but who really is someone that is willing to be vulnerable, especially when it comes to righting wrongs. She’s a teenager who doesn’t always get things right, and that’s ultimately okay.

The addition of Susan as a queer woman of color is so amazing. In Jonesy #2, she reveals her secret crush, and she and Jonesy talk about it like any other teenagers would. Don’t tell! Other than that, her love for Nisha is treated as normal. These elements of storytelling are vital in enhancing representation and revealing that queer people are everyday people, even if we have specific stressors. Between the presence of Jonesy and Susan, I’m rather upset that we only have two more issues of this series, as they are both awesome and representative of many people.

Sam Humphries crafts a narrative that is full of enjoyment, teenage angst, and well-rounded emotion. These elements are conveyed perfectly throughout the issue, as they reflect real feelings many of us had as teenagers on the job or with friends. I particularly like that Humphries makes a full circle regarding Jonesy’s actions, which were pretty likely to bite her in the butt. She’s shown as remorseful and openly apologetic rather than simply carefree, an important touch in creating narratives surrounding mistakes. The interplay of each of the characters drove the story and I appreciate that their personalities were distinct and fresh pieces of the overall issue.

The funky and emphatic style of art is perfect for Jonesy’s world. She’s young and full of energy, and each panel matches her personality. Caitlin Rose Boyle works creates crowd scenes, packed with people and objects, without losing a unique touch for each body. From start to finish, the emotions are engaging and all over the page, displayed with Boyle’s deft artistry. Mickey Quinn’s colors are warm and inviting, working within a range that blends with the level of activity in this issue. This scheme felt like a very deliberate stylistic choice that works well for the story and art overall.

Jonesy #2 is a great all-ages comic that I highly recommend. The story is relatable and there’s some great inclusivity that reflects what we need in comics as a whole. While I strongly suggest picking up the first issue, the second stands by itself rather well, so even if you jump on at this point you’re sure to have a great time.