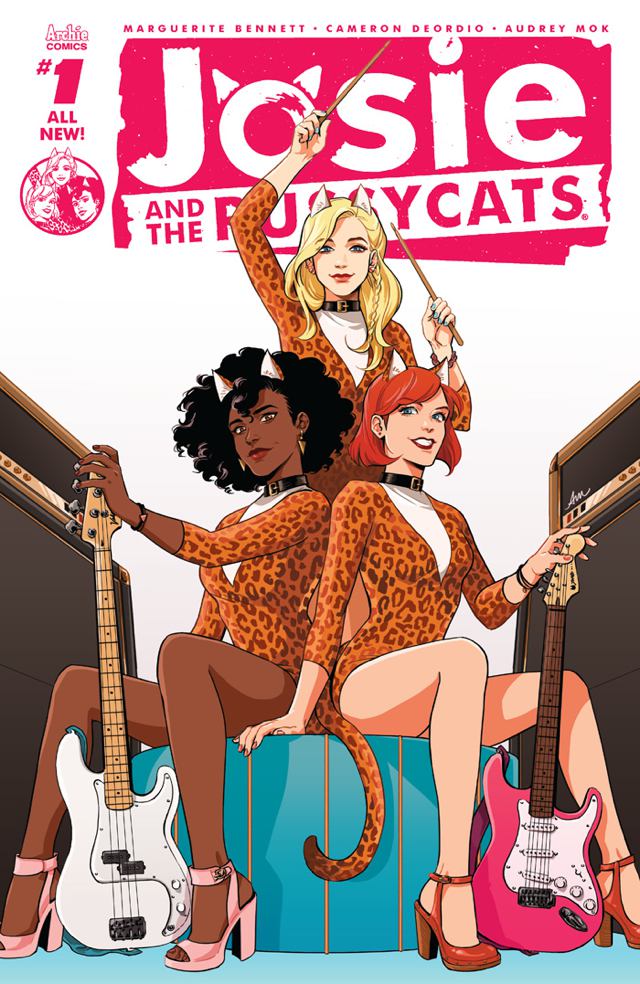 The latest modern update from Archie Comics takes some old favorites and creates a mixtape with the newest and hottest comics talent. Josie is looking for a musical creative outlet. However, the daytime bar scene isn’t having any of it. Mix in Josie’s best friend and a reluctant but talented veterinarian and you have the newest Josie and the Pussycats.

Fans of the original series will recognize supporting characters like Alexandra Cabot and Alan M. The story does a great job of setting you in an already established world, while creating a believable scenario for why Josie, Melody and Valerie would create a band. The story goes a little sideways when Alexandra looks to tear the band apart with gossip. From everything the reader has been shown, there isn’t much set up for there to be any truth to the gossip that is being spread around. However, it’s how Josie approaches the accusations brought before her that makes this story feel like the writers are attempting to be genuine and make Josie a healthy example. Melody’s characterization of the “ditzy blond” continues without too much over the top zaniness. All the characters spend lots of time actually singing, which may feel familiar to fans of Marguerite Bennett’s other works.

The art team’s bright colors and constantly moving characters create fun panels. Large eyes, wide face and the occasional star show a strong manga inspiration for the art style. It’s a comic that is clearly targeted at a younger teen audience, yet can be enjoyable for readers of all age groups, especially older fans. Jack Morelli’s lettering does a great job of playing around with the music notes and other features of the artwork. At one point Mok and Szymanowicz use swirls and colors to evoke the musical talents of Valerie, selling the idea she has broken into song in the middle of the animal shelter.

This book is a sold introduction to the rebooted universe of Josie and the Pussycats. There is plenty to remind longtime readers of characters gone by and enough modern points of view to keep new readers around. While there is no strong humor like Jughead or the different point of view nostalgia of Betty and Veronica, there is a sincere look at women, friendship and newly formed interests and goals that makes this book unique from the others Archie Comics offers. It will be interesting to see the bands newest way of rising to the top of the charts, and how they handle newfound fame.