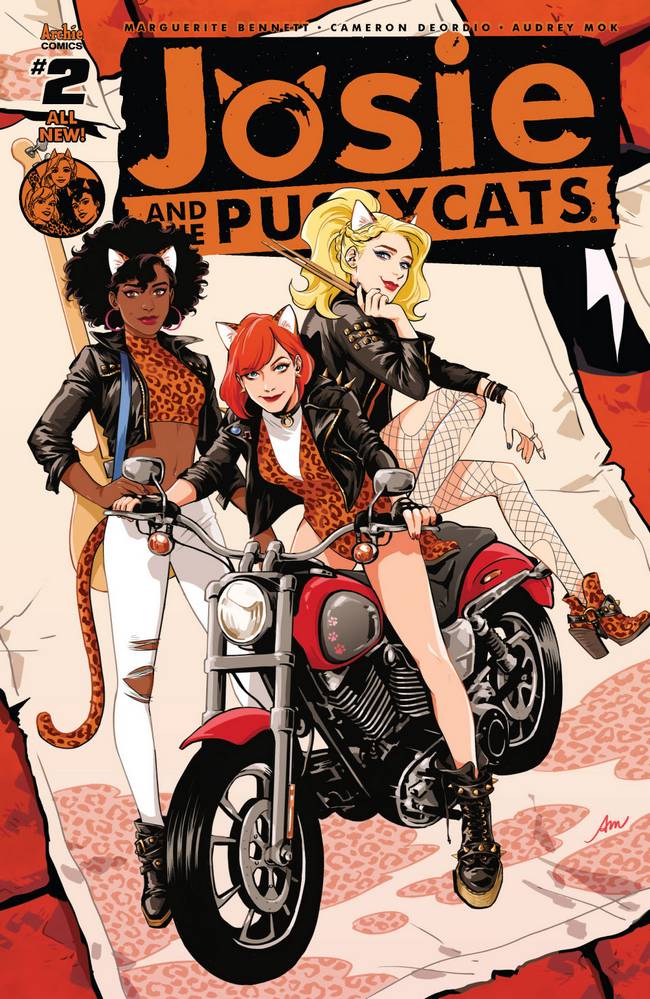 This isn’t an Archie Andrews fantasy!

Josie, Val, and Mel are on their way to their first gig. Josie has stars in her eyes, while Val is staying grounded and Mel has her head in the clouds. The venue brings them all back to the reality of stardom and starting small in sometimes smelly places. After rocking their performance, the Pussycats are feeling confident until they have their own wacky race to determine the fate of their careers.

I imagine that Josie and the Pussycats is a foray into Marguerite Bennett and Cameron Deordio’s minds, especially in this issue. The story is full of unbridled joy, humor, and pop culture awareness: and it works. There are some awesome one-liners that really make the dialogue and the issue and they are delivered with expert timing. I’m a fan of this writing, but I also recognize that taking this approach is risky, as it can come off as forced or overwhelming, and there are times when this happens in the issue. Still, I appreciate that Bennett and Deordio have created a series with classic characters that departs from their original format just enough while maintaining the lighthearted charm that makes the series what it is.

The main characters’ self-awareness is another risky but fun way to tell the story of the Pussycats. I’m a fan of breaking the fourth wall, but it has to be carefully done. Overt references to the story plot and structure are really humorous and well-done throughout the second issue of Josie and the Pussycats, and I can also see how it can go overboard. Yet, Josie and the Pussycats #2 doesn’t feel like a play it safe story. Instead, it’s an adventure and that helps it stand out among other releases.

Personalities are in the fore and they mesh wonderfully throughout the story. When things are calm, Josie, Val, and Mel are much more their unique selves, but when it comes down to the wire they interact in ways that highlight who they are as a band and as friends. Seeing them work together and play off each other was helpful for cementing their dynamics as the series continues.

Audrey Mok and Kelly Fitzpatrick really rock it out on the visuals. Mok’s aesthetics for each of the Pussycats demonstrate a knack for style and an important distinction between them, which helps to assert them as individual characters. This effect is important because Mok illustrates the band as not just the Josie Show, but that the Pussycats really are important. Fitzpatrick creates a stellar stylistic presence of the Pussycats compared to the secondary characters in the issue. Their colors are brighter and they’re done in warmer hues, even while wearing black. On the other hand, the rockers are cast in toned down colors, creating a sea of shadow to better emphasize the presence of the band. Fizpatrick makes sure that your eyes are on Josie, Val, and Mel in every page through the deft use of color, intensity, and shadow.

Josie and the Pussycats #2 succeeds at comedic and witty storytelling. This comic is a raucous dive into the journey to fame and fortune filled to the brim with characters who are the very definition of lively and dynamic. Overall I love how the series is done, but I also don’t want it to get too carried away in the future, as it could teeter the line between amazing and too much for many readers. Despite these factors, this issue is engaging, funny, and entertaining. Josie and the Pussycats doesn’t take itself too seriously, which allows the creative team to let loose. I can’t help but want to join the band on their trek to fame, and I like that kind of happiness in a comic.