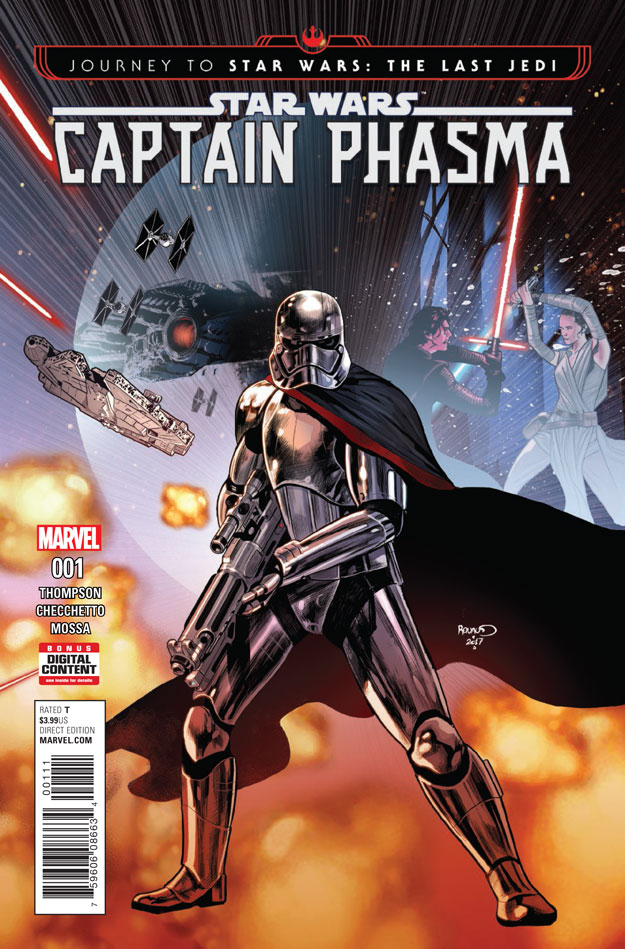 “Finally. Freak’n finally.” These are the words I uttered when it was announced that Phasma was going to be the center of attention for a comic run. Phasma has been reported by most viewers of Star Wars: The Force Awakens to have been one of the most visually iconic characters, yet one who was drastically underutilized. This was by no means the fault of what turned out to be a busy film, but a character like Phasma seems to demand some genuine attention. She’s a bad-ass, chrome plated evil Captain who seems obsessive about order and maintaining a strict code of order.

Imagine my delighted shock when this comic turns out to kind of just … blow Phasma’s stuffy, no-nonsense attitude apart. Turns out, Phasma has a really devious nature that isn’t about to let her get blown up in a trash bin.

This comic, in just one issue, says more about ‘what’ Phasma is than it really says about ‘who’ she is. If this comic plays its cards right, she could take on the more interesting aspect of Boba Fett’s character before he had a genuine identity. Fett was a pragmatic hunter who did whatever was required to get the job done. For decades, Fett stories could be told without ever needing to know ‘who’ Fett was.

Phasma’s story seems to offer answers to a sort of nagging question some viewers of The Force Awakens might have had, that being “what happened to Phasma after she was unceremoniously dumped down a garbage chute?” Writer Kelly Thompson and the continuity crew at Lucas Film have decided to make sure that every page of this comic is devoted to making sure you know Phasma means serious business and isn’t going down with Starkiller Base alone. She has a particular target she pursues in the comic and, believe me, it is worth it to find out why. It provides great insight into the fact that Phasma isn’t about to let anyone get in the way of her survival, friend or foe alike.

Marco Checchetto, who is not stranger to Star Wars having worked on the great Obi-Wan and Anakin series, gives dynamic life to every moment Phasma takes up on the page. What is refreshing, for this first issue at any rate, is that Phasma dominates every sequence that Checchetto draws her in. His style tends to give Phasma a tremendous sense of movement and grace despite her armor appearing like it could possibly inhibit her actions. Checchetto makes tremendous work of energy and fire, with Starkiller Base’s devastation giving great excuses for explosions that Phasma can avoid.

Checchetto and colorist Andres Mossa collaborate to really capture the ‘essence’ of Phasma’s chrome-plated splendor, with every layer in her armor and cape getting a A+ rendition in rich detail.

Journey to Star Wars: The Last Jedi: Captain Phasma #1 is a great ride that lets readers know about one of the most interesting new additions to the canon of Star Wars.