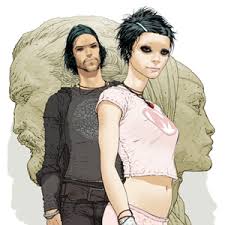 The superstar team-up of Millar and Quitely (who last worked together on The Authority) come back together after a long hiatus for a new creator owned title. Jupiter’s Legacy follows superheroes, who have now grown old, and their children who struggle to live up to their superhero parents.

The story starts, appropriately, with a flashback of the older superheroes of the present as young men/women. The opener was surprisingly mysterious and created a completely different tone than I expected from the first 5 pages of a comic such as this one. It was a fun opener, albeit slightly tough to believe. For what they were looking for, it took a huge leap of faith from the cast of characters and I found myself surprised at how quickly they followed the main character into his quest. Jupiter’s Legacy comes back to present day and introduces the successors to the superhero throne. The children have slivers of interesting tidbits, but the conversations and interactions ended up very typical of what is expected when you put together a bunch of spoiled young adults.

After a lull in the middle with the focus on the kids, the book picks back up in a big way with the heroes being introduced in the present day.  They steal the show with their conflict and dialogue. I’m not sure what path the book is going to take, but the more heroes of yesterday there are, the better. Once the kids have their time to shine and focus in upcoming issues, I think they’ll be able to hold their own in the story — but their parents are what made this book an interesting read.

The biggest surprise was the tone of the book. Not to say it is a bad thing, but Jupiter’s Legacy felt less and less like a Millar/Quitely book as each page went on. There was no in-your-face vulgarity, no blood and guts, and almost no violence for that matter. Upon my first read through, I spent more time seeing what they weren’t doing, and on the second read through looking at what they WERE doing, which was some impressive stuff. Toning it down let Millar show off his ability to characterize through dialogue, as the comic was full of clever responses and quick witted dialogue.  A lot of the sex and violence used to progress the story was done off panel or hinted at instead of being blown up in a splash page, and the decision to go in that direction is a smart one, as the characters stood out and defined the story. Anything can happen in a Mark Millar story, but if this is how it is going to be for the whole series, then it would be a pleasant surprise.

Frank Quitely’s art is astounding as always. There is one panel in particular that can only be done in a comic and is mind blowing on first viewing. His backgrounds and settings are second to none and everything just has that certain level of detail only he can provide. The only complaint I have is that some of the facial expressions seemed a little dead for some of the scenes. Especially in the beginning — when the cast was seeing something extremely unbelievable — they were all stone-faced, looking straight ahead.

Jupiter’s Legacy #1 is a strong beginning to the series. The title slightly suffered from too many people to introduce and too little space on the pages. While the superhero parents is what is keeping me going to issue #2, I think the children are going to be what pulls me in for the rest of the series. Jupiter’s Legacy is a title not like anything from Mark Millar and Frank Quitely and is a worthwhile way to spend $2.99.