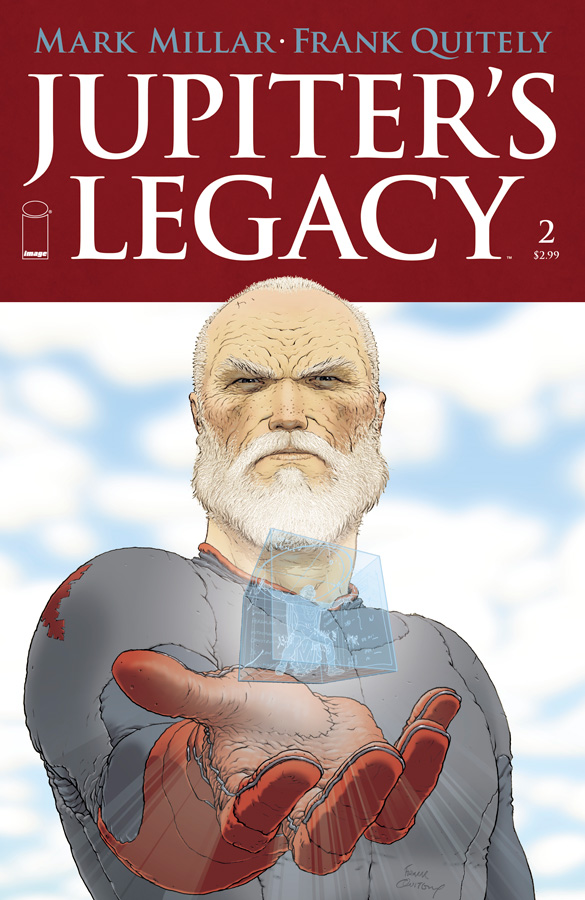 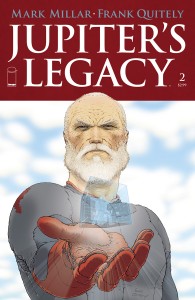 There’s an air of the classical about Jupiter’s Legacy, and not just in the 30s era pulp adventurer-and-his-family-on-a-boat origin Millar and Quitely gave us back in issue #1. At first glance this might seem to be yet another up-to-the-minute recasting of superheroes in an ultramodern, morally ambiguous, media and chemically saturated world. Super drinking is just as important as super-heroics. Escaping the paparazzi is more of a burden than escaping death traps. When characters scream at each other, windows shatter. But for all the references to millennial angst and the fiscal cliff, it’s a much, much older story that’s actually being told.

It’s the story of a good, aging king, and his irresponsible son. It’s the story of the ambitious, stifled younger brother, living in a shadow his entire life. It’s the story of the girl from a noble family who falls in love with the son of her father’s mortal enemy. It’s Henry IV, The Lion in Winter, and Romeo and Juliet, and maybe the best part is that you could read the entire comic without ever realizing it.

Because the great thing about family drama is that it works just as well now as it did in ancient Greece.

Usually the second issue of a new title with new characters is still working to set up the field and clarify what exactly is at stake. While this is certainly true of Jupiter’s Legacy, the way that Millar’s characters mix familiar archetypes into strong, particular personalities makes this issue feel much more established than most second issues. It’s an incredibly assured move to take the time to focus in turn on Brandon, the son whose half-hearted attempts to do good nearly lead to disaster, Chloe, the daughter facing a responsibility she didn’t expect, and Walter, the brother trying to make his own mark on the word. The Utopian — Miller and Quitely’s regal Superman figure — is inescapable, but also left, rightly, as something of an enigma. We may admire the hero, but it’s often easier to relate to the people who struggle to live up to (or escape) his example.

A great deal happens in Jupiter’s Legacy #2, but it’s never rushed. Quitely’s letterbox panels provide an active but uncompressed pace, while subtly creating an atmosphere where the most personal moments can never entirely escape the broader, almost mythological demands placed on the family of the perfect man.

I won’t spoil the turn the story takes on the final two pages, even if it’s probably not that much of a surprise. After all, if you’re paying attention, you know that you’ve read this story before, but it’s still a pleasure to watch a pair of masters tell it again with every bit of their skill.