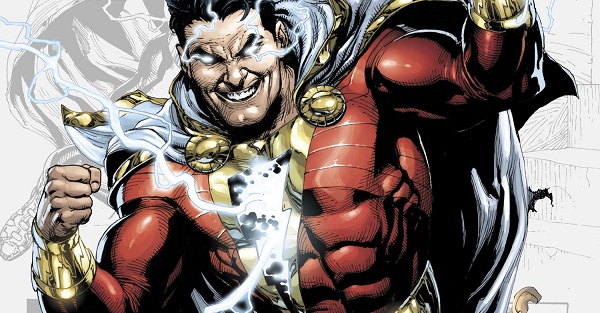 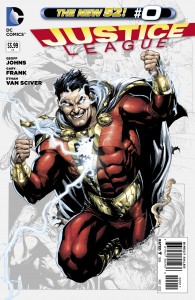 Flash back to… today, as we follow Billy Batson into the Rock of Eternity and witness his stunning transformation into the hero Shazam! As he and Freddie Freeman explore his newfound magical powers, we get a glimpse into what Pandora has been up to and why. Plus, another glimpse at the return of an older hero in The New 52!

For fans of Shazam (the hero formerly known as Captain Marvel), the last six months must have seemed to drag on forever. With only an 8-page back-up story in Justice League #7-11 to develop Billy Batson’s new world order, we’ve only gotten the equivalent of two full issues worth of story in what could have been more. Frustrating as that has been, some of that gets paid back in this month’s full-size story. We’ve met Billy. We’ve met his new foster family. We’ve met Black Adam and even Tawny the Tiger. Now we meet the Wizard.

Johns has done a great job at depicting the reality of a kid who’s been shuffled through the foster care system (even been homeless sleeping in a train station) since the death of his parents. In my estimation, stripping away the advanced goody-goodness of young Billy makes for a much more compelling character. That said, I bristled a little at the direction the story takes, since Billy’s character doesn’t change as readily as his physical appearance upon shouting that magic word (with intention – the new way around not being able to speak your own name without losing your powers). Yes, this still is a more realistic tale than the Golden Age interpretation of Shazam that never seemed to gel with the DC Universe as a whole, but it does seem less… magical that it should. The joy that exists in a character like Harry Potter, for instance, is that despite his terrible upbringing and tragic loss, he can still put hope and courage ahead of selfishness. I am confident Johns is taking Billy to that place, but I can understand the eagerness on the part of his fans to get there faster.

Frank’s pencils here, as in previous chapters, are nothing short of gorgeous, however. No one draws “heroic” like Gary Frank and it shows here as clearly as it did in Superman: Secret Origin. His Shazam fills the room with exuberance upon reveal, and at times seems to really channel C.C. Beck (the artist behind Captain Marvel’s creation in 1940). The best details for me, though, are Shazam’s facial expressions mirroring Billy’s so closely. It’s clear from the art alone that Shazam is still a kid deep down inside his newly muscled frame. His expressions betray him to great effect. Van Sciver’s portion of the book is short, although very well done, depicting Pandora continuing her interaction with the box reacquired in May’s Free Comic Book Day New 52 special.

More than the story as a whole, some of the potential storylines spinning out of this issue get me super excited about the next year in Justice League. Yes, this is essentially Shazam’s origin, but many more questions than answers are raised herein. If Billy is the receptor of the power of one wizard, will his five foster brothers and sisters receive power left over from 5 of the 6 others? What will put Billy on the path of righteousness fast enough to gain him admittance to the Justice League in three short months? And just when are we going to see more of that mysterious character on the last page?

That last one, in particular, could be the most important question of all.