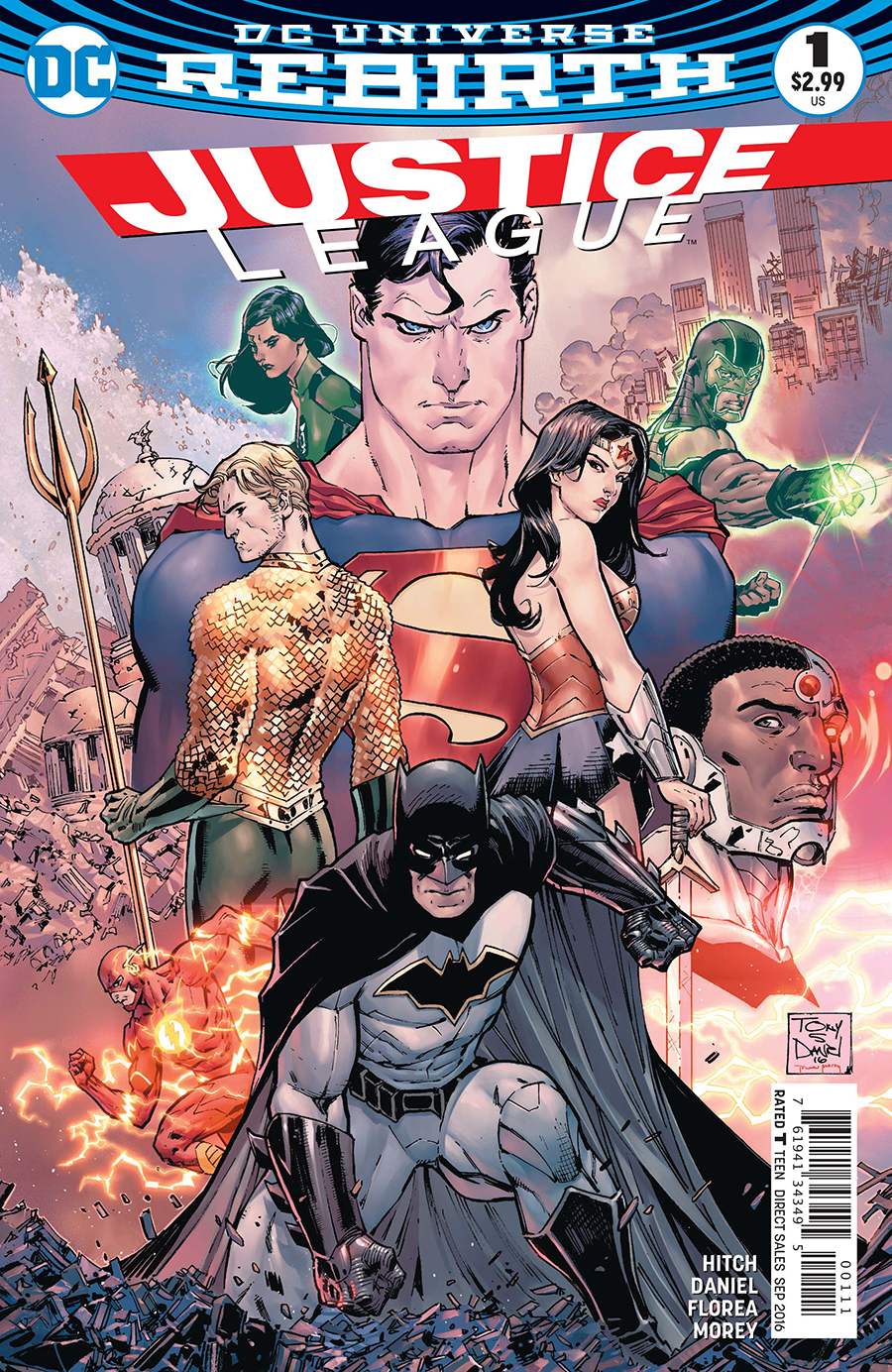 You can almost hear Tina Guo’s cello from the Batman v. Superman: Dawn of Justice soundtrack (no matter what you thought of the movie, you have to admit that new theme is badass) as Wonder Woman tears through the Russian army in the opening scene of Justice League #1 — proclaiming a mission of peace in the Richard Starkings-crafted caption boxes while her Tony S. Daniel-drawn fists pummel the soldiers and tanks fly into the air, like Styrofoam packing peanuts flung about as collateral damage.

Writer Bryan Hitch gives Diana the first seven pages on the way to giving her a full ten pages of Justice League #1. The rest of the issue is less teamwork or team building, but a check-in with the main League members as they react to the threat washing over the Earth. Superman’s prominence on the cover does not translate to the story, as he is only depicted in three panels, and each of those is from behind. Batman has a few pages, as do Flash, Aquaman, and Cyborg. The Green Lantern duo of Jessica Cruz and Simon Baz are on hand as well, operating as a team throughout the issue.

The story is serviceable, but not particularly memorable. Hitch has crafted a faceless, nameless, powerful threat that calls upon the combined might of the Justice League, but only the eight characters in this issue. Truly, if the world were threatened by an extinction level event, the League would, at the very least, be coordinating with their alumni, if not sending an all-hands-on-deck to the entire superhuman community. Hitch has made the threat seem bigger than life, but does nothing to indicate that this should be a Justice League-specific threat. Yes, this is the first chapter, so I am keeping my saltshaker handy.

Tony S. Daniel’s drawings are intensely detailed, describing the world, the problems, and the heroes nicely. Inker Sandu Florea and colorist Tomeu Morey embellish the drawings nicely, enhancing the detail Daniel packs into his smart storytelling. In some spots, however, Daniel chooses rigid poses for his figures, trying to present a different perspective or creative interpretation with familiar poses. The intent is clear that Daniel is trying to craft new iconic images for these legends of the DC Universe, but showing Cyborg’s superhero landing from the side, while theoretically sound, falls about as flat as a character dabbing would in comics. The visual motion isn’t there to carry the pose through.

It’s not a fault of storytelling, but maybe of keyframe choice. I know this story went to press weeks ago, but following all of the fervor about Wonder Woman’s appearance last week, this seems like an ill-chosen time to feature a comic that has the Amazing Amazon depicted from side or behind-and-looking-over-her-shoulder in two-thirds of the panels she appears in. For the most part, though, Daniel, Florea, and Morey bring the goods. The two-page spread of Flash running to save a little girl named Jenny (inspired choice there, Hitch) is a complete Flash story in jut two pages.

Unfortunately, the bobbles in Justice League #1 aren’t just in character poses, as having two Green Lanterns handcuffed throughout the issue gets a little jumbly. When Jessica and Simon reach Hong Kong, their word balloons get confused, with tails pointing across conversations and attributing dialog to seemingly the wrong speaker. Either that or the script is shaky for Cruz and Baz.

Justice League #1 isn’t the most magnificent presentation of the world’s greatest superheroes. It’s also far from the worst. Hitch, Daniel, Florea, Morey, and Starkings are trying to build worlds in this comic. They’re attempting to add to the depth of the DC Universe canvas, deliberately choosing to not use familiar universe-threatening terrors. It’s a good idea, but for a first issue, the League needs to do a little more forming or, at the very least, collaborating against a recognizable foe that inspires readers.