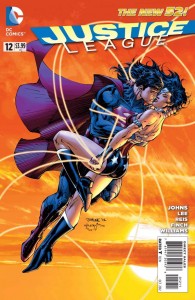 Year one of the New 52 ends as it began: not with a whimper, but with a bang.

Wrapping up the title’s second story arc “The Villain’s Journey,” issue twelve concludes the battle with David Graves, former Justice League chronicler turned enemy. Using the team’s lost loved ones against them and exposing their rivalries to the public, Graves sets the superhumans on a new path toward being the heroes the world needs them to be. And along the way, a single kiss has repercussions that will lead to war… and a brand new team.

Unless you’ve been reading the internet in a bubble over the last week, you’ll know by now that this issue features the first kiss between Superman and Wonder Woman, as they cast history aside to become DC’s big power couple. I have to admit I’ve been fairly indifferent about the development until now, not necessarily hating the idea, but not seeing the value behind it either. The scenes crafted by Johns between Diana and Clark (as well as between Diana and former beau Steve Trevor) actually changed my mind. There’s a sweetness, as well as a foreboding, that comes with their interaction, setting up the next step for each character in the shared DC Universe. The dialogue throughout this issue, in fact, is so well-crafted and heartfelt, that I feel like we’re getting to the root of these characters — some possibly for the first time in the New 52. Hal Jordan moves from cocky to valorous, Batman shows a very rare soft side, and Aquaman continues to assert the leadership that only a truly great king could.

Lee’s art suffers a bit from an overabundance of inkers, but still manages to keep the action kinetic and exciting. Until now, I’ve never particularly noticed Lee’s treatment of his characters’ eyes and how emotive the end result is. There are some compelling spreads here, but none feel gratuitous to the overall narrative. Added bonuses in this issue are a three-page reflection on what has come before (for those readers just picking up the book for the first time) and a four-page epilogue establishing the threads that will carry through this book and its new sister title, Justice League of America, in 2013.

Overall, a heck of a lot happens here, and for a book often criticized for being the worst example of decompressed storytelling in the New 52, that’s a great turnaround. If you’ve been disappointed in the past, this might be a great issue to try (if only for its newfound historical importance). If you’ve been enjoying the book to any degree to date, you’re in for an incredible treat. Enjoy!