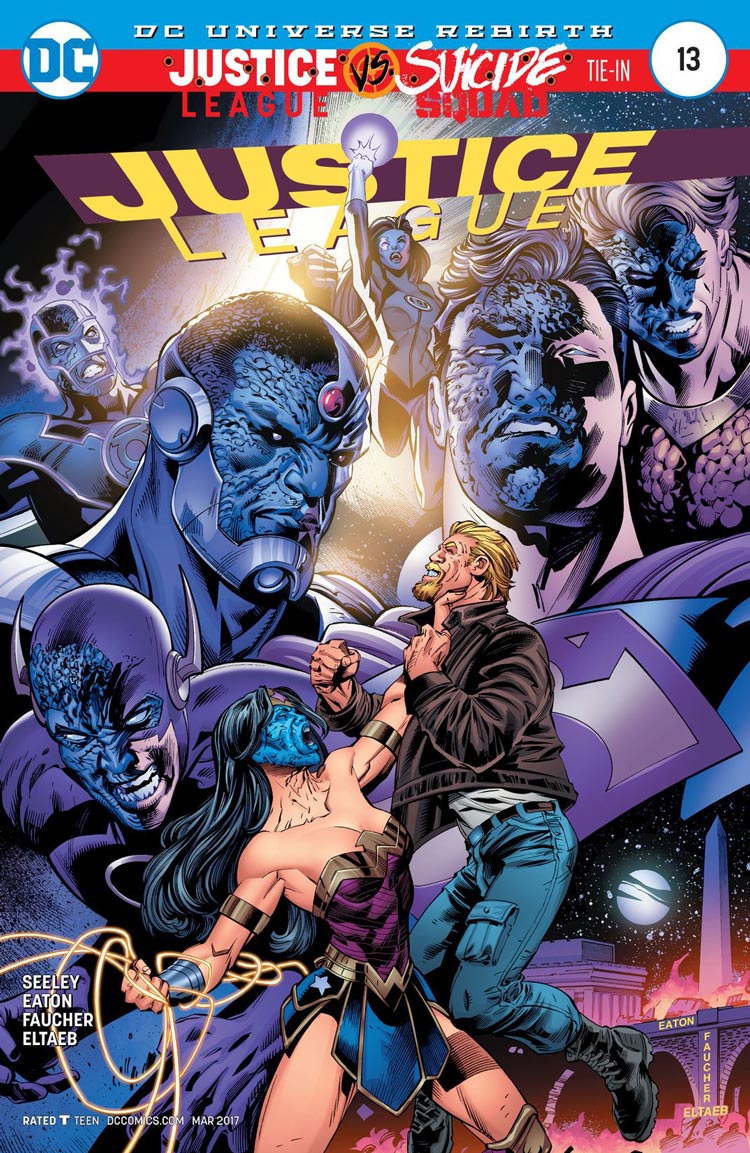 Despite what has been a fairly amusing event through the Justice League vs. Suicide Squad storyline, Justice League #13 seems not only bizarrely disconnected from that event’s importance, but it also seems to simply be in poor taste.

None of this is the fault of Tim Seeley, but I finished reading this book wondering who thought any of what was within this book was a good idea on a developmental level. Seeley gives his best shot at what is clearly a particular book with particular need (tell a story in a Justice League comic with no use of any of the JL characters), but in the end, Justice League #13 is something that should be avoided unless you come across said story in a trade paperback format. And even then, I might advise you to skip it.

The heart of what I found most wrong about this story was actually something I didn’t expect from such a title: the extremely strange propensity for violence. While part of me wants to say this is part-and-parcel to using Eclipso, one of DC’s worst villains, I was shocked at Steve’s killing of one character, a woman who becomes possessed by Eclipso’s darkness as it spreads over the world.

The character is killed and then, in the next panel, Steve assesses that she was a victim of some kind of infection. I am not sure what prompts Steve’s reflective assessment since he puts the character down so quickly and in an “impulsive” fashion. My own reading expectations are obviously going to differ from what those of a writer and artist are going to have in order to tell a good story, but that is the heart of the problem:

Eclipso is never a good story.

The nature of Eclipso’s hold, how everything is happening, etc… is not explained. After the events of JL vs SS, Eclipso isn’t explicitly a main player, Maxwell Lord is, but here it seems the opposite. I am not sure what the original release plan was for revealing Lord (as opposed to Eclipso) as the villain, but here it seems like you could remove any and all reference of Lord and this comic could have come straight from the 1990s.

People being eaten, random murders, torture of mothers by children, etc… One particular panel involving a woman and her dog made it clear that the intention was to try and have this issue come across like an issue of the Crossed series. Unfortunately, as far as a Justice League comic goes, the panel in question not only didn’t work, it was actually somewhat shocking. Again, I say this because this is a Justice League comic. Considering the League isn’t even present (outside of a single Wonder Woman cameo), everything in this story feels off.

Finally, there is the ending. Steve Trevor, the story’s focus, comes face to face with something genuinely awful. There is then a set-up to imply, perhaps, that everything within the comic was all in his mind. At least, that is what being set-up, although that isn’t how the book ends.

It is actually hard to write about the last few pages because I can’t explain what happens. Panels transition from Eclipso’s hold on characters being secure, then we see inside Steve’s mind, then everything appears normal, and then everything is … back to being hell on earth? The disjointed ending weakens an already poor book. This may well have just been my experience, so if this comic’s ending makes sense to you, awesome. I found myself confused by coloring and narrative choices that seemed to support one story outcome, yet the final few panels suggest another.

Concerning the art, Eaton’s designs are great. From the creepy, morphed faces of those Eclipso has corrupted to the depictions of violence, the aesthetics of showing the corruption consuming the planet is on point.

Special praise should also be given to the Wonder Woman cameo and the facial transformation present. The monstrous, other-worldly quality of the art is paired well with the dark and moody colorings of Faucher. Given the purple, black, blue and silver color scheme Eclipso demands from his use, the art clearly suits this choice. The world is suitable shrouded in deep colors and the highlights used emphasize dread.

While I personally didn’t enjoy the “princess” panel, there should be praise given to the dread and style of what was created. In any other comic, such a sequence would rightfully deserve its own place as the last, “hook ‘em in” moment to transition into the next issue. The art does a tremendous amount to make the case that Eclipso’s world is one of blood and fear.

In the end, much of my comments can be ignored if you enjoy a change of pace that sees horror injected into your comic narrative. Indeed, I can think of quite a few people who would enjoy this comic, so don’t mistake my own gripes against WHAT was shown to be more prescient than WHY these things were shown.

In the end, Justice League #13 wasn’t a good comic for me, but I hope I am clear about what baggage I bring into this comic from the start. Eclipso is never going to be something I enjoy seeing used, but I think where Seeley and his artistic team succeed is crafting what the narrative needs: they needed to show hell on earth.