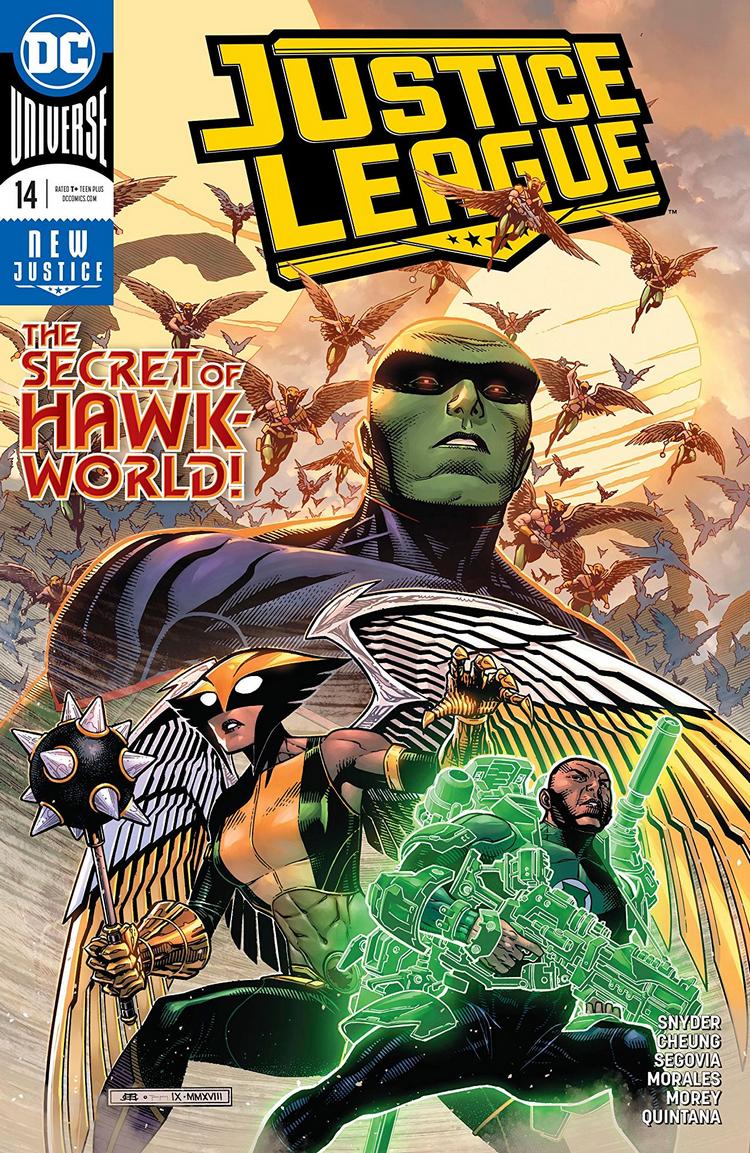 The secrets of Hawkworld are set to be revealed in the opening for the new arc of Justice League. In the wake of Drowned Earth and the most recent Legion of Doom highlighted issue, the Justice League title catches up with our trio: Green Lantern, Martian Manhunter, and Hawkgirl as they make their way to Thanagar Prime to hopefully get answers to mysteries about The Totality and recent developments specific to themselves. Not to leave the Trinity without anything to do, Tynion and Snyder give a push when it comes to Starman that opens and closes the book quite nicely, giving the book a nice A and B plot.

With the meat of the issue focusing on Hawkworld, it’s a grand introduction to the secretive homeworld that we’ve only glimpsed in Dark Nights: Metal. Segovia handles the penciling and inking for the Hawkworld sections and does the job well, giving the planet its own look and making our heroes save for Hawkgirl feel distinct and alien on this world. It’s a mystical looking planet as soon as we lay eyes on the “Raptor Superstructure” bathed in its golden glory around the planet itself. Quintana’s colors outline our trio amidst the sunshine and winged warriors that populate the locales and skylines as our three heroes meet a familiar face upon their arrival with ties to Hawkgirl! Segovia keeps the focus on the characters as they meet and discuss pressing matters that have to deal with why they’re here in the first place. His pencils showing the distinct differences in the characters as the story calls for more of Snyder’s and Tynion’s story to be talked through than anything. His pencils capture the character’s emotions as they discuss what’s happening to them or explain the ramifications of events that led them here. With Quintana’s colors, his pencils suit the characters well with the backgrounds sometimes being only one character to fully focus on the characters and their dialogue.

Tynion’s writing balances the grandiose scale in which these characters operate, interactions that show how continuity and relationships come into play with characters old and new. As a Hawkworld story, Hawkgirl takes center stage as a few ideas and characters pertaining to her history come into play in this arc opening. Tynion writes our Hawkgirl with plenty of thoughts to process given a surprising reveal in the issue that comes back to bite our cast towards the end of the issue. The Hawks of the DC Universe have never been a group of characters that you can properly nail down because of their complicated history and Tynion recognizes this in Hawkgirl and pushes forward with one of the key focuses that both he and Snyder have made this run on Justice League about, secrets. Hawkgirl is ready to discover the hidden truths beneath the surface of Thanagar and with her fellow heroes trying to discover themselves in this planet way from the rest of the universe, they might not be ready for what’s in store. Segovia and Quintana work very well together on an issue that focuses more on the characters than the exotic location they find themselves on. The art from the two have a sense of the individuality two characters share and seeing how their paths differed is a sight to see. Snyder and Tynion’s story comes to a close for this installment on Hawkworld with reveals that help to unite two connected plots and character missions that’re pushing the narrative forward, suffice it to say, things are bout to get complicated for our interstellar trio!

In the B-Plot of the issue, Cheung and Morales give us a check in with the Trinity, Starman, and Jarro that could spell doom for everyone on the planet. In just three pages, Cheung gives us sharp and detailed pencils and inks of the Trinity and our comatose Starman who ends the issue with a problem that’s going to need immediate fixing. Morales colors alongside Cheung’s pencils and inks have never failed them and this issue’s complimenting pages is no different, carried with Tynion’s narration that shows the power and intimacy of a secret the pages say all that they need to through the art. The inking increasing the colors in all of their vibrancy while short in length are some wonderful looking pages.

Justice League #14 focuses on a different kind of a trio of our heroes that finally begins to uncover the secrets of the Multiverse and what it means for them. The story from Snyder and Tynion puts the spotlight back on previous locations seen in Metal and events of the current Justice League run, making everything feel apart of the grand design the writers have in place. With art from Segovia and Cheung that gives their respective section the unique feeling they deserve, the issue sets up the adventure on Hawkworld quite nicely.