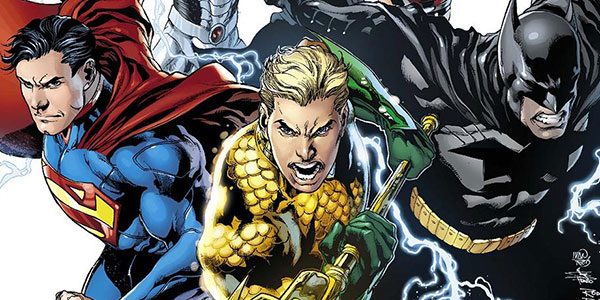 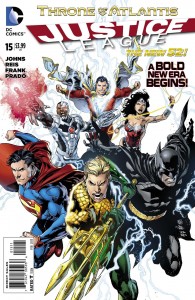 The surface world is under attack by foes from under the sea and it’s up to the Justice League to prevent total devastation. Will the new union of Superman and Wonder Woman strengthen or weaken the World’s Greatest Super-Heroes? Will the divide between Batman and Aquaman prove too great to bridge? And what will happen to the team when they discover just who is behind the impending war? Throne of Atlantis begins here!

Johns continues the increasing personalization of the League members since issue 12’s pivotal kiss between Superman and Wonder Woman, breathing much more complexity into every member than we had seen for most of the first year of the New 52. The interplay between Clark and Diana is lovely, with Superman expressing his core humanity in such succinct terms it’s a wonder no other writer has managed to get to this point yet. I’m really enjoying seeing Batman and Aquaman play off each other — as they haven’t had much of a history together as a teamed-up duo even before the DC relaunch — but nothing was as amusing to me as Mera’s first words to Batman as she arrives. I literally laughed out loud at her saucy provocation. Add in Lois Lane’s first encounter with Superman’s new girlfriend and this issue is a fantastic round-up of personality and conflict, without a single punch having to be thrown.

Reis and Prado’s arrival to the book is absolutely on par with their full-time predecessor Jim Lee, having transitioned from Aquaman at a most fitting juncture. Reis pencils every character to their most idealized form, but never loses the humanity behind the costumes. His Wonder Woman matches Mera in sheer power and self-confidence, while Superman exhibits every bit of the regality Reis has been imbuing Aquaman with to date. And when the action starts (beginning with a gorgeous two page spread of oncoming devastation beyond the Metropolis skyline), Clark and Diana’s transformation from dinner companions to heroic first line is truly inspiring. If this first issue is any indication, Reis and Prado will continue the massive success this title has seen artistically, and ultimately exceed its already high quality. This is an art team that deserves to be on DC’s flagship title, no question.

Johns and Frank continue the Shazam back-up here with brilliant art as always, never losing sight of the fact that Billy is a little kid in a grown man’s body. The story, however, feels like a retread of the last episode, only repeating Billy and Freddie’s somewhat selfish exploration of the power of Shazam. I’m hoping that some of what readers are feeling regarding the pace of the Shazam story will be resolved by a collected edition and inevitable expansion to a monthly book, but there are still some particular concerns. I completely understand the need to establish Billy’s immaturity, but a few things in particular here seemed to cross the line from childhood delinquency to outright criminality — only stalled by happenstance, not moral choice. This line of narrative is clearly at an end on the last page of this issue, however, so any worry is hopefully for nothing. If Geoff Johns can’t whip Billy into shape, there’s no doubt Black Adam can.

Overall, Justice League #15 is a perfect jumping on point (especially if you’d left the book behind at some point in the past year) for finally getting to know these heroes and their relationship to each other. No longer gods in the sky, these heroes are now truly growing into a team of peers (if not friends), and that is a welcome development to watch unfold.