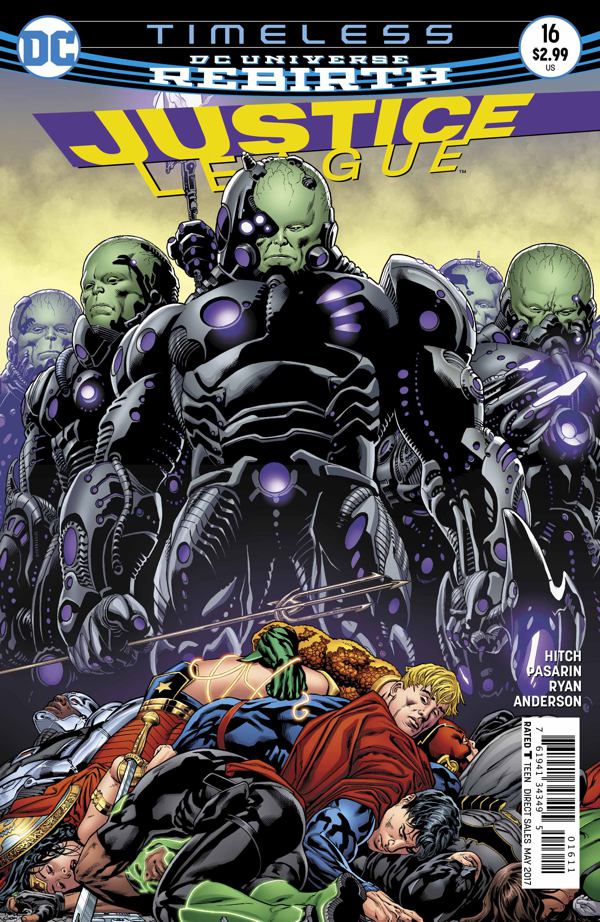 As the Timeless try to rewrite history, the Justice League is dispersed throughout the timeline in order to combat their treacherous plot in this latest issue of Justice League!

Hitch has chosen a fun scenario. The Justice League going on wibbly wobbly, timey wimey Booster Gold-esque adventure gives Hitch a lot of creative leeway to portray the mythos of the Rebirth universe and simply world build the timeline this particular earth has. Anything that reminds me of Booster Gold is going to make me a happy camper anyways.

I love Molly the Keeper as well as how Hitch portrays Batman and Superman. Molly being this omnipresent watcher of time and space is intriguing and I wonder if we’ll be seeing her around more, either in more Justice League arcs or in other comics. Batman is legitimately shown to be a good detective in this and his clashes with Superman make me love to hate Superman and love to love Batman. It’s great writing of their characters and I look forward to reading more of it.

Pasarin and Ryan’s art is wonderful. They’re allowed to flex their creative muscles with places like a decimated Washington, D.C. during the Power Plagues of the 26th Century and the peak of magic in an above ocean Atlantis 47,000 years ago, and the backdrops that they create are breathtaking. They take time to make each Earth Corps member unique or the intricate details on the Timeless ship and that’s awesome.

The coloring by Anderson makes distinct atmospheres for each time period. There’s an epic sense of cataclysm in Greece while Chronos lives, feeding off of his children for power as Zeus, Rhea, and Wonder Woman hide and seethe. There’s something inescapably bright about the 30th century, as if shining hope reigns in the distant future. None of these scenes would feel this way if not for Anderson’s coloring.

Is this Justice League arc a bit clunky due to the wibbly wobbly, timey wimey choice they made to go with time travel? Yes, it kind of is. But this slightly convoluted choice has given the team an opportunity to explore multiple events in the timeline, which has been super interesting to see. I’d recommend it if you’ve read Part 1 of the Timeless arc and are a fan of the Justice League comics in general.