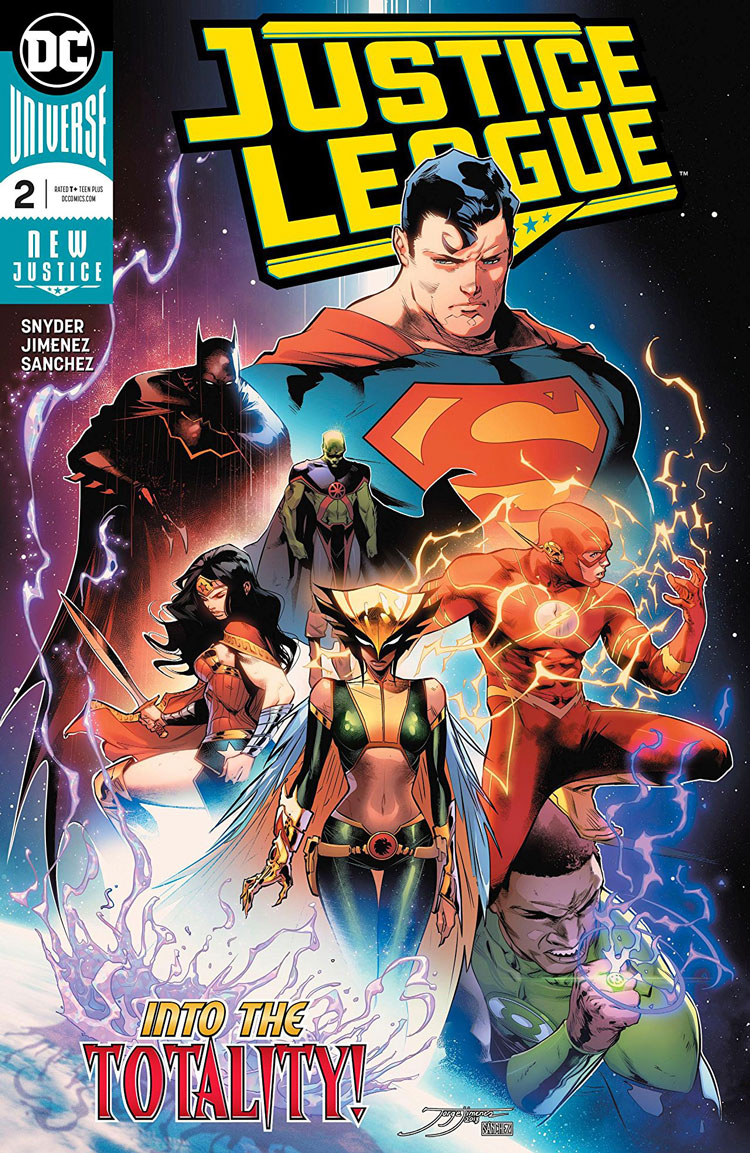 The adventure of a lifetime continues as the Justice League and the Legion of Doom race to understand and control forces far beyond their understanding in the second issue of Justice League.

Immediately, Jimenez’s pencils establish Lex Luthor as the shining businessman that he is, with all of the suave in the world. From charming to menacing all on one page, Lex remains a chaotic, yet central character to the events surrounding The Totality under Snyder. The narration continues as Lex begins his journey into the unknown and for the truth that leads to the focus of the opening arc.

Jimenez and Sanchez together are a dream made real with Jimenez’s pencils guiding the characters along as the dialogue does. Sanchez’s color work captures everything from the sunlight and shading on people’s faces, and slowly turns darker as the warm embracing Lex turns his opening scene of a buying and destroying a famed Clubhouse replacing the sunny colors that open the book with darker colors that then take us into space where Snyder makes the case for John Stewart.

John Stewart remains on the outs of the traditional super-hero team given the expansion of the DC cosmos in the wake of No Justice. There’s a lot of isolation to John’s story and Snyder is trying to rectify that given his history with certain characters in the new volume. Jimenez draws an otherworldly conversation between John Stewart and Batman via a surprising guest star.

Sanchez’s colors glow with a blue hue with the lettering being different because of who Batman is speaking through and Jimenez makes a great Batman rendition seeing his form is not his own and the guest star shifted into him keeping his specific character look in the process. What follows is a gigantic display of the forces of nature going haywire and everything being turned on its head with the rest of the Justice League fighting a once small time villain turned fully evolved threat!

Jimenez literally goes larger than life with the splash page giving special care to put the Leaguers in white outlines against the backdrop of the evolved foe. Smaller window panels alongside the splash page keep the established decay of the forces of nature coming with the League taking hits as Batman tries to recruit John into the fold again. Snyder doesn’t make it an easy acceptance on either person’s behalf and shows that the history between characters is still on their mind’s no matter how long ago it may seem to them or us.

Keeping pace with the heroic counterparts, the Legion of Doom seems ahead of the curve as Lex is quick to understanding and breaking down its secrets and how they relate to his new Legion, specifically to each and every person on said team. The new Legion design-wise looks great under Jimenez with the entire party all being vastly different from the lettering by Napolitano to how they approach Luthor on his plans. It shouldn’t be understated how well the body diversity and expressions Jimenez displays with the two teams and scenes of dialogue between them.

The Flash has some great bits as they prepare for the next step in The Totality search and Snyder really has a handle on bringing characters in and out of the spotlight, playing with the sandbox that is the DC Universe is doing the writer well and it’s showing. He writes these characters with a deep understanding of their personalities and how they bounce off of each other with some moments whispered, a running series of moments throughout with Napolitano.

Sanchez’s colors are a winner here at every turn from the depths of space with Sinestro and all of it’s dark hues unlocking a secret that causes immediate trouble and adds to the Green Lantern mythos doubly so, to the sunny desert that houses the location of the arc’s game changer. It gives Justice League its signature shine and sparkle, combined with Jimenez’s kinetic energy bursting through the pages and Snyder’s push for a team rotation approach giving certain characters the spotlight or using specific heroes as needed…the creative team puts their stamp on Justice League making it a book you need to read to believe.

Justice League #2 keeps up the pace of the ushered in new era of justice in the wake of some cosmic events and builds on them in surprising ways. Snyder has a truly rounded out cast to play with and underappreciated characters are rising to the occasion thanks to it. The writing with characters like Lex and J’onn continue to be an exploration of two longtime characters that have a refined focus and purpose and Snyder seems to have fun building on the sense of adventure and dread that both the Legion and Justice League are headed down.

With the focal point of the inaugural arc coming into play, the furthered world building of different Heroes and their mythologies coming under fire, and moments of levity and adventure, what’s not to love in Justice League?