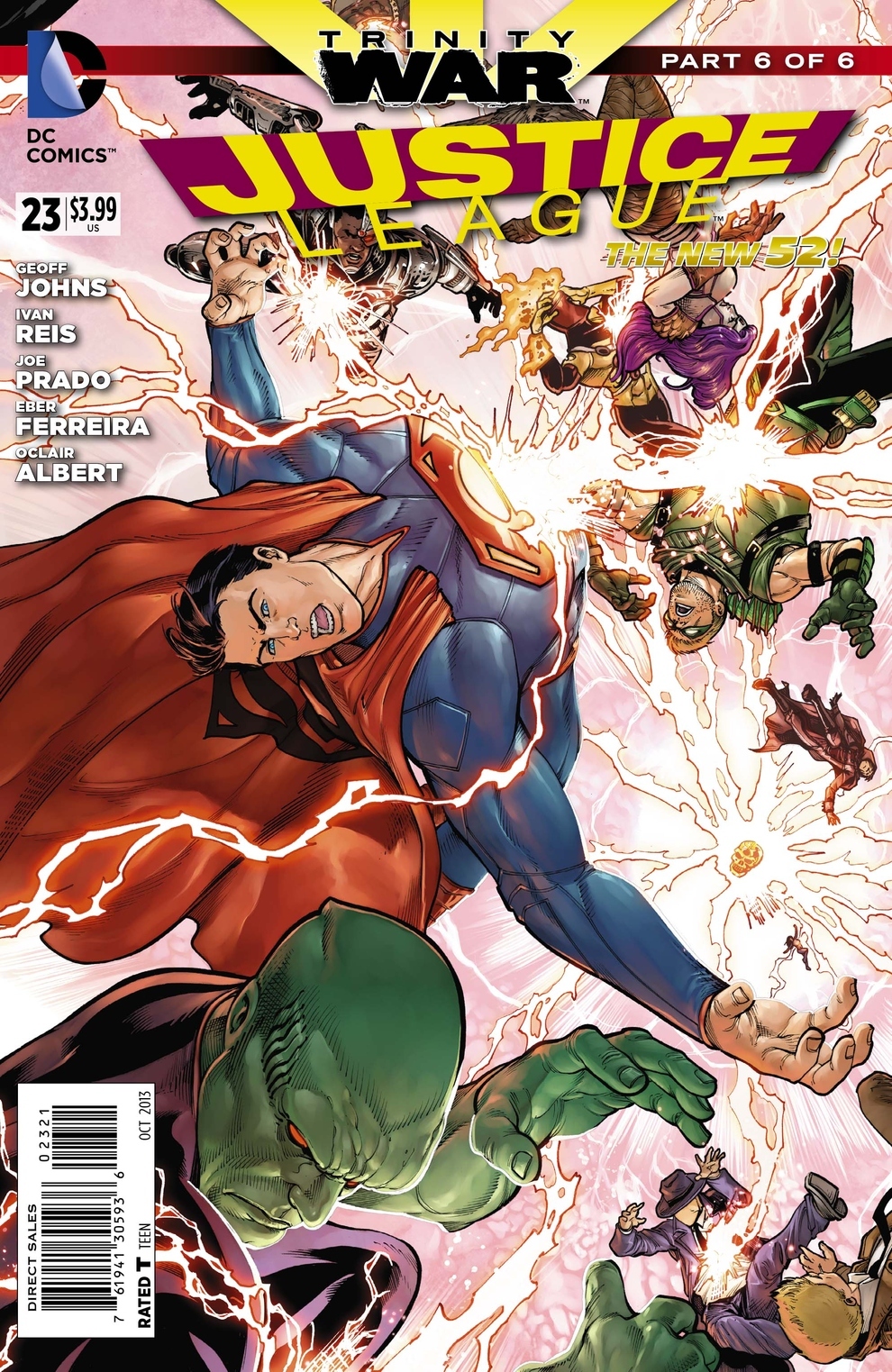 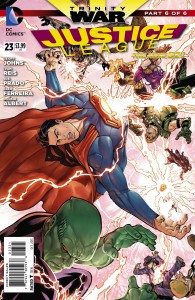 After months of prelude, five issues of conflict, and clues spanning two years, Trinity War has reached its conclusion and nothing is as the heroes expected. The Outsider’s true plan and depth of involvement come to light, leaving Pandora and the Justice Leagues blindsided by the true nature of that deadly box this woman of legend suffered so much punishment over. And worst of all, this is only the beginning, leading the entire DC Universe into next month’s Forever Evil event with grand style.

If you haven’t figured it out by now, Johns definitely plays the long game, and nowhere is that more apparent than in this very issue. Like issue #22, it’s difficult to praise this chapter without spoiling its contents, as so much of what makes this installment great is the rapid fire release of answers to the questions we’ve all been asking: Who is the Outsider? Who is his mole on the Justice League? What is the true nature of Pandora’s Box? What really caused Superman to kill Doctor Light? What, finally, does the Trinity refer to? We get a recap of the history of the League (including a sneak peek at one adventure in which the Manhunter participated before he was summarily discharged), the revelation of yet another incursion occurring due to Darkseid’s invasion, and are introduced to the villains who will be taking over the DC Universe over the course of the next few months — characters who, thankfully, haven’t been overused in the course of the past few decades (and just happen to be my very favorites, to boot).

If this chapter has any faults, it’s that it becomes a difficult issue upon which to judge characterization, as the fight between the heroes that thrilled me in Justice League Dark #23 continues on a fair number of pages longer than I’d hoped. Heroes are still affected by the Box’s aura, although Constantine remains his perfectly tarnished self. We do get a clear answer, for the continuity-minded, why Mera was in that teaser fold-out way back when in the New 52 Free Comic Book Day edition, and it’s a tad bit more clever than you think. The real stars, appropriately, are the villains — ready to take center stage and shove the Justice League off into a corner for a bit. Johns’ treatment of the Outsider is at once comfortingly predictable and a tad unnerving, given his true identity, and the surprisingly chipper banter between at least two of the newly arrived opponents makes me think they could get my cheers as easily as the Leagues themselves.

Ivan Reis once again knocks the art duties out of the park, proving that he was born to illustrate the Justice League. Gorgeously perfect facial expressions, subtle body language between characters, big disaster-level action scenes — it’s all in Reis’ wheelhouse. And the near double-page spread of what is perhaps the most shocking, and a fair bit gross, scene I’ve seen all year only reinforces the mastery he has for detail without sacrificing fluidity of line in the process.

An extremely exciting wrap-up to a story that’s only just begun, Justice League #23 feels very much like the touchstone moment for the New 52 that it’s most certainly designed to be. Johns and company have clearly done their job in maintaining this title as the true flagship book for the larger DC Universe, blending the best of hardcore action, intrigue and character moments to flesh out this still relatively new landscape. As a capper to an event eliciting high hopes among fans of the Justice League, in my opinion #23 delivers on its promises and sets readers on course for quite an enjoyably bumpy ride into year three of this grand adventure.