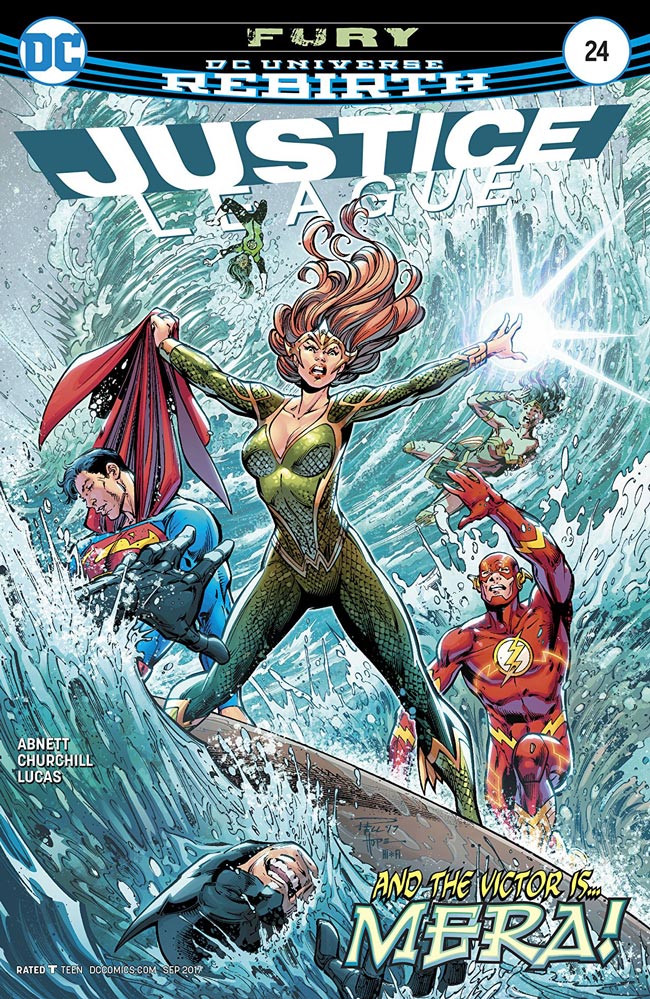 Regular writer of Aquaman, Dan Abnett, and artist Ian Churchill are filling in for Justice League and filling out the character growth of Mera. Often relegated as an extremely powerful sidekick to Aquaman, Mera gets a full issue to show the force of her power as well as the strength of her cunning.

There have been a few scenes over the last year, of Arthur’s downfall in Atlantis, from Mera’s point of view. There hasn’t been just a large amount of page space for character development or focus on just Mera. This issue provides an opportunity to show just how she has processed all of this.

Ian Churchill and Adriano Lucas waste no space in the action and adventure. With the Justice League fighting short-tempered Mera, who is trying to breach Atlantis’s magical barrier, there are massive amounts of fighting and water. The level of detail from waves to whips of wet hair floods the reader’s eyes. Overlapping questions of concern, confusion, and fighting come together in a sea of panels, sometimes with beautiful layouts where only minimal bubbles or water act as borders. The consistency in faces also keeps you engrossed through the issue.

The Justice League, in typical comic fashion, each individually attempt to subdue Mera. She rightly and easily shows each one how water can be the great equalizer to those with super-human abilities. It’s one of those issues or topics you can just picture fans debating: Should Mera have been able to take the League down so quickly? Abnett’s dialogue toward the end of the issue actually provides plenty of context for Mera’s cunning. The whole fight sequence and climax show the importance of Richard Starkings’s speech placement and lettering.

In the copy I read, there was one instance where a candy ad created confusion for a split second between the comic and the advertisement. This is not something the create team can control, however it was enough to pull myself out of the story and create a jarring effect in the reading.

There are other readers who may not care for one issue stories and feel like the problems were rapped up too easily. Elements such as compassion shown by Wonder Woman, or Batman’s ability to foresee someone’s contributes are cornerstones of the DC Universe. However, the ending is still somewhat rushed in an effort for a feel-good conclusion. The members of the league are almost too willing to step aside, and not get involved in Atlantis problems. However, it does provide a solid narrative for why you can assume they will not show up in Aquaman.

This issue implies that Mera will be taking on a larger role in the DC Universe. As a fan of the fierce red head, it’s a possibility that I hope isn’t ignored or laid aside by other writers. In the meantime, if you are a fan of seeing how a strong character can problem solve their way through taking on the Justice League, this issue is for you.

Gorgeous and consistent artistic detail, and attention to each league’s strengths, merged with Mera’s emotional journey and search for support create a dynamic issue. It will make you want to find other comics fans to debate, in the most fun way possible.