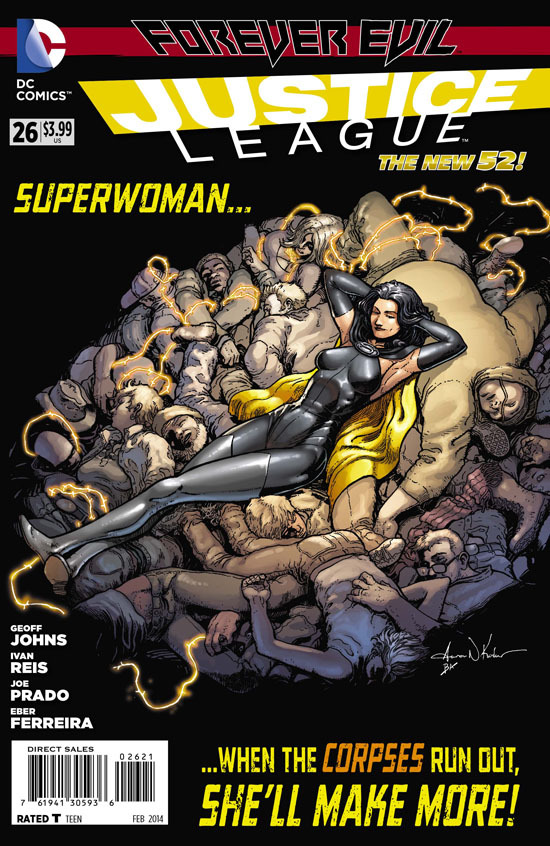 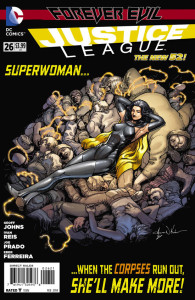 As Cyborg struggles to hold onto life in the wake of the Grid’s devastating separation from his body, that evolving entity is growing powerful in all the ways that matter — except for one. Still lacking the ability to feel just about anything, the Grid reviews his own beginnings, as well as the origins of Power Ring, Johnny Quick, Atomica, and Deathstorm. But what of the mysterious Superwoman? And just who is that hooded man?

Geoff Johns has been pulling double duty the last few months, chronicling the activities of the Crime Syndicate from two sides — in the pages of Forever Evil and here in the title bearing their Prime Earth counterparts’ name. While the former is obviously the big event book of the season for DC, the real meat of the story is happening right here. Having already established the origins of the Outsider, Ultraman and Owlman in the three previous issues, Johns now catches us up to speed on most of the remainder of the team. None of these origins are particular surprises in aggregate. Power Ring is still Hal Jordan, but a weak-willed man, beholden to fear, overtaken by Abin Sur’s legacy. Deathstorm is Professor Martin Stein, combined with the corpse of a young, brown-haired man who may or may not be Ronnie Raymond. Johnny and Rhonda are rogues amidst a Central City populated by cops with familiar names like Snart and Rory.

But the devil here is, not ironically, in the details. The tiny, subtle seeds Johns plants in each character’s origin open up an entirely new world to explore, both literally and in the sense of personalities and motivations. The mystery behind the destruction of Earth 3 is still top of mind, but the story of how the planet reached that point — how the Syndicate drew some phantom menace down on themselves — is a story I demand to see. And frankly, I wouldn’t be disappointed if we don’t get it here or in Forever Evil proper. Perhaps a Crime Syndicate or Earth 3 monthly could do the job. In any case, Johns does here what he often does best: establish vast mythologies from the tiniest nugget of inspiration and I can’t wait to see where it all leads.

Of course, partnering with artistic collaborator Ivan Reis and a team of incredible inkers gives Johns a brilliant platform upon which to unroll this grand vision. Reis captures the sheer terror in Power Ring’s origin, the sinister sociopathy of Johnny and Rhonda, and the Grid’s creepy emptiness with equal flair and expertise. The bookend scenes with Cyborg make me giddy in anticipation for that character to resurface, as Reis finds that perfect blend of humanity and abstract heroism in Victor that Johns describes, but we don’t always get in every appearance. Despite the multiple inkers, this issue does a fantastic job of holding together — partly due to the structure of multiple origins, and partly due to the high level of talent on the root pencils from Reis.

Another brilliant addition to the Forever Evil story that is consistently outshining all other tie-ins, not to mention the main book, Justice League #26 is proof that there’s a lot of gold to be mined in these characters and the world they left behind. Hopefully the aftermath of the event will give us the space and venue to explore just that.