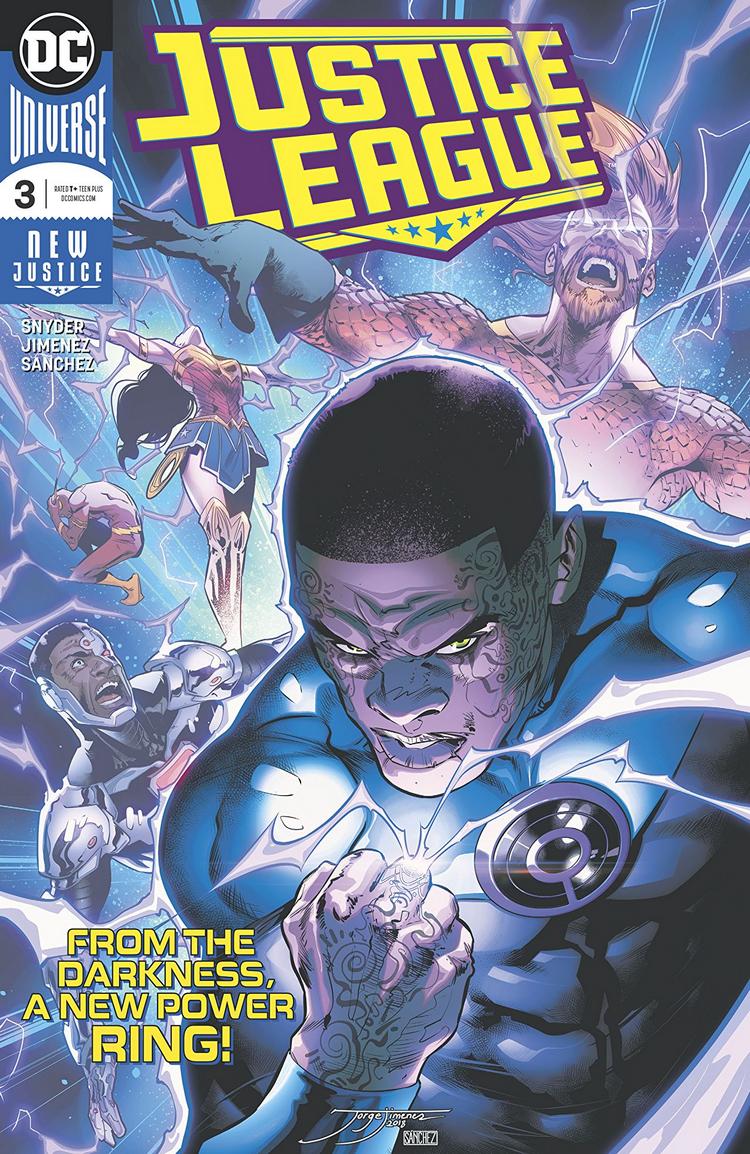 Everything you think you know is wrong.

That’s the lesson Snyder and the creative team with him are saying with the latest chapter in the opening arc of Justice League as hidden concepts and forces beyond our heroes and villains wildest dreams are unearthed and the League is stretched far and wide to combat threats that are changing the universe as they know it.

Snyder calls on different moments in character’s histories to add wrinkles to the new concepts and ideas he’s been presenting over the last two issues. Opening with Sinestro, at a time before the green light took over his life, we discover that a secret history with the future conqueror of the Yellow Lantern Corps and the ramifications that the past can have on your present left unchecked. The narration that charts Sinestro’s opener explains that history is meant to be kept in the past and well protected. Jimenez plots out an explorative Sinestro across the page and his design gives more meaning to his initial outfit that we’ve come to know before his ring slinging days. The coloring by Sanchez is beautiful with the lighting and shadows of the cliffs reflect on an around Sinestro. The narration continues that this moment in time is that of grave importance but has to be buried because he was destined for another path, unfortunately for him, the past has a way of showing up at un-opportune times and John Stewart is witnessing this first hand.

Jimenez and Sanchez let loose with the newly minted Ultraviolet Lantern. The colors from Sanchez turn dark and ultraviolet as Stewart and his new outlook take hold and a fight ensues that gives an explanation to this new source of power and emotion. The smaller details with John’s new outfit and emotion help show where the differences are coming from. For starters, he appears to be ringless and is more insignia based with a marking appearing where the ring would be and markings around his face. The ultraviolet aspects go into the colors and fight as Sanchez and Jimenez draw a fine line distinction between John and his ghostly constructs and the normal colored Wonder Woman, Flash, and Aquaman. The three heroes retain their bright and own color schemes with the backgrounds and surrounding area enveloped in destruction and constructs out to kill them in their undefined, liquid-like form. The action is quick and easy as Jimenez with ease shows how the new emotion works when it comes to battle. The narration from Snyder keeps pace with the action and tells us exactly what we need to know for this new emotion and the relationship it has on each League member that does battle with it. It’s only with some added assistance that the threat of the Ultraviolet Lantern is diffused but that’s hardly the only issue for our Heroes, as the unknown nature of The Totality allows for Snyder and company to have battles on a micro and macro scale!

Snyder gives each subset of Justice League members a unique challenge to conquer with their own unique hang-ups in place. With Superman and Martian Manhunter it’s fighting evolution itself in the lifeforms that The Totality has corrupted in the zone they’re wandering in. With Batman and Hawkgirl it’s a fight for the safety of Superman and Martian Manhunter as the effects of the zone are fighting to change them from the inside out. Jimenez’s versatility with pencils is in perfect form with the battle inside and outside. Capturing the close quarter’s ship battles of two bodies and the same mutated threat attempting to drown them out with the colors alternating based on which body the Hero is in and how much we see. Snyder doesn’t skimp when it comes to diving into the newfound forces at work in his run either. John gives us an expositional information dump concerning these unearthed forces and it’s on the cusp of more tantalizing ideas and concepts that the lettering from Napolitano always makes sure to bold when he isn’t providing bombastic blasts or providing different fonts for characters big and small.

Justice League continues to be THE DC title to read bi-weekly. These are cosmos shaking concepts being unearthed, character histories given a new light and added wrinkles to events long taken shape and remained. Jimenez and Sanchez absolutely stun and amaze on art duties with the scope of where they take the Justice League and the villains for that matter. Snyder is separating the League and always giving our cast something to do with locations new and old being visited and plenty of action to spare as ring slinging and colossal statues are just some of the things standing in the way of the Justice League. Jimenez’s pencils going from slick and precise to chaotic and monstrous firs every rotating plot that each division of the Justice League has to contend with and with Snyder’s narration and handle on the team dynamics…Justice League remains a top-notch book from a top-notch team.