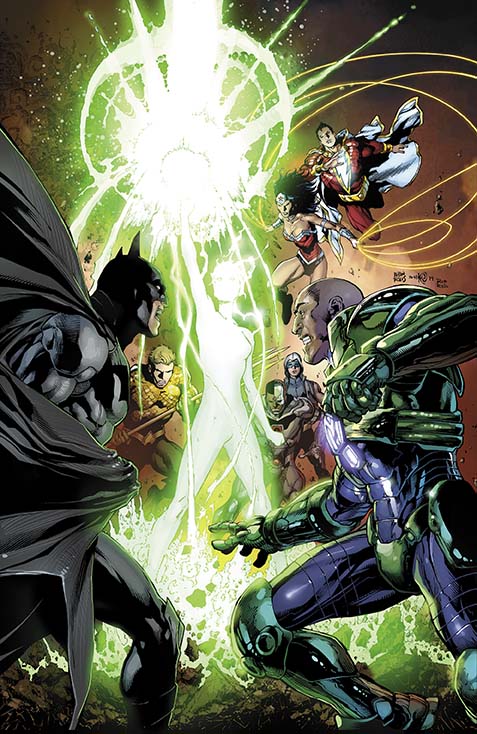 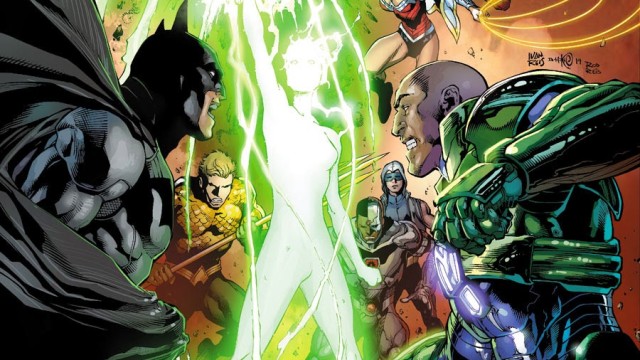 Damn, this Lex Luthor cat is fun to read.

Geoff Johns is on fire with Justice League. The post Forever Evil world has led to some interesting situations in the DCU, and Geoff Johns is using the changes he made in the event to take this series to a whole new level of entertaining. Lex Luthor is one of the most dynamic characters in comics and Johns is using him brilliantly to give this team and book a real shot in the arm. Luthor is by far and wide the star of this book, and Johns writes him so well that you can’t help but want more page time for him. This comic features an absolutely wonderful conversation between Lex and Bruce Wayne, an extremely tense back and forth between two of the most powerful characters in comics. Johns executes it perfectly, making me crave more time with Luthor and Batman going head to head.

Johns executes this entire issue well, balancing the intensity of the Luthor/Wayne fracas with some goofy and fun panels featuring Cyborg and Shazam. Readers are also given time with Jessica Cruz, the new Power Ring, who brings a large amount of danger to this issue. This new Justice League needs a powerful villain to take on and Cruz, controlled by the ring, seems to be a worthy foe. I would argue that Cruz’s origin may be darker than it needs to be, with an assault (possibly sexual) alluded to that has left her distrusting of the world. How Johns expands on this situation will ultimately define the success of this storyline, and if the darkness of her past is integral to her character and provides strength, or if it becomes overlooked and ultimately seen as disrespectful. For the moment, it appears to make her character complex, and readers will certainly be sympathetic to her situation as Power Ring.

Doug Mahnke is one of the best in the DC stable, and in this issue he shows why. His work is solid from start to finish, hitting the intensity out of the park during the interactions between some serious power players. His artwork drives home the tone of Johns’ script perfectly and it is obvious these two creators work well together. Mahnke delivers some poster-esque panels in this issue, showcasing the iconic nature of many of the characters in this comic. This is the big show, and Mahnke is more than up to the challenge of taking on the Justice League. His work is excellent, and you’d be hard pressed to find a better penciled issue of Justice League since the New 52 began.

Johns and Mahnke are a creative duo that highlight the best of what is coming from DC right now. Johns’ Justice League is stronger than it has ever been, and Mahnke is continuing the tradition of strong artwork that has been laid down by Ivan Reis. Luthor fans will be over the moon with this issue, and I would bet that most anyone who reads this comic will leave it a Luthor fan. Justice League is a must-read book right now, and I highly recommend issue #31.