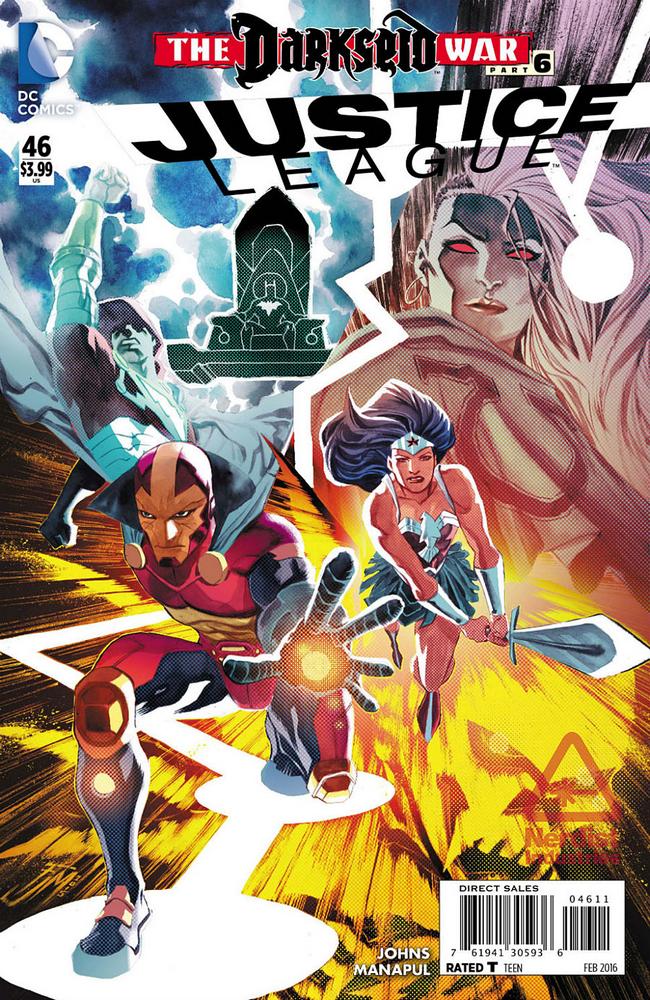 A fan favourite comes onto the scene with a boom as everything in the Darkseid War changes with the ascension of League members to Godhood.

After several one-shots showcasing what each of the “New Gods” is up to after acquiring their new power, Justice League is back and focused on the battlefield where Darkseid fell. Johns and Manapul bring readers back up to speed with some exposition before having the remaining members of the League go toe-to-toe with Darkseid’s elite in a satisfying brawl that gets a huge boost of energy in the middle by the appearance of a fan-favourite character. My personal history with this character isn’t all that extensive, but their appearance put a huge smile on my face and Johns wrote this character (and their banter with others) very well. Manapul ushers them in with a literal boom and some of his best pencil work in the entire issue, and it was a moment that certainly stuck out in an issue that felt like it was a calm before the storm.

The newly minted Gods have little to no impact in this particular issue, which surprised me considering how high-octane this event has been so far. This issue largely acts as a setup for the next act of the War, with the board being re-assembled and new cast members being drawn into this epic clash. This War is only going to get bigger, Johns assures readers of that, but it does feel clunky at points as the story transitions to the next phase. He still writes these characters well, especially where dialogue is concerned, and as far as transition/setup issues go, it’s still a solid comic.

Francis Manapul’s artwork is solid, though I have to concede that it does not match the “epic” tone set by Fabok’s work thus far. This is Manapul’s second issue in Darkseid War and it is a departure slightly even from his other work. He handles everything here, pencils, inks and colour work, so there is a definite cohesion in the artwork. There are moments where he captures the grand scale of this conflict very nicely, like the entrance of the character I mentioned earlier, but some of the quieter moments, with Diana in particular, are not the strongest. They aren’t poorly done, don’t get me wrong, but The Darkseid War, to this point, has been out of this world on the art front and points in this issue aren’t quite at that level.

Justice League #46 kicks off the next chapter The Darkseid War nicely and I’m definitely intrigued to see the fallout when this newly minted powder keg of a situation explodes. This is an epic conflict worthy of the flagship title that is Justice League and in Johns I trust.