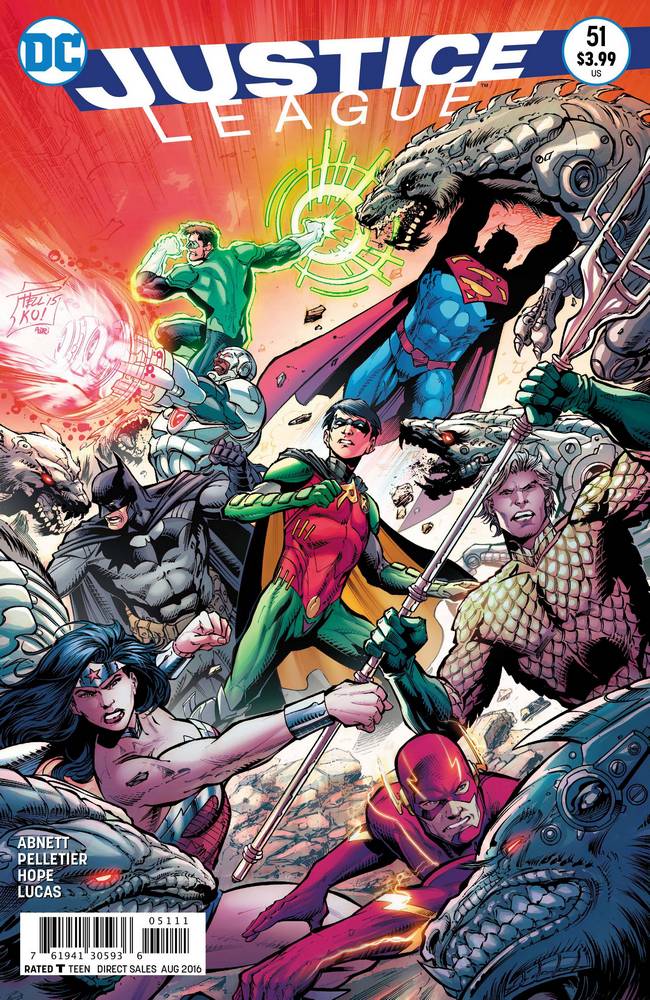 Anything following the conclusion of the “Darkseid War” and treading into the wake left behind DC Universe: Rebirth is going to have a difficult time measuring up. Especially when that story is contained in the pages of Justice League.

Unlike the first fiftyish issues of the series since the dawn of the New 52, however, Justice League #51 is not written by Geoff Johns. Dan Abnett, writer of Titans Hunt, as well as the Rebirth specials and upcoming series for both Aquaman and Titans steps in to deliver a tale from the files of the Justice League’s first year.

Beset by a series of Fortean phenomena with an apparent epicenter in Metropolis, the League welcome Robin to fight alongside them as they try to diffuse an ever-spiraling collection of seemingly unrelated issues. The challenges range from gargantuan metallic warhounds to a shaggy version of the Fearsome Five foe, Mammoth, (although the timeline of this tale predates the Fearsome Five) to a Coluan. Abnett puts just enough legitimacy into each threat to make the story hum along, but his true objective is to inform the readers of who the characters are and just how important Robin (in this case Dick Grayson) is to the future.

Abnett gives the story touches of levity, moments of anxiety, and a fair amount of action. He also shrouds Justice League #51 in mystery, as the adventure is observed and commented upon by a hungry individual with damp commentary in dripping maroon caption boxes provided by letterer Carlos M. Mangual. The mystery of the speaker lingers throughout the issue, and hangs over the tale, a gentleman’s promise to readers for an eventual payoff in the Rebirth days ahead. Abnett definitely has some ideas of his own and others entrusted to him for critical components of the DC Universe in the months ahead.

Always reliable penciller Paul Pelletier is quickly becoming the comic book equivalent of Mariano Rivera. Closing out titles, or contributing to the smooth finales for books like Justice League United, Titans Hunt, “The Final Days of Superman,” and now Justice League, Pelletier has been the artist on the spot for those assignments, and he has totally delivered each and every time. His style is instantly recognizable and he seems at home here drawing the Justice League. Sandra Hope inks Pelletier here, and she uses some interesting hatchwork throughout the issue. Hope’s line choices sometimes cast angular outlines, but other times deftly smoothes out edges. She preserves Pelletier’s work nicely, and the duo works well in the pages of Justice League #51. Colorist Adriano Lucas has plenty to do in this story, from the array of uniforms for this modern-day collection of Super Friends to the effects that accompany the League into battle. Lucas does a great job adding depth through subtle gradation and never shies away from saturating the pages with the colors of superpowered legends clashing.

From here, Pelletier will be moving on to Cyborg, surprisingly not to close that tile out, but to launch it into Rebirth. As he proves here, anything with Pelletier on art is going to be worth checking out. His collaborator for this issue, Abnett, will be on a different path, guiding the future of the Titans, Aquaman, and, hopefully, finding space to follow up on this tale. The tag at the end of Justice League #51 points readers to Titans: Rebirth, but that title doesn’t seem to be a direct result of this story as much as it stems from DC Universe: Rebirth.

Justice League #51 is itself a bit of an anomaly. It is very much a Justice League story, but the tale within is set in the earliest days of this League. This tells the tale of the League meeting the first Robin for the first time. It could almost be labeled Titans Hunt #0, Rebirth #0.5 or even Justice League #5.5. Even though some might be quick to dismiss Justice League #51, it is an enjoyable story with sharp art and recognizable characters. Pelletier draws a wonderful rendition of the League and Abnett balances the book and gives each reader’s favorite character a chance to shine while teasing readers towards upcoming adventures.