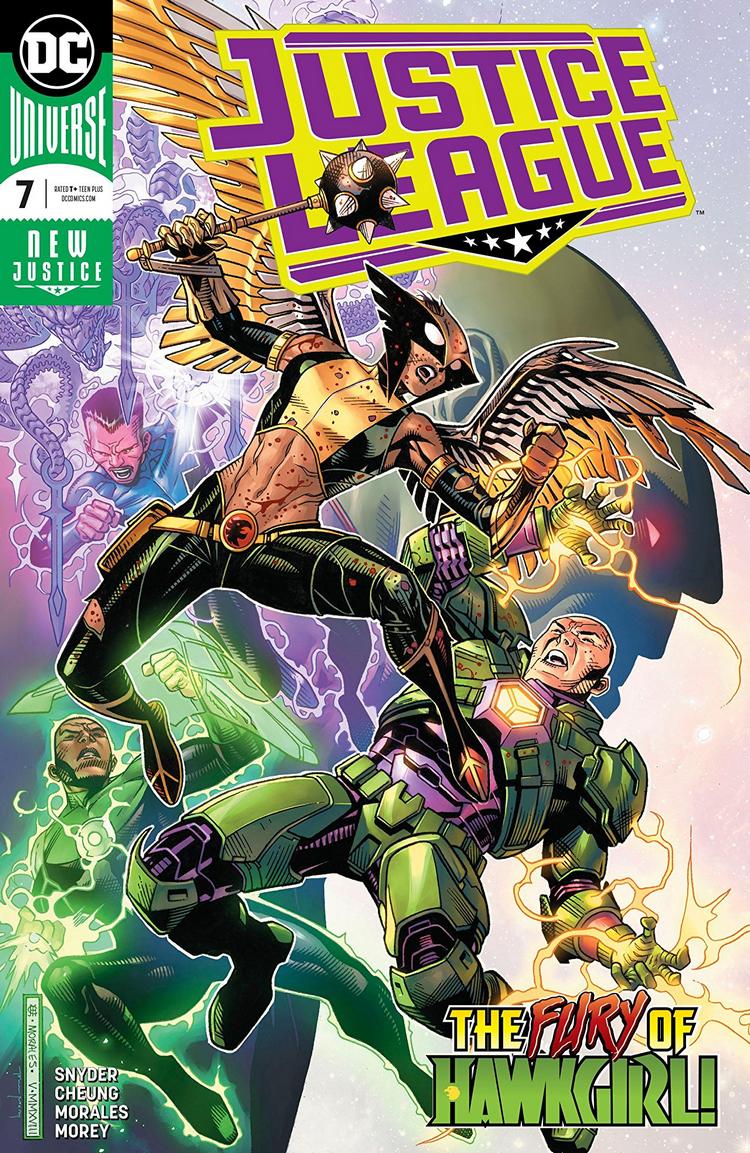 Beginning with a history lesson from the late Vandal Savage, Snyder illustrates his usage of known DC Mythology and his own additions as his narration of events past and present are viewed through Vandal’s eyes. The importance of the arc’s focal point, the Totality isn’t lost here. While Vandal Savage is no longer a player in the race to unlock its secrets, the page by Cheung falls in line with the emphasis that this run has put on the villains of the DC Universe. The bad guys and girls of DC aren’t neglected as Snyder moves characters across their own specific journey’s and character beats that slowly rise to the occasion over time. Throughout this run, the Justice League and Legion of Doom have been about being elevated or shifting gears. Shaking the dust off of characters and giving them new forces and ideas to ponder over has been the centered line throughout Snyder’s run and shows no signs of going anywhere.

Snyder’s big and bold adventure to the heart of the Totality has been in great hands with Jimenez filling out the meat of the run with Cheung bringing it to a close with large-scale pages of a climactic clash between Hawkgirl and Lex Luthor with the fate of the universe and beyond hanging in the balance. Cheung’s pencils go from up close and detailed to wider and smaller, encapsulating the characters as need be while retaining the same sense of detail and energy with blasts, sound effects, and the blazing trail of colors from Morales, Wong, and Morey light up the pages. Snyder spreads the time with his cast based around who has the most to prove for the arc in a balancing act that has the writing of each spotlighted character, in this case is Hawkgirl, John Stewart, Martian Manhunter, and The Flash each bringing something new to the table that is directly connected to the ongoing threat of Umbrax and/or The Totality. Cheung and the colorists, himself included do an amazing giving each character their own identity and time as the panels range from being divided across the three characters that are attempting to save the universe or honing in on one of their stories at a time. The colors from Morales. Wong and Morey allow for this book to catch the eye but follows the lines of each Hero and plot point that renders everything concerning John, Martian Manhunter, and Flash to be in their own distinct lane and retain the specific look and feel that’s been built over time and that includes the sound effects from Napolitano. Cheung’s pencils are solid and his Justice League look great with heavy inking around them with just enough space left for the colorwork to shine through as each and every member and their environment comes across differently along with each mission they have to come overcome.

Justice League under Snyder has been nothing short of an unconventional bombastic ride through the entire DC Universe with some of the biggest moments that make it the one DC title you need to read. Snyder has been slowly pushing these characters out of their comfort zones with his run and letting members of the League run wild with new ideas and concepts that are challenging for them and gives them new directions to seek. The Ultraviolet Corps and the Still Force are just two of the facets of the book that Snyder has introduced and explored that clicks into place as we race to the finale of the arc. Cheung spreads the action into smaller more intimate panels as everyone’s roles are made clear through Snyder’s narration and plot. It’s a grand undertaking he has here, changing the fabric of the multiverse and setting the Justice League on one of the biggest adventures thought possible with so many possibilities and wonders to eventually unlock. The aftermath of the first battle between Justice and Doom has a lot of surprises in store on both sides. Snyder leaves his team of Heroes with many new corners to explore, with some of his cast slowly changing due to the first arc. The DC Universe is becoming familiar and stranger with Justice League and with Snyder at the helm, it seems there’s a lot to tackle on a character to character basis for the near future.

With “The Totality” finally, at a close, the first arc of Justice League is a bonafide success with dynamic art and storytelling that is taking what’s great about the Justice League and Legion of Doom and giving them a whole new sandbox and surprise players to interact with. The number one Superhero Team packs everything you could ask for in this book and is just getting started. Snyder’s buildup and execution, always leaving something just out of arm’s reach in favor of always having something just around the corner bring on childlike anticipation as character’s talk about what comes next, and what comes next may be in this very issue!

The Justice League is in very good hands with this creative team on board.