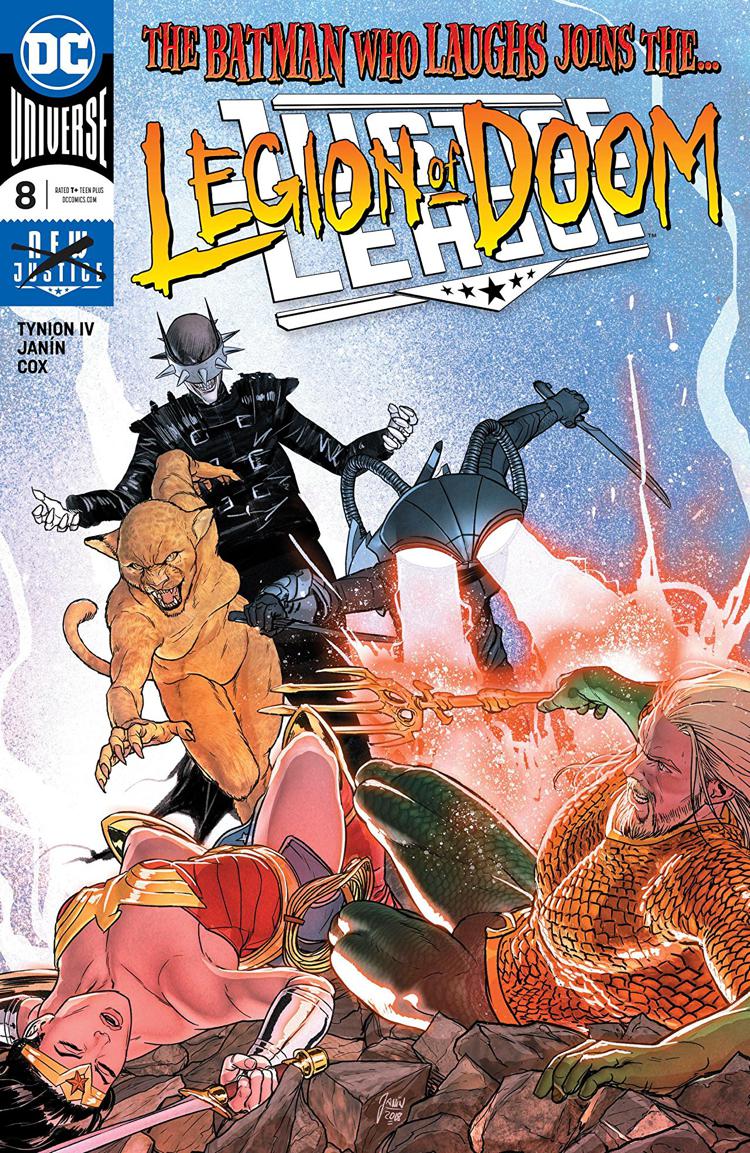 The Legion of Doom regains their spotlight in an issue that sets up more threads that stretch throughout the DC Universe past and present plus the reintroduction of a long-forgotten character that is primed to be a major player in the ongoing Totality battle. All of this and more wrapped in a creepy issue with the Legion of Doom and the emergence of a recent villain that could upend everything to get what he wants.

The next step for the Legion of Doom begins in the past and picks up on a plot point that concluded the previous issue with Starman making his arrival very well known to the Justice League. Keeping in line with the narration and format that has the title focus on a piece of DC Lore that relates to the present, we see the origin and relation to Starman’s reasoning for being involved in this Totality journey. Beginning in 1988, a science experiment went wrong and gave birth to a mighty Hero named Starman. Janin matches Tynion’s writing with each panel as the story of how Starman came to line up directly with the Totality itself. The panels mirror the story and have panels to break up the wide range of locations and action to focus up close on character’s faces in extreme moments. Janin captures the smug Lex as he makes his onto the scene and it’s where the book opens up with a colorful yet dark splash page. Cox’s colors on the opening splash are centered around the bright and bold Justice League being guided through nightmarish glimpses of what they know Lex’s plans. The colorful Justice League stand out here as the horrific nature of what Lex and the Legion are doing is in the limelight.

As the cover of the book can tell you, this is all about the villains and Tynion doesn’t disappoint in that regard. At the Hall of Doom a spread of Joker, Gorilla Grodd, and Sinestro chart some conversation between the big bads with Lex going through traps of his own design. Each area throughout the Hall with is labeled with a description and colors with only Lex and circular gates of different designs the only constant as the narration carries him through and to his destination. Janin and Cox together create some detailed locations and characters with the colors remaining bright but retaining the evil presence and feel on the page. Napolitano’s lettering gets accustomed to each villain and the Batman Who Laughs is an example of turning the mood of the comic on its head with this. The Batman Who Laughs is a character who does a lot with little to go on for the issue, being tied up with only his words about him, Tynion keeps him consistent as a Batman type far gone off the edge and with his own agenda. He’s drawn with a permanent Joker grin stuck to his face with the enclosed panels from Janin capturing the unsettling figure. Tynion keeps up his time on Detective with how The Batman Who Laughs comes across when he and Lex come to verbal blows. He’s a Batman, a Batman who has seen both sides of the Multiverse and in the Totality struggle, he’s a wealth of information for the Doom Team.

Meanwhile, the main plot and continued showcase of Cheetah and Black Manta’s partnership comes to blossom in a beautiful sequence of destruction and story progression into the next big Justice League story arc and it’s quite enticing how the two villains have fit into the story to become natural threats for their two respective foils. Manta and Cheetah light up the pages with their quick wits and savagery as they deliver a game-changing blow to a certain side of the DCU. Janin’s pencils are suited for both dialogue-heavy moments and action set pieces and Justice League is no different. Cox on colors ignite the pages wherever Janin needs them and the colors are never taking away from what’s happening on the pages, only adding to them. Tynion, like Snyder, continue the mysteries of what the Totality is and what it means for the Multiverse. This chapter is crucial for that ongoing plot as we’re getting more of an idea what this mysterious artifact is and just how far it reaches.

Justice League #8 aka another installment to the Legion of Doom’s side of the equation is an issue that pushes the book forward with its history, villains, and main story all contributing to the overall narrative of Justice League. Janin and Cox are an unorthodox pair for an issue depending on the big bads of the DC Universe but Janin’s pencils working in coordination with Tynion’s writing carries the actions and characters along quite well and Cox and Napolitano on colors and lettering respectively give each member of the Legion their own voice and style as plots both big and small either build to the forefront or are ready to crash down on the Justice League! The Legion of Doom Part Two handles itself greatly as another installment for the Legion and for the overraching narrative of the title.