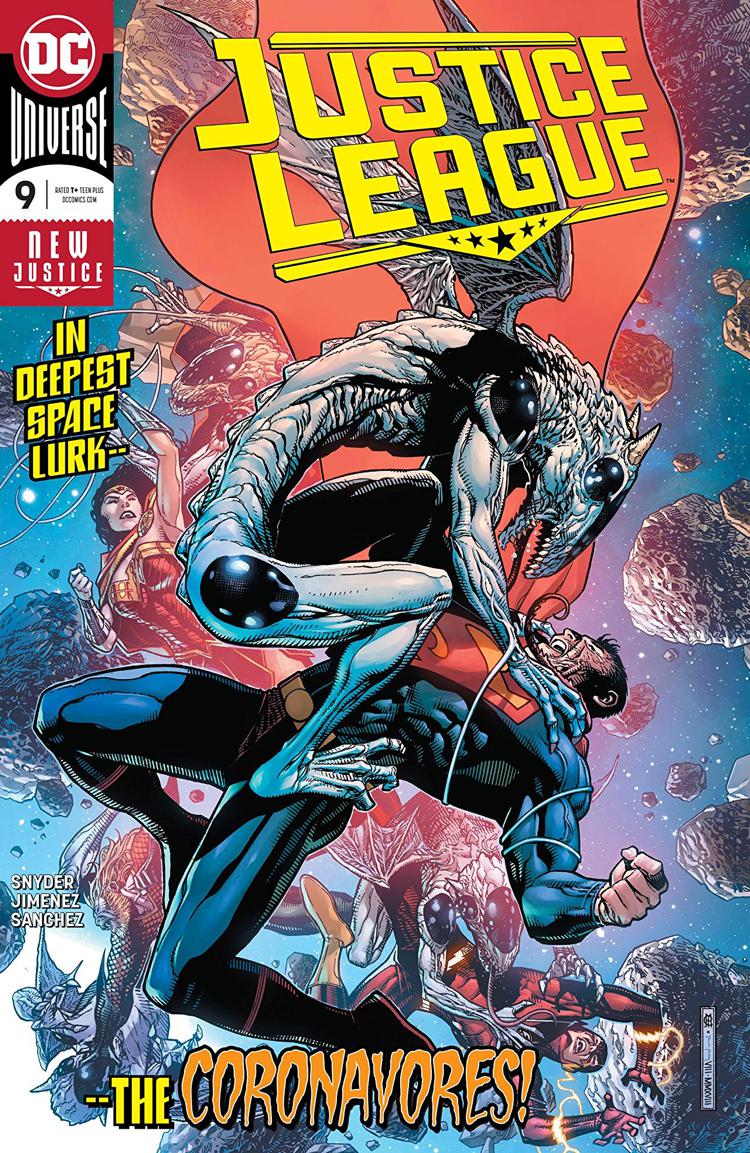 The quietest issue of Justice League so far provides a resting point at the Hall of Justice and it’s members who all have baggage, developments all their own, and Snyder gives us an issue that strengthens the bonds between the Leaguers and gives us a dazzling show that brightens the future above all else.

The issue begins with a nine-panel grid of a familiar object, the destroyed Moon from earlier in the run is being repaired by Superman. Jimenez with each panel increases the restoration of the moon with chunks coming into view with a red string zooming in between the pieces, connecting them. Superman is up the task of bringing back the moon and Snyder is writing a worrisome Batman to bounce off of a confident Superman as he does this seemingly simple task on the Moon. Jimenez draws the simple page of the moon being reconstructed with simplicity as it almost comes together with its white glow from Sanchez’s colors. The issue despite being a quiet affair for the League does have some action in the form of Superman having to combat a group of Coronavores on the moon. Jimenez pencils capture all of the angles of the quick fight between Superman and the aliens early on. The paneling is unique for the page that encapsulates the entire battle, with Superman being drawn smaller and close up to get different parts of the fight with Sanchez always having the perfect set of colors to not only have the location stand out amongst the characters but makes sure they’re identifiable also. You never lose sight of the Boy Scout in the action and the way Jimenez goes from smaller, looser panels of the action to more detailed, larger panels that still envoke the same level of detail across the board. Jimenez keeps getting better on Justice League, Sanchez’s colors bring the package together, and Napolitano’s letters give the individuality of characters an unsung light especially as Superman and Batman argue via their thoughts.

Throughout the issue, Snyder gets to have a good time with his cast in different ways. The Hall of Justice is open for civilians and it’s a joyous attraction and sight. Batman is still healing from his wounds and the mysteries of the Starman are also on the backburner. Instead, Snyder opts to catch up with the Hall of Justice and it’s Heroes who are all having issues and conversations in the Mess Hall. The branding of New Justice gave the Justice League titles a sense of uniformity. The Hall of Justice is an extension of that with its halls filled with DC Heroes new and old, some not seen in other titles are spread throughout the splash page of the Mess Hall with Jimenez packing a multitude of characters where ever he can squeeze them. The amount of detail on the big moment isn’t lost on Snyder, he gets some meaningful conversation between sets of Leaguers who all have a connection to each other in one way or another. In between eating food, John and Barry have a quick chat about the changing forces surrounding them and interesting developments are arising for more of the main team. Snyder is digging into different qualities of these characters and uses their connections to explore different areas of themselves and their connection to the larger DC Universe. Wonder Woman and Aquaman have the most interesting connections to explore, specifically in the confines of what Snyder has been doing with the title itself, but also in the grand scheme of things.

The Hall of Justice acts as a character itself in the issue with the world-building that he does with the building. He’s using the League’s different personalities and lifestyles shine in a section of the issue that shows that Snyder is adept at knowing these character’s and how their comic history, both old and new, shines through the different “Domains” they’ve built. Jimenez and Sanchez render the different areas for each specific Leaguer go hand-in-hand with Snyder’s writing of what makes each section strictly for that character. The writing feels earnest and exciting like the Hall and its characters have secrets and adventures just waiting to be explored, and they do! The conversations each set of Leaguers has in this title are reflected in the present or near future of Justice League or it’s sister titles. Snyder is making himself right at home at the center of the DC Universe with Justice League and the premier team.

This far into the run on Justice League, Snyder and his art team have steered a tightly wound ship that knows how to de-escalate the moments in between major story arcs to round out the overall story of The Totality and the ongoing battle between Justice vs. Doom. Even when most of the issue is composed of exotic locations and characters conversing, Jimenez and Sanchez make their respective fields look wonderful doing it. Even when the story is going through its downtime moment, Justice League maintains interest in the ongoing story while stopping to give the characters a chance to focus on the smaller things, fix damaged relationships, and get reminded that their bonds aren’t the weakness, but their strength.