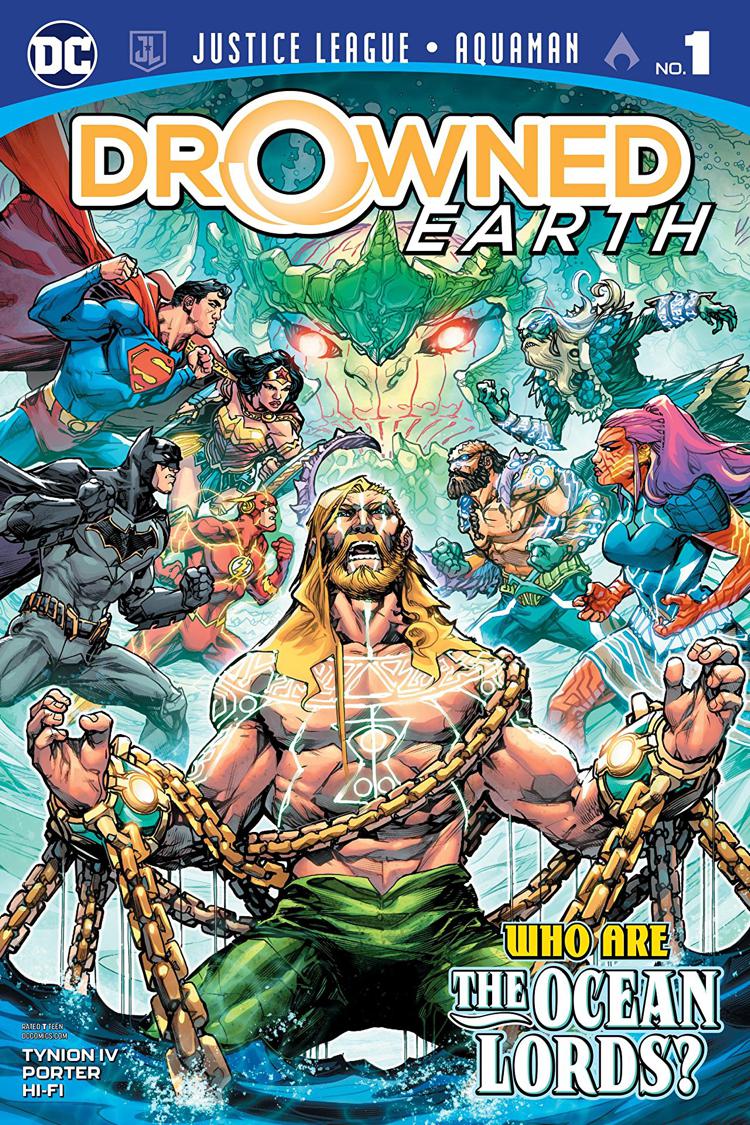 The Triumvirate of Ocean Lords – Fleet Admiral Tyyde, Captain Gall, and Commander Drogue – have neutralized Aquaman and unleashed The Flood. Readers picking this issue up cold might be a little baffled as to when that occurred, but this comic moves along at a fine clip, giving readers everything they need to get up to speed.

The results of the attack are a massive flood beyond Biblical proportions and hideous transformations the likes of which no one is immune to. The Justice League is spread thin – Green Lantern, Hawkgirl, and Martian Manhunter are in space, as is the Justice League Odyssey team anchored by Cyborg – and the water now covers more than the original three-quarters of the globe. Now, however, Tynion has seen to it that the water is filled with danger, from the Triumvirate and their sinister spawn to Black Manta and so much more.

The writer does a masterful job of collaboratively leading Porter to plumb the depths of imagination. Atlantis, Gotham City, the Blood Reef, Metropolis, the open oceans – all of these and more are backdrops for the calamity cascading through the DC Universe in the 38 pages of story present in Justice League/Aquaman Drowned Earth.

Incredible art by Howard Porter, who (in addition to drawing entire lines of merchandise-ready characters and settings) fills pages like no one else, with the notable exceptions of George Pérez and Phil Jimenez. Porter’s art is more animated though, swapping a level of detail for a layer of energy. Porter is clearly pushing into new territory, experimenting with story, layout, transitional devices, and frames, and having fun the whole time. The end result is a story so powerfully set within the entire DC Universe that readers will want to thumb back through Justice League/Aquaman Drowned Earth after they finish reading it, simply to scour Porter’s art for details and hidden treasure.

Hi-Fi’s colors work perfectly for the story, giving the water temperature and texture, layered on top of Porter’s art. Despite the oceanic settings of Justice League/Aquaman Drowned Earth, Hi-Fi still employs bold colors to keep the toyetic feeling burning brightly. Crayola might be tapping Hi-Fi on the shoulder soon, pointing to shades in this comic and asking, “What do you call that one?” Hi-Fi uses a broad range of shades and tones to indicate depth (seriously, I’m not trying to be punny!) throughout the story, magnifying Porter’s drawings to be even more study-worthy.

Porter is becoming a fundamental part of Justice League lore, having launched the Grant Morrison JLA as well as being integral to Justice League 3000. With his concepts brought to page here, his crisp storytelling, and his penchant for delivering jaw-dropping splash pages (no pun intended), Porter is providing a clinic on epic comic art.

Napolitano is able to work into and through the pages effectively, avoiding any unnecessary truncation of Porter’s art. There is almost as much dialog throughout Justice League/Aquaman Drowned Earth as there is action, and both are balanced nicely, leaning into each other. Napolitano’s dialog erupts when necessary and even fades to restrained dialog in an effective manner, giving the letters of this comic as much value as the art or colors.

I have no doubt things will work out just fine in the end, but before the end of the story gets here, Tynion, Porter, Hi-Fi, and Napolitano have a gripping tale to share that is seemingly filled with the unexpected. In the course of the adventure, we’re seeing things like Metropolis flooded, Black Manta claiming power he has no right to, and Mera fighting for the salvation of the entire planet.

Justice League/Aquaman Drowned Earth is a fun page-turner. Porter’s art makes this comic feel bigger than it is, which is saying quite a bit given that it is nearly double the length of a standard single issue. It never drags, though, as Tynion finds ways to shift things up, to change settings, and move spotlights, that keeps this tale clicking along.