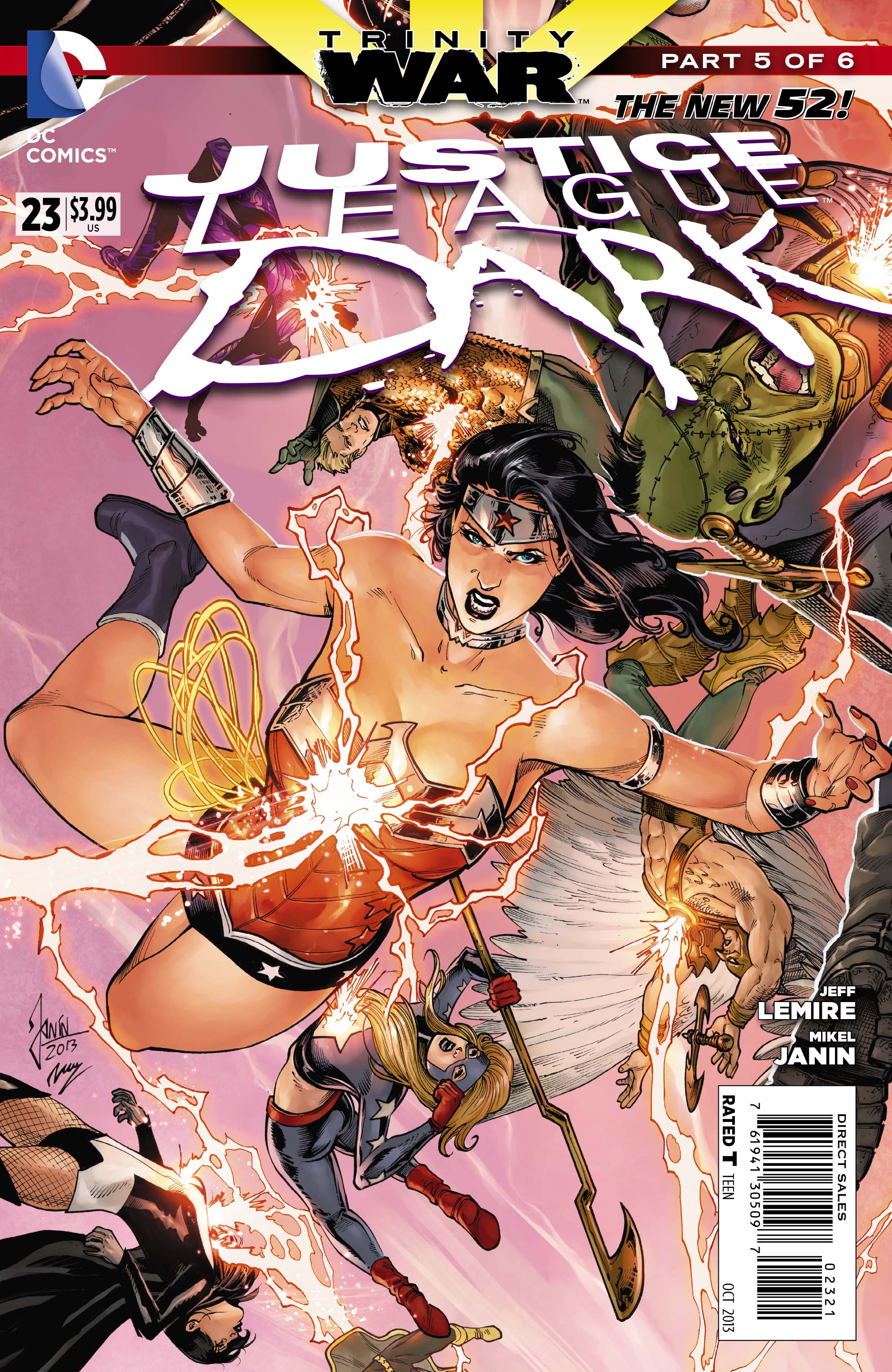 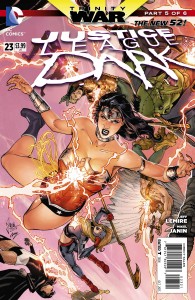 The moment alluded to a year and a half ago in DC Comics’ The New 52 Free Comic Book Day edition has finally come to pass. Members of the Justice Leagues are at war with each other and the reason comes down to one little box. But, in the end, what is the secret behind Pandora’s box? The answers lie within!

Lemire punches the action way up for this penultimate issue of Trinity War, giving fans of hero vs. hero drama pretty much everything they could want. Seeing Frankenstein go toe to stitched-on toe with Wonder Woman, Zatanna casting spells right and left, and Shazam pretty much wiping the floor with everybody who tries to go up against him are all well-conceived moments — quick, but powerful. These characters in particular take central focus in this issue, and its no wonder. Wonder Woman and Shazam in particular could feel right at home in a darker version of the Justice League, and one wonders whether that is indeed what we are being set up for, a little mix and match post-Forever Evil. We do get a clear explanation as to why it seemed like Black Adam was appearing in that long ago drawn New 52 fold-out, and Shazam’s presence, more than anyone’s, dominates the issue. Finally, we get to see the world’s mightiest mortal interacting with his newfound peers and it’s both curious and impressive. Perhaps because Superman is off to the wayside, I have no problem discerning who the top powerhouse is in this issue, and it’s definitely not the Last Son of Krypton. Kudos to all the gents for finally getting Shazam front and center to the DC Universe and having him feel like he fits right in. It’s about time.

Janin once again delivers an absolutely magnificent issue, proving that his expertise in tights and fights is just as significant as his delivery of the usual gloom and doom Justice League Dark provides (and I mean that in the most endearing way possible). Rather than have every hero weighted down by the otherwise mystical nature of the story, Janin delivers strong, powerful representations of each Justice Leaguer, with his Shazam standing particularly above the rest. The page layouts are kept very frenetic, moving the action swiftly through the issue without losing one ounce of perfect detail to each character’s costuming or facial expressions. Jeromy Cox too delivers exceptional colors to the entire issue, illuminating Zatanna’s magic in gold and scarlet highlights against the pale greens and darker shadows. Costumes pop against their surroundings, but even so-called normal characters like Amanda Waller and John Constantine still seem to fit in. It all just works to create a gorgeous representation of these larger than life heroes who have to shine like a beacon amid the darkness.

One more issue to go in DC Comics’ prelude to their first big event of the New 52, and there’s no question it’s been a wild ride. With Jeff Lemire stepping off Justice League Dark now, it’s perhaps an excellent time to thank him for delivering, month after month, the perfect blend of super-heroics and dark magical drama — honestly, a feat we haven’t seen performed as well to date almost anywhere. Ending his run here, with a literal mélange of DC mythology racing across the page, could have become a mish-mosh, but instead is a true testament to his skill and dedication to the book itself.