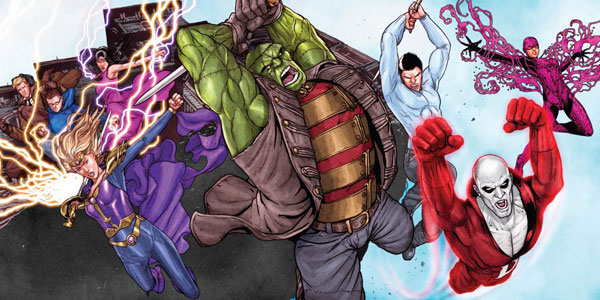 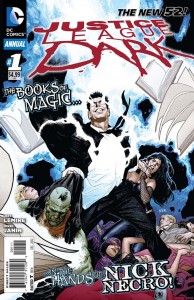 When darkness fell and the world was once again at risk, the world’s greatest super-heroes answered the call! Zatanna! John Constantine! Deadman! The Black Orchid! Madame Xanadu! Frankenstein, Agent of S.H.A.D.E.! Amethyst, Princess of Gemwold! Timothy Hunter! I, Vampire! Doctor Mist! The Justice League Dark is now assembled and ready to save the Books of Magic from all those who seek to gain their power for evil purposes!

If the above description seems a bit cheeky or old school, you’ll have to forgive me. This first annual for what is steadily becoming, in my opinion, the best Justice League team in the DC Universe, just reminds me so much of comics from when I was a kid. The first annual I ever purchased, in fact, was for Justice League of America, and it made an impression on me. Like that original annual, Justice League Dark Annual #1 features the heroes working separately, only to come together in the end to defeat their foe, not just using brawn, but moreover brains, particularly that of their newfound leader John Constantine. Despite the rather unorthodox role call above, the team actually functions much like any super-hero team would — something I didn’t think would work back in September 2011 and I now can’t imagine how it had never come about sooner. Don’t let the Dark moniker fool you. These are not brooding figures in darkened corners barely able to lay eyes on each other. There is a surprising amount of straight-up, old-fashioned heroism here, even in Constantine despite his best efforts to the contrary. And it doesn’t feel weird at all.

Lemire has done an outstanding job since taking over the title six months ago at the start of “War for the Books of Magic,” a storyline that ends in this very issue. That said, if you haven’t been following along, the writer does an excellent job of giving full background and context for what has come before and setting up a whopper of a next story. His characterizations of each hero feel realistic and believable, from Zatanna’s nobility under pressure and the Black Orchid’s sarcasm, to Hunter’s youthful trepidation. While there are a lot of heroes, villains, history and context at play here, Lemire manages to make it all work seamlessly when a lesser writer could have simply made a mess. And just when it seems like the story is ready to wrap up, a brand new wrinkle is introduced — one that looks suspiciously godly, if not magical, and has me on the edge of my seat for the next issue.

Janin, the artistic mainstay for the title since issue #1, continues to deliver some of the best super-hero art on the comic stands today. With members of the League divided between those in plainclothes and those in traditional heroic garb, Janin somehow manages to make them all look at ease with each other on the page and no single character standing out as ridiculous. His depiction of Black Orchid’s shapeshifting abilities is one of my favorite moments of any Justice League Dark issue, but that may now be challenged by Janin’s illustration of new cast member Frankenstein. As an avid fan of Frank’s now departing monthly title, I’m blown away by the regality and massive presence he’s given the monster here. And while Janin’s most detailed moments definitely center on character, there’s no shortage of intricate line work devoted to environment, without overwhelming the reader with too much to absorb on every page. Without question, DC Comics has found its perfect team in Lemire and Janin. Here’s hoping for a long run for what is actually shaping up to be the World’s Greatest Super-Heroes after all.