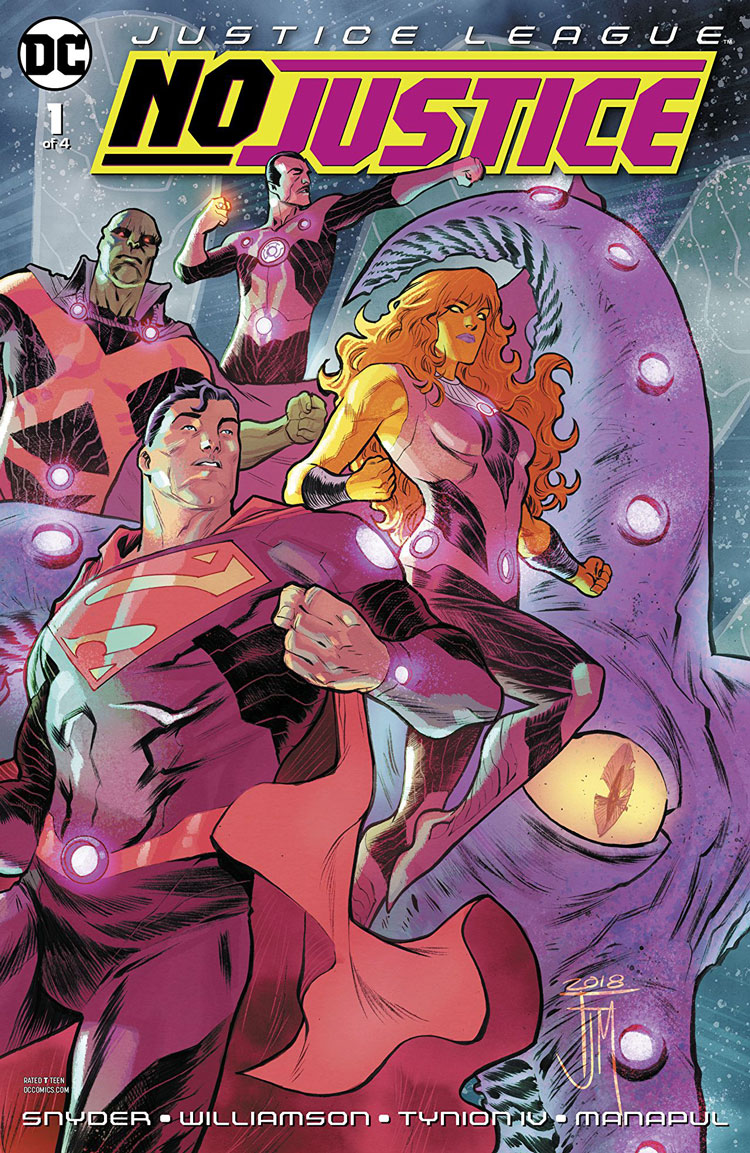 Brainiac takes down all of Earth’s superheroes… then asks for their help saving his home planet Colu from an even greater galactic threat.

Justice League: No Justice #1 is the follow-up to Dark Nights: Metal, the event that’s been rocking the DC Universe for the past year, and leads into a new status quo for the Justice League. Even if its purpose is to serve as a bridge connecting one event to the next, though, it feels epic and fulfilling in its own right. It’s a widescreen spectacular bringing together the entire universe, much in the vein of Crisis on Infinite Earths, and represents the best of the massive superhero crossover genre.

The issue opens with Brainiac invading Earth and defeating the Titans, the Teen Titans, the Suicide Squad, and the Justice League simultaneously, then abducting them to his spaceship to explain his higher purpose. With the Source Wall, the barrier at the edge of the universe, breached as a result of events in Dark Nights: Metal, four Omega Titans representing fundamental forces of the universe have arrived to feast.

The set-up, admittedly, is fairly standard big superhero event fare. A lot of super-heroes are brought together to collectively punch a big threat to the universe. In this case, the threat is so big that villains must be brought in to begrudgingly unite against a common foe, a conceit previously seen in, for example, the aforementioned Crisis on Infinite Earths.

Brainiac’s reorganization of the heroes and villains into somewhat unusual strike teams is a bit distinct, but also not unheard of. Even the threat being faced feels like Galactus, relocated from the Marvel Universe, serial numbers filed off, then multiplied by four.

What makes No Justice great, at least in this first outing, is the care and craft that went into it. The writing is brisk, the action is epic, the story has relentless forward momentum even when digressing into exposition. Every page that can be a double-page spread is one, and Manapul’s artistry shines through in these large-scale, full-cast action set pieces. Every page is a feast and panel layouts are dynamic and engaging.

On top of this, there’s a twist in the final few pages that suggests the story is jumping the tracks and going in a somewhat different direction than one might expect, leaving the reader uncertain where, specifically, the story is going in the next issues even as there’s a general sense of where the story will end up.

It’s easy to get exhausted and cynical about these big super-hero event comics. Even the description of No Justice, an event that connects another event to a new status quo, is aggravating. Nonetheless, No Justice, like Metal before it, represents the absolute best of what these massive crossovers have to offer, something that only superhero comics (and, as recent movies have shown, the Marvel Cinematic Universe) can do. It’s a chance to watch characters we’ve come to love come together, interact with one another, and punch bad guys on an epic scale.

It takes itself seriously enough that we’re willing to go along with it and accept it on its own terms, but not so seriously that we’re expected to treat it as more meaningful than what it is. It doesn’t pretend to be making an important statement that will change our lives or how we think about the world, but nor does it feel like a rote exercise in shaking up the status quo simply for the purpose of getting us to buy into whatever the next thing is.

Justice League: No Justice #1 is the best there is at what it does, delivering epic, large-scale widescreen super-hero action in beautiful style. How much you enjoy it is entirely dependent on whether there’s at least part of you that still thinks that what it does can be very nice.