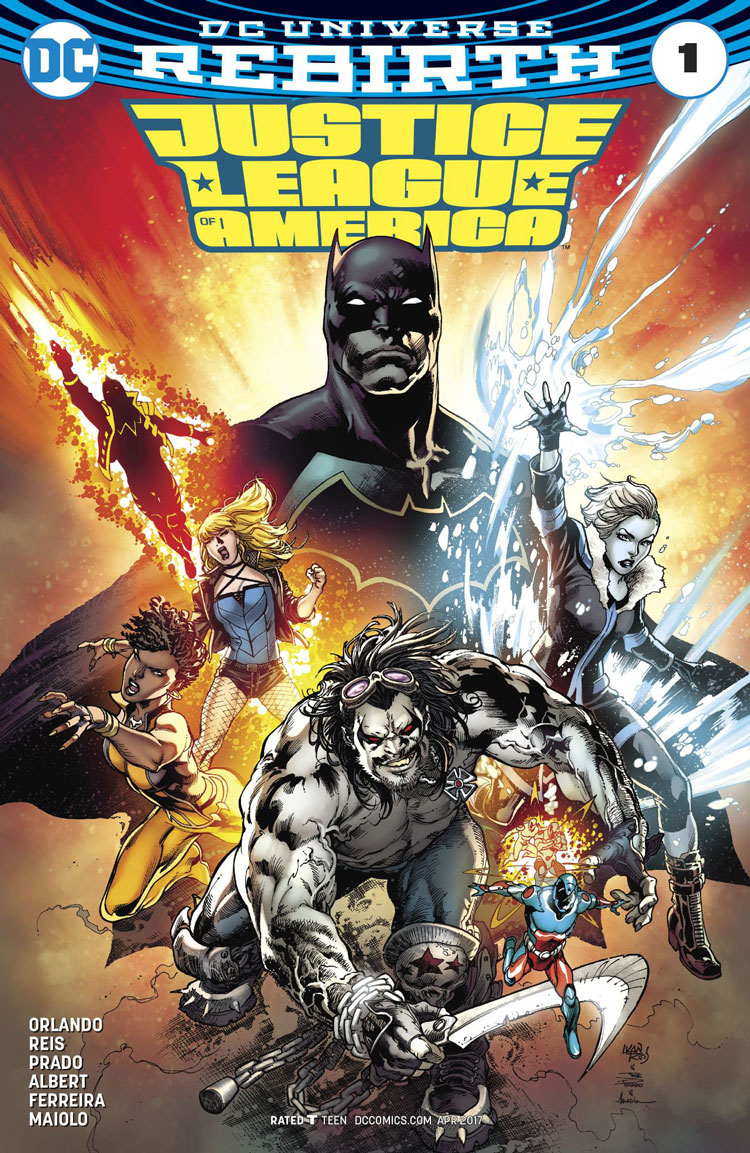 Bruce and Vixen talk about keeping the team together, while Ray works with Dinah to quell a fire, Lobo traverses the sea with lava monsters in tow, and Caitlin begins to show Ryan the depth of her intelligence. Once their alert system is up and running, they find themselves traveling headlong into a battle with interdimensional villains, putting this new team to the test right away.

I’m still getting used to this team make-up, largely because it actually works, to my surprise. Any ranks that Lobo is among are sure to crumble, yet his abrasive nature is held in check by Dinah’s confrontation, Vixen’s level-headed personality, and Bruce’s capacity for leadership.

Justice League of America is quickly showing weaknesses and strengths in a way that creates an awesome synthesis needed for a team like this. Ray and Ryan are curious and questioning, but they have important abilities that can help the team thrive. Bruce himself is not so much the domineering Bat, but the strategist who knows when and what to say and do.

The women of JLA are easily my favorite characters, but the ones I also feel will carry the story. Vixen definitely stands out because even though she’s conflicted about being a hero and standing with this crew, but she obviously has the chops to be one of the JLA’s most steadfast members. Steve Orlando writes her as though she’s capable, which I realized was something I haven’t seen from her save for a few stories.

Dinah takes her role as a hero to heart, and there are obvious signs she will end up being a mentor to the likes of Ray and Ryan. Caitlin knows that the world may not be ready for her stint as a superhero, but she is assertive and vital in a well-rounded manner of ways.

Seeing these characters as part of a team is wonderful in itself, but the interactions they hold, especially with the men around them, can hopefully create a status quo of the team that centers around their efforts, abilities, and contributions, not the other way around.

Ryan and Ray’s role on the team is apparent in this first issue, too. The two rookies are insecure about their powers and how to do this job right. Yet, they aren’t simply bumbling obstacles within the story or to their team.

There are a couple of moments that put their insecurities at the fore, but this is also tempered by their willingness to try regardless. Ryan worries that Bruce didn’t really want him there, but he takes a brave risk that is right in line with his character and expertise. Ray openly questions, but is still able to use his abilities the best way he knows how. Putting them among seasoned superhero vets will be a great chance to see them grow as heroes and into their own sort of confidence.

Orlando’s handling of the team speaks to a sensitivity and understanding of how to build group dynamics. They don’t all have to be hot-heads or apprehensive rookies, and each of their personalities can emerge without taking over anyone else’s. This team work is what helps make the story shine and I think will be one of its biggest strengths.

Ivan Reis draws incredibly dramatic characters and scenery. The placing of bodies against their background makes them all feel powerful. Reis’ use of differing perspectives, and a couple of stellar double-page spreads, gives the first issue of JLA an important presence. Each of the inkers, Joe Prado, Oclair Albert, and Julio Ferreira, contribute to the massive destruction and action with inks that feel sufficiently dense. This series isn’t big on the touchy-feely stuff, and the inkers help that with grungy depth and effects on each page.

Marcelo Maiolo adds a different kind of dimension, utilizing dark colors to capture the more serious tone and events of the story. The only scenes that are truly bright are those that involve explosions or the manifestations of power and energy, creating a nice effect as the rest of the issue feels much more morose. Each layer of the art invokes a JLA that is moving through the darkness of humanity to show the world its and their potential.

It’s been a long time since I encountered a Justice League-anything that I wanted to continually read. JLA #1 puts us right in the action and gives us a glimpse of each of the characters and how they come together. The characterization and plot are on point, aided by visuals that truly astound. I love where this story is going and I like that it feels fresh, a departure from a lot of the team stuff we’ve seen in the past few years. Check this out if you want to see a band of characters from all walks of life that don’t easily succumb to their differences, but instead do what they can in the moment while displaying their humanity.