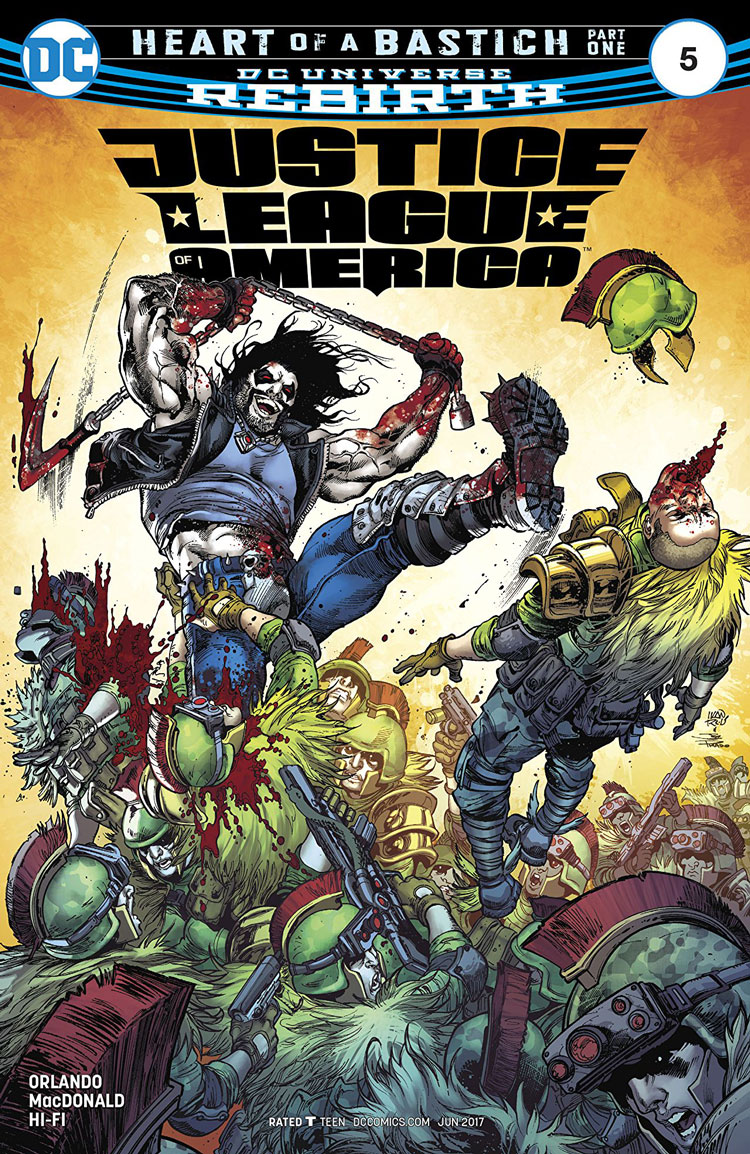 In the aftermath of their first public adventure, the Justice League of America opens the doors of the Secret Sanctuary — now dubbed Mount Justice — to the public, declaring EVERYONE, powered or not, to be a member with access. But the press conference stirs up a new dilemma: the takeover of a Pennsylvania town by an ancient villain. Sounds like just the right kind of mission for the JLA.

I know it sounds like a backhanded compliment, but Steve Orlando really is a fanboy’s fanboy. We saw it, in particular, in Midnighter and Apollo, as dozens of obscure DCU figures and objects flooded the pages in a grand cacophony of madness, making the book not just satisfying to long time readers, but also introducing new readers to ideas they can either take at face value or dig deeper to explore.

It’s a tight balance when relying so heavily on historical material to fill out the details in your story, but Orlando has an uncanny ability to make it all seem fresh and unique in the way Morrison and Porter’s JLA did the same. That book still holds up today as if it were recently published, and there’s a reason for that. Unlike some of Morrison’s more recent creator-owned property, JLA had a reverence for each and every item that graced its panels. Like a masterful accumulation positioned just so by a most respectful curator, those pieces of DCU miscellany never felt like a barrier — only a gateway.

Much the same, Orlando’s heavy use of such divergent artifacts — ranging from 1980s Wonder Woman villain Nikos Aegeus and WGBS reporter Olivia Ortega from Batman to the Whisper Gang introduced to Gotham City as recently as Scott Snyder and Greg Capullo’s first arc on Batman — all shine as if they were manifesting for the very first time in these pages. And it’s their intertwining with this new sort of status quo and modern messaging that also helps that along.

Make no mistake. This is a very different Justice League of America from what Morrison envisioned in the late 1990s, gods who hovered above mankind ready to offer fire if needed to the people below. In fact, Orlando’s model feels much more like its antecedent can be found in a League well before his time — the Justice League Detroit. But while those heroes took a local approach (rarely looking past their neighborhood) the JLA here believes in the global community of neighbors. It’s an interesting evolution, certainly one reflecting the times, and once again leaves this collection of team members and their adversaries feeling fresh and relevant.

Andy MacDonald’s somewhat quirky line work differentiates this mission a bit from that other Justice League’s, giving the issue a more home grown, grassroots vibrancy. It also feels particularly appropriate given the extended focus on Lobo’s movements throughout the issue, as he hacks and tears his way through crowds of mythological warriors just to deliver a package (and then end up scorching through the sky after being shot with a folklore weapon of Nikos Aegeus’s design).

The only trouble is, while inside the panels, MacDonald succeeds in finding that right level of detail and scope, he drops the ball in transitions. I can’t be sure where the Atom comes from in confronting Aegeus. We don’t ever see the weapon actually fired at Lobo that sends him flailing (and unable to heal). And the overall effect makes for choppiness in the read for me. And I imagine the collected edition, working back and forth between artists, rather than concentrated in shorter arcs, as in Batman, is going to only enhance that feeling.

Justice League of America is a beautiful concept for a League we very much need in 2017, and carries with it a cast that has the beginnings of looking very much like America itself. And for all of its relevancy, Orlando and MacDonald manage to pack in Easter eggs and important references without making the book feel isolating at all. The only hurdle for this team’s ultimate success? Artistic consistency. If we can see that even out, there will be no stopping it.