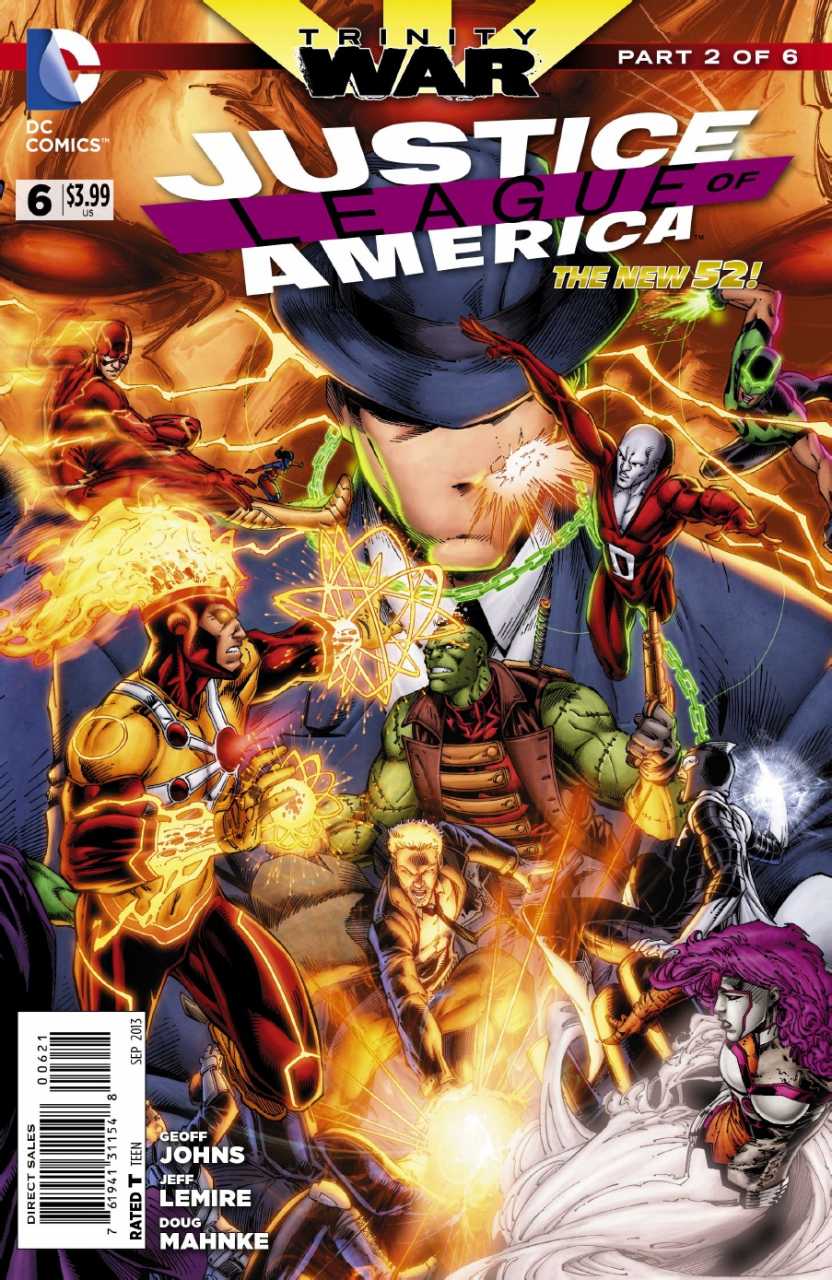 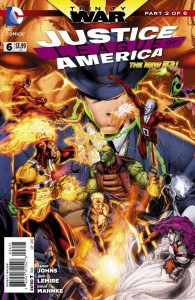 “Trinity War” continues, as part two of the crossover event rocking the various Leagues lands squarely in the lap of Amanda Waller and Steve Trevor. Superman has seemingly committed the ultimate crime, but there seems to be much more mystery behind his actions than the public will likely ever know. As Batman and Wonder Woman pursue different courses of action to prove their ally’s innocence, another key player arrives on the scene. Enter: the third member of the Trinity of Sin, the Question!

Geoff Johns and Jeff Lemire do a fair job of continuing the momentum from part one in Justice League #22, but recognize early on the ridiculousness of staging a prolonged brawl between these two teams. Despite what many pundits assumed about the storyline, “Trinity War” is clearly not six issues of heroes pounding on each other, as the mystery behind their current situation takes over as the primary narrative. In some sense, this is a much quieter issue, with much less detail and the multiple narration now gone. But it also echoes some of what I always loved about Silver Age team-ups between the Justice League and the Justice Society, with little vignettes happening between characters before the main action could proceed. Each one is given a little bit of a moment for the most part, and some, like the brief interchange between Simon Baz and Oliver Queen, lead me to imagine relationships that have great potential down the road to flourish. Giving Diana most of the spotlight this issue, Johns and Lemire capture her tension with former beau Trevor effectively enough, but ultimately she seems the one character that’s a bit “off” throughout. Perhaps it’s meant to be a reflection of her new relationship with the Man of Steel or the result of an encounter last issue with one of her own kind, but how she proceeds to interrogate one particular guest star doesn’t seem to fit with her usual calm, self-assured demeanor. Nevertheless, it leads to a fairly organic reason to bring in the third team and lead into the next chapter in Justice League Dark #22, so perhaps it’s a detail not worth perseverating over.

Mahnke, who joins Johns on the title full time moving forward, is pretty much the perfect choice to illustrate not just any crowd of super-heroes, but particularly ones who trade on the edgier side of the street. No stranger to the Justice League, Mahnke served with the team during Joe Kelley’s run on the title in the early 2000s, and subsequently illustrated the spin-off title Justice League Elite — themselves a more mercenary version of the world’s greatest super-heroes. His pencils traditionally give figures and faces a sharper edge, and that style is not wasted on this title. Mahnke delivers an Aquaman and Hawkman who live up to the barbarian traditions they’re meant to represent, a Waller whose soft features still remain cold and calculated, and an Amazon whose eyes are deeply expressive of her demeanor. The art throughout is a tad inconsistent, with no less than four inkers credited, but Mahnke managed to hold it all together throughout with only the odd gesture here or there punctuated by a lighter inking hand. However, the double page spread he executes — with the reader feeling as though he’s in the thick of the action — is pretty much worth the price of admission itself.

All in all, Justice League of America #6 is a solid breather in the wake of a jam-packed introductory chapter. While the issue may not offer too many more conclusive answers to questions already posed, it firmly establishes that this crossover is first and foremost a mystery story, and not simply the next super-hero brawl event of the year — much to my delight.