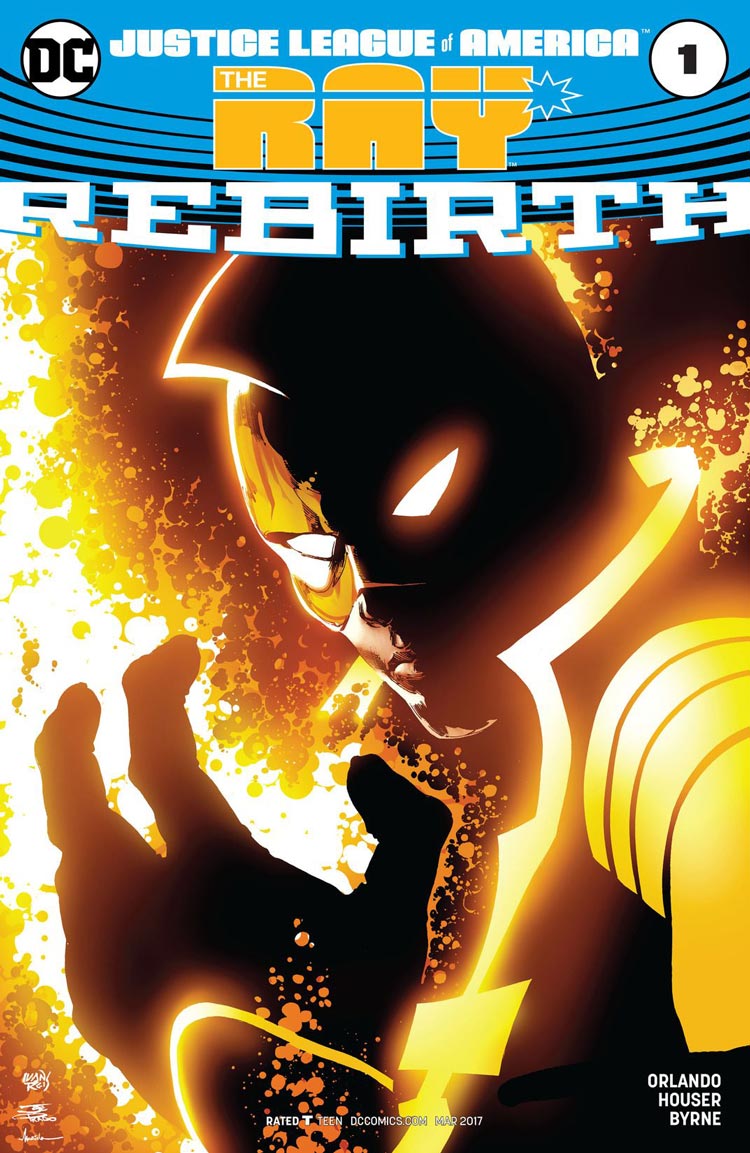 Ray Terrill was kept in a dark room his entire life, told that he was different and it was too dangerous for him to be out in the world. A skin disease, his mother said, and at least one accident that drove his best friend in the hospital, maybe even into the grave. But now, Ray has had enough hiding, and is ready to experience the world, even if he has to do it under a cloak of invisibility. That is, until circumstances call for him to step up as the hero he was always meant to be.

I read The Ray series years and years ago, around 1992, just as I was coming to quiet grips with my attraction to other men. I was just 17 when the mini-series arrived from co-creators Jack C. Harris and Joe Quesada (and editor Christopher Priest), and it would be yet be a few years before I came out fully to my family and friends.

It resonated, for reasons I probably didn’t even fully process. Here was a kid kept more or less in a dark closet, shut away from the world and the truth of himself by his mother. He had a cool haircut, a sweet jacket, and was bursting with energy the second he could expose himself to the world.

If that wasn’t intended to be a coming out story for young gay men, then those comic creators stumbled their way into the perfect metaphor with the biggest set of shades on I could imagine.

Flash forward 25 years and we get an all-queer creative team handling Ray’s story with the queerness that was perhaps there all along re-ignited, revealed, and laid bare onto the page. Writer Steve Orlando and artist Stephen Byrne have made the metaphor literal with the Ray’s coming out both as a hero and as a gay man with one notable difference: Ray Terrill isn’t at odds with his sexuality. Even before leaving the dark, he is clear about who and what he is in terms of his homosexuality — although clearly not in regard to his future as a hero.

That comes fast and furious with his own sense of safe exploration — mimicking the half-closeted approach that many young queer men in less secure atmospheres find themselves pursuing — via traveling while literally invisible. It’s such a powerful moment when Byrne takes Ray from his ghostly form to a darkened figure full of crackling energy. With just a few words via Orlando — “It was time to step out into the light.” — we get the full energy and excitement of that coming out moment in all its bravado and anger and sense of self-acceptance.

And what’s more telling about the goals Orlando and Byrne had for the story as a whole — and for Ray as a main character — is that he is universally accepted upon his arrival. He reunites with his childhood friend, blind in one eye from their accident, but gay himself. We see Ray go out on a date — NOT with the first gay man he encounters in the story. And we see him fly away determined to be the hero the city of Vanity and the world need.

In essence, he has the happy ending to his coming out story and his sexuality is both integral to the story, but not enshrined in its tragedy. He’s not laid out on the table as a cadaver of adolescent queerness for straight audiences to observe and pick at. He’s unapologetic about his sexuality, but doesn’t suffer its consequences from a mainstream, heterosexist culture of control and punishment.

How do they express themes of otherness differently than just reinforcing the oppression the majority perpetrates? How do you write so that you’re subverting that oppression and leaving room for the characters to be both gay, for instance, and many many other things at once?

The Ray, in that regard, truly is an opportunity for rebirth, and exactly the kind of story — among many many others of queer people telling their own stories — that all creators and fans need to pay attention to. No story is going to fit everyone’s truth. The goal, of course, is to hit on a specific truth that can at least resonate genuineness, and not wallow in the point of view of the majority over that of the other. Orlando and Byrne have accomplished that, and developed a story that centers hope and brightness to the queer experience — something those of us living and loving in that community needed to see.