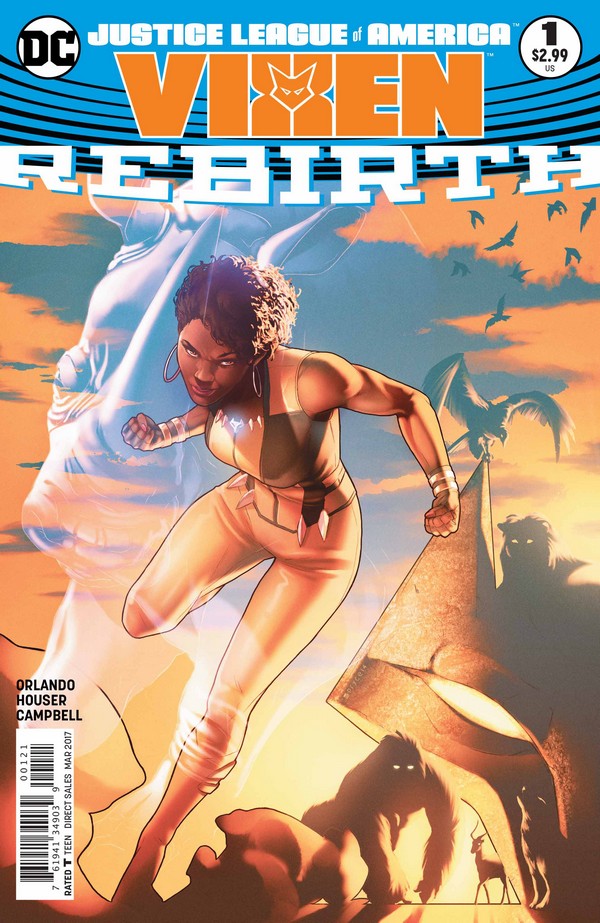 I’ve been a Vixen fan since I first met her in the 1984 Justice League of America Annual #2. It wasn’t until a few years later that I’d learned of her imploded solo title from the 1970s, nor did I know of her earlier appearance in DC Comics Presents, but I knew I liked her: her independence, her confidence, and especially her powers – using the mystical Tantu Totem she could call on any animal’s abilities. And at the tender age of twelve, for a kid who wanted to be a zookeeper, this was the ultimate power trip.

That alone was enough to fuel imagination and fandom for me. I found echoes of my own appreciation in Justice League of America: Vixen Rebirth #1, written by Steve Orlando and Jody Houser, with art from Jamal Campbell and letters by Clayton Cowles (making a rare lettering appearance on the DC side of the new comics rack).

Straightforward, but with stunning visuals, of the same cloth as the Vixen: Return of the Lion series from 2008, Justice League of America: Vixen Rebirth #1 is a welcoming comic filled with open invitations to imagination. Campbell colors his own work, which is filled with diversity and distinction. Mari is a super model in the story and Campbell makes her the same in his art, but he doesn’t tart her up. His Mari is sexy and suave, bold in her choices and confident in every single step. Even her pivots moments of self doubt and personal examination are strong – she dominates the scene, not vice versa.

In the colors, Campbell blends the concept of the Red – the living web that connects all life in the animal kingdom – with the notion of Tantu Totem-summoned avatars that have traditionally been anything from blue to purple to a blend of both. The result is a picture that would require this review to be a thousand words longer. Here’s just a sliver.

Campbell doesn’t just draw a gorgeous star in Justice League of America: Vixen Rebirth #1. He crafts masterful storytelling, the type of which could be addictive to a child learning how to read, as the visuals in this comic book tell you everything you need to know. Campbell keeps the story clean, favoring sharp, rectangular panels with white gutters in between. When the story calls for flashback, he scales back the palette, limiting the hues present, but leaving them saturated. Cowles follows suit, with classic white caption boxes identifying locale and timing, word balloons that respond to intonation, and smooth, masterful flow for the lettering paced by story beats.

On the surface, Justice League of America: Vixen Rebirth #1 looks to be a spoiled rich redemption story, not unlike the plot of the first Iron Man movie, except a young girl with a missing mother replaces Ho Yinsen. This is the impetus Mari needs to accept her destiny, to answer the call, to become Vixen. And it works beautifully. Orlando and Houser take it much deeper than that, however, giving Mari feelings, letting the reader into those feelings, and establishing the drive that powers Vixen. They also take the time to populate the roster of influence that shaped Mari as both Mari and Vixen, from her first days receiving the Tantu Totem to her present day publicity staff and agent. We don’t see Mari’s agent Gary, but Houser and Orlando define him strongly enough that he won’t be a complete stranger once he’s introduced.

While reading this, I was not completely sure how Justice League of America: Vixen Rebirth #1 matches up with Vixen’s New 52 or pre-New 52 existence, but our own interview with Steve Orlando makes it all quite clear: “All of her appearances happened.” Phew. Regardless if you’re a longtime fan of Mari Jiwe McCabe or a newbie who happens to remember her from the Justice League Unlimited cartoon from over a decade ago, or discovered the character in her more recent CW Network adventures, Justice League of America: Vixen Rebirth #1 is a nice, succinct introduction. It sums up the character nicely without falling down any rabbit holes and even folds in the possibilities introduced in the Legends of Tomorrow show. Most importantly, it sets Vixen up for a whole new world of adventure. Intentional or not, Orlando and Houser have made Vixen the JLA parallel to Iron Man in the Marvel Cinematic Universe. She’s the high profile member of the group and looks ready to blend celebrity with cause, power with profile. And it’s about damn time.