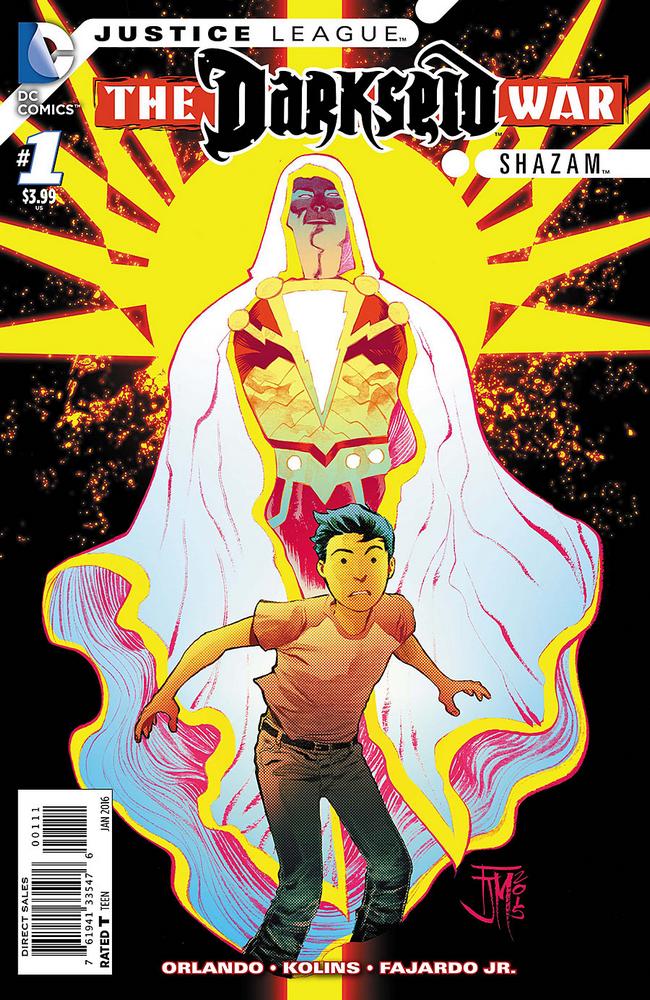 In the aftermath of Darkseid’s death, Shazam’s tether to his gods is broken! But where the old gods held sway, now come the New Gods! S’Ivaa! H’Ronmeer! Anapel! Zonuz! Ate! Mamaragan! And Billy Batson is about to teach them ALL a lesson.

Shazam is such a weird character. Don’t get me wrong. I love the potential in a boy that becomes a man with just a magic word uttered, but we rarely see that potential played out in any interesting way. Either the boy is completely subsumed to the man (who is usually pretty dull, frankly) or he’s so idealized himself that the transformation doesn’t contrast enough with what was there before. It’s not just about adding muscles, you know. This isn’t Charles Atlas. It’s frigging Shazam.

Steve Orlando (like Geoff Johns before him) gets the need to make Billy Batson the guy, not Shazam. And while his World’s Mightiest Mortal still feels like less of an intellectual transformation (although in this case, we get the ring-true snark of adolescence, not any gee-whiz personality traits), we get that strong contrast in the physical versus the emotional. His Shazam is not a god. Far from it. And therein lies the fascination I have with his take in the latest Darkseid War special.

To date, these one-shot stories have not lived up to the main story in Justice League by any stretch of the imagination, ranging from seemingly pointless to downright eyebrow-raising. But in Shazam we are given a story that explores a little bit of what it means to have cracked open godhood in the DC Universe and not just — as with other stories — what it means to be corrupted by it. Orlando’s Billy Batson is exactly the same kid he’s been these last few years: a little jerky, definitely impetuous, smart as a whip, but still a hero through and through. And these New Gods that make up his pantheon certainly got more than they bargained for when they signed up.

It’s cool to see Orlando doing a deep dive into DC history and mythology in general to construct Shazam’s new acronym, drawing only one very obscure goddess from the Greek (i.e. Western) pantheon. Bringing in Siberian and Aboriginal, as well as post-Kirby New God and Martian, deities is a fair bit more interesting than what I expected: a pantheon of Kirby New Gods, some of whom don’t have much to offer in the way of prowess. Steppenwulf is one thing. Even Himon has great wisdom. But get down to Avia, Mantis, and Amazing Grace and you’re scraping the barrel.

What makes this one-shot more than anything else, though, is the magnificent pencil and inkwork by Scott Kolins and the stunning color work by Romulo Fajardo, Jr. I have not seen work so strong from Kolins ever, as the artist gives us a square jaw version of Shazam with perfect clarity of line, detailing every other character with just as much love and care.

The framing sequence Kolins gives the story taking place inside the Source is distinctive and reminiscent in a way of Kirby without being a direct reference in any way. There’s definitely a sense of novelty to both the scenes and these new iterations of the Shazam power, and the details are just incredible to digest slowly with every page turn. It’s not enough that Shazam looks INCREDIBLE in his New God-accented suit, but Billy looks nearly as powerful from his own sense of self as the adult hero does post-transformation.

A fun special that feels more like a beginning of something fascinating than a simple flash-in-the-pan, Justice League: The Darkseid War: Shazam is the kind of story I’ve been hoping to see for so long from DC Comics on a monthly basis for one of their oldest and greatest characters. Steve Orlando and Scott Kolins nailed it, and if I had my druthers, they’d be chronicling Billy Batson and the New Gods of his pantheon month in and month out, ad infinitum.