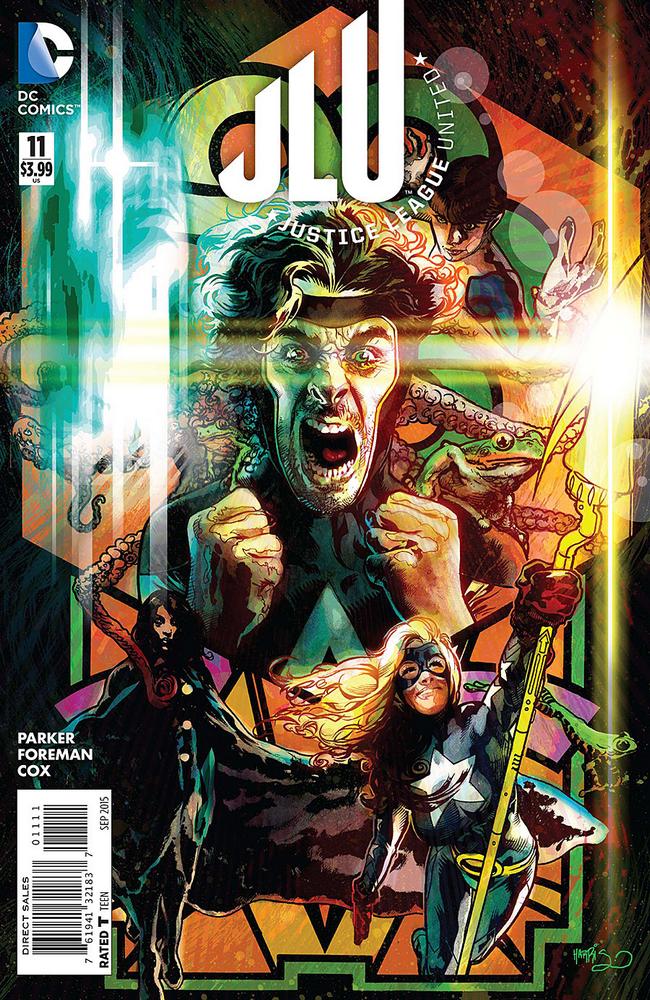 The JLU has a new creative team and a new direction as Jeff Parker and Travel Foreman assemble an additional crew of very well known characters to round out the team in JLU #11.

I have to kick off this review by talking about Travel Foreman’s artwork. I wasn’t entirely sure what to expect here, as Foreman’s work has been hit or miss for me in the past. I think he was very well suited for what he did on Animal Man, but his time on Birds of Prey just didn’t work for me. How he’d handle this crew of Justice Leaguers, well….I just didn’t know. Thankfully, I think he put forward some really solid work here, utilizing his strengths just like in Animal Man to unleash some visuals that are raw and powerful and gross all at once. Some of his work is extremely detailed and polished, which makes the raw work hit that much harder and there are some trippy sequences with Poison Ivy and a certain Avatar of the Green that are very well rendered. High action sequences are where his work really shines and this is some of the best work I’ve seen from Foreman in awhile.

Jeff Parker works with Travel’s strengths, giving him a lot to work with in this issue. While some of the comic is getting this new band together, Parker’s writing allows for situations where Foreman can still cut loose even though introductions are happening. Parker manages to get a lot of his signature humour in there as well, and I think he has a really good handle on the “original” JLU members. Adam Strange’s role is very intriguing and this “Justice League assembled for specific threats” angle could be a lot of fun. There is more spark in this comic than there has been since the first issue and Parker’s writing gives these characters a lot of life and energy.

Justice League United #11 is definitely worth a look for anyone who strayed from the book despite liking some of the characters. Parker and Foreman have an intriguing concept here and this first issue is executed well. This comic features some great characters who are well written and Travel Foreman’s artwork has some serious pop at points. I’m definitely in to see where this book goes and JLU is back on my radar.