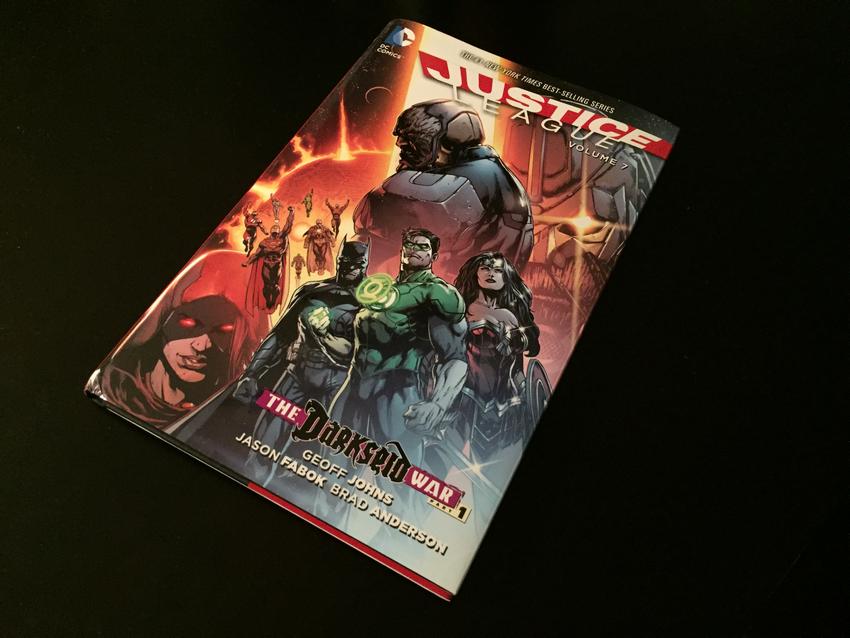 ***SPOILER WARNING – This review won’t spoil everything, but some very minor spoilers may appear below***

I’ll say this straight off the top: this is as big as superhero comics get.

When Geoff Johns is on, I’d argue there is no one better writing in DC’s lineup. Geoff Johns is on with The Darkseid War. He’s on like Sinestro Corps War on, and by golly, do readers get to reap the benefit of how killer a story this is.

Johns is going for broke with this arc of Justice League, and I absolutely love that this is an arc of a single title. Forever Evil was plagued by the scope of how many titles it drew in and the titles on the periphery were took away from the main story. That is not the case with The Darkseid War and this collection is a testament to how cohesive a story this is and how containing it to a single title can be a great thing. You don’t need to worry about any other collections or tie-ins or anything else to understand the full scope of The Darkseid War. The first act is all here, in this one collection and that is just a win. The collection includes Justice League #40-44 and DC Comics Divergence #1, an all-star-artist-filled issue that provides a great set up for this epic clash. The mayhem begins with Justice League #40 and then I start to lose words for how awesome this event is.

Geoff Johns has all the heavy hitters in play in this collection, with all the big Justice League members, some powerful new Amazons, Darkseid and his lieutenants and Mister Miracle. While I will admit that I am not completely versed in the continuity surrounding Miracle, Apokolips and the Amazons, I am fully capable of recognizing kickass characters when I see them, and Johns has filled every single page of this collection with them. New or old, these characters are powerhouses and Johns does not ever falter with a single line of dialogue they utter. His work with Wonder Woman, Mister Miracle and Metron impressed me the most, though there really is not a single character he does not excel at writing. From the outset he sets the table with massive stakes and he does not let up until the final page of this collection. This first arc of The Darkseid War is massive, there is no other word for it. Titans fall, Gods rise, mayhem ensues. This is as big as it gets. 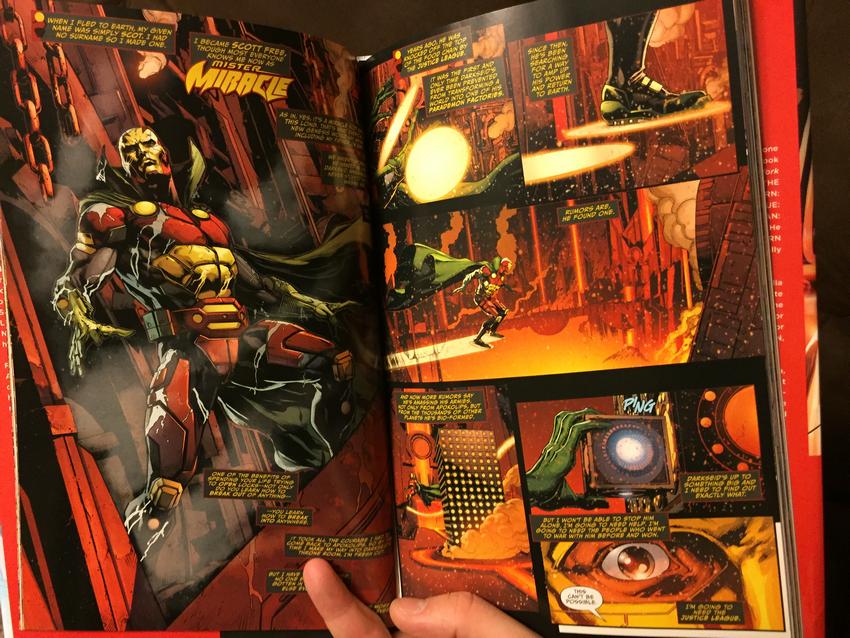 Above, in the art credits, is a laundry list of powerhouse artists. Maguire, Ordway, Jimenez, Lee, Williams and Kolins work on the Divergence issue, which is really a jam session explaining how The Darkseid War is plausible. When they step aside and unleash the beast that is Jason Fabok loose, the glory starts to happen. Jason Fabok is one of the best artists working in superhero comics today and he shows why he is an A-lister with his work in this collection. I’m not sure I’ve seen better artwork since the debut of the New 52 than what Fabok delivers in this collection and he is as gifted a storyteller as Geoff Johns is. He handles a massive cast, massive events and the massive stakes of this event brilliantly and I cannot praise his work highly enough. My only complaint lies with Grail’s costume design, as I feel her character’s power is diminished by her impractical costume, but I believe that criticism falls into a larger discussion about costume design for female characters and may have been out of Fabok’s control for the sake of this story.

With respect to format, this is a typical hardcover that DC releases for a volume. The paper quality is great, the printing has no issues and it’s exactly what you’d expect from a hardcover debut for a collection. This story will be getting a more complete, deluxe treatment in the future, which will serve the story well as this is just the first act, but it is so damn good I really can’t complain about the cliffhanger they leave this volume on.

Justice League Volume 7: Darkseid War Part 1 is one of the best collections I have read in a long time. This is DC’s best comic right now and if you strayed from Johns’ Justice League at some point since the New 52 began, now’s the time to get back into the game. You won’t be disappointed.