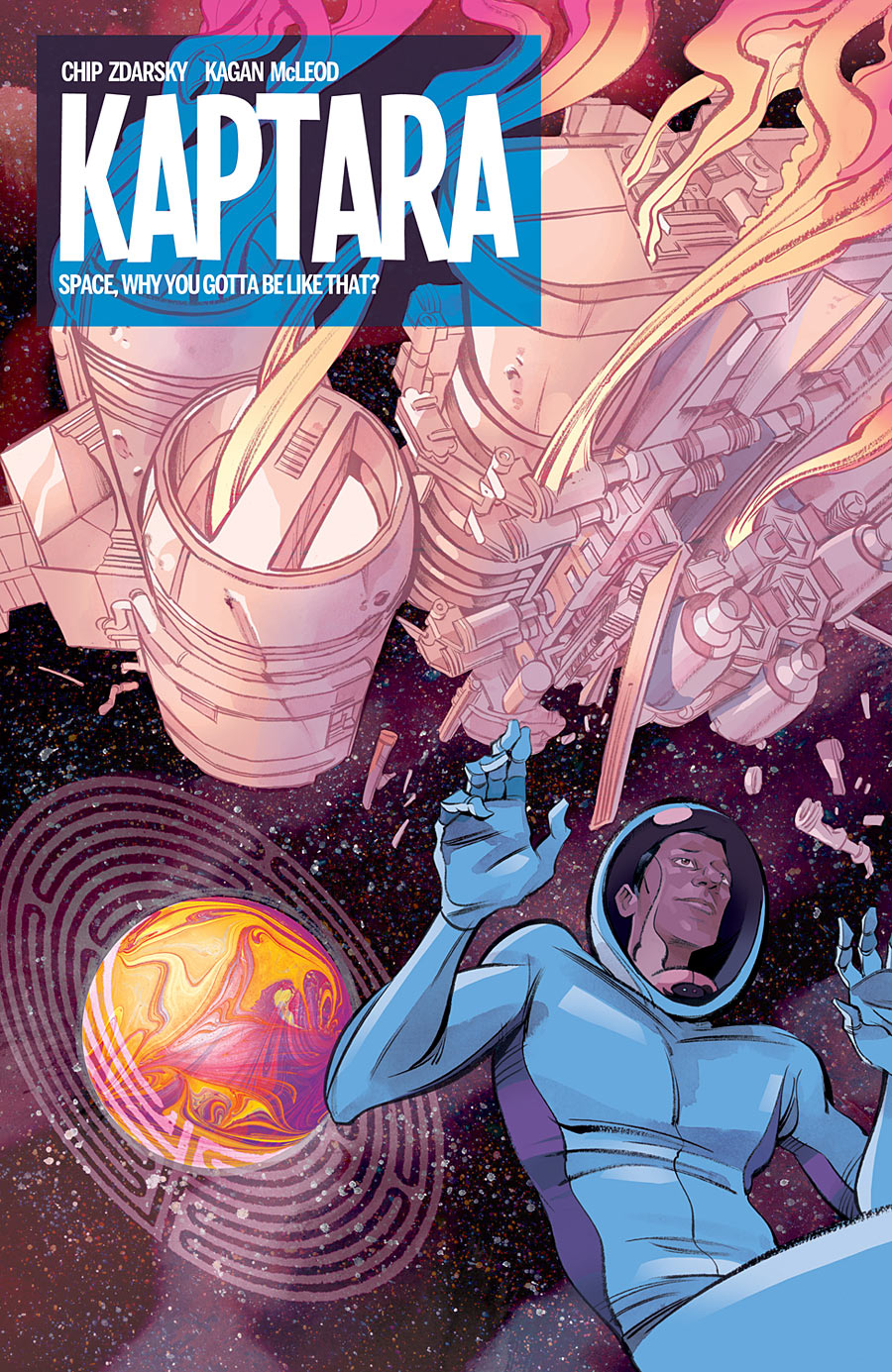 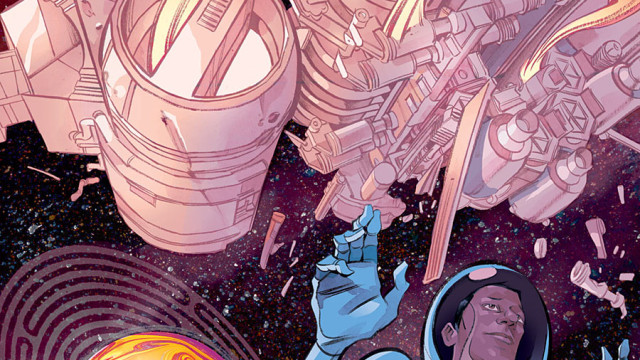 A mission to Mars goes horribly wrong for the crew in Kaptara, a book described as “Gay Saga” by writer Chip Zdarsky, referencing the Image sci-fi hit Saga by Fiona Staples and Brian K. Vaughan. This probably comes as no surprise to readers, as a) missions to Mars never pan out as intended, and b) Saga is a great comic about things going horribly wrong pretty much all the time. The comic is drawn by co-creator Kagan McLeod, with Becka Kinzie assisting with coloring.

Kaptara stars Keith Kanga, nephew to a higher-up behind the mission, who joins the journey to Mars with unclear motivations. He’s funny — even when he isn’t trying to be — and completely incapable of taking care of himself, a combination that makes him the perfect focal point for the series. He is in danger, he’s probably going to die without someone else’s intervention, and both his terrified commentary and his straighter-thinking quips make the ride all the more humorous. Other than when said ride is bloody and sad.

Zdarsky takes risks with Kaptara, mixing quirky humor with more serious-toned drama. Though space men crack jokes about exhibitionistic flings with married ladies and hologram mists describe a bad guy as “Evil. Single?”, there are also bloody deaths and the protagonist angsting about yet-unaddressed problems back on Earth. It’s an odd mix at times, but Zdarsky makes it more than palpable by delivering dialogue that’s relatable, keeping the reader up to pace with the tone no matter which angle he’s coming from, the dramatic or the hilarious. If anything, Kaptara just needs a few more issues to hit its tonal stride.

McLeod is a perfect fit for the art, with illustrations that are stylistic enough to carry Kaptara’s sense of humor, yet not so cartoonish that readers won’t be drawn into tense and suspenseful moments with held breath. His facial anatomy work and expressions are especially engaging, with each member of the cast being drawn entirely unique and with characteristics befitting of their race without veering into the caricature-esque, their vivid expressions evoking the emotional beats of the story. They are characters that look like real people, even through the whimsical lens of McLeod’s style.

The color work only enhances these visuals. They break away from completely standard blues and grays in the spaceship background with shades of purple and pink for action panels, alluding to heavier use of such colors in the second setting of the issue. Alien dirt and foliage is strange and striking in color, and yellow is utilized in place of pinks as a contrast color as the sky itself, to further estrange the reader from feeling comfortable with this weird, terrible place. They’re very tonally appropriate and moody colors, carrying a lot in terms of establishing the feel of the comic. And the watercolor-style shading is beautifully contrasting to McLeod’s pencils, giving everything additional shape and texture.

The only drawback to the fantastic art seems to be the occasional odd camera angle choice, rendering the transitions from panel to panel non-cohesive, such as when Keith trails a mysterious figure through a corridor and panels move in and out and change point of view from over one shoulder to the other without a discernible sense of direction. These are infrequent and minor missteps, perhaps noticeable only to readers like myself who have comprehension difficulties when certain kinds of transitional panels (like an early scene in which a character decides to abruptly leave her seat) are skipped or point of view wanders around inconsistently from one panel to the next.

Similarly, while the lettering is largely well-done, there are several cramped word balloons that might have better served the dialogue if they’d been split into multiple bubbles, as well as there being a few balloons that weren’t placed quite right to deliver dialogue in order between conversationalists.

But neither faulty panel transitions nor imperfect balloons cause anything more than momentary reader disorientation, just as the somewhat clunky segue between humor and drama doesn’t deter the book from being an immersive read from cover to cover. Kaptara’s hit the gross pink alien dirt running, and it just needs another issue or two to find the perfect pace for running from the big nasties of space as well as whatever it is Keith is avoiding back home.

The creative team promised smooches and beefcake, and they’re clearly not afraid to spill blood along the way.

I wrote this review over the course of two days with about four rereads of the issue. As it appears above is pretty much exactly as I wrote it during that timeframe, discussing the comic’s craftsmanship and its very minimalistic flaws. But as I read over it a final time in preparation to send it into my editors, I realized something interesting: I hadn’t mentioned the fact that the protagonist is Indian and gay.

I certainly didn’t forget he’s Indian. The art and its beautiful colors detail that with tasteful care. And I certainly didn’t forget he’s gay. It’s addressed in the dialogue, presented not as a reveal but as a detail in a tense conversation between Keith and another character about the chip Keith has on his shoulder. And as a queer woman myself and a vocal advocate for diversifying comics (both on and behind the pages), I certainly didn’t forget he’s a gay Indian protagonist — I’ve been so eager for this book’s release I demanded the right to review it in capslock. But somehow as I started writing about the book, the only thing that seemed important to mention as an analysis was that Keith is easy to laugh with and at and it serves as a great storytelling vehicle.

And that’s the thing. Keith being gay and Keith being Indian aren’t analysis-worthy in this context, because the comic didn’t hinge the narrative on either point. They are just other parts of Keith’s character. But unlike books that offer diverse characters that “just happen to be” diverse, it also didn’t make a point of downplaying either aspect of the character; we see him interact with a family member — something people of color are often indirectly denied in media because they’re a token existence with no relationships outside of those with white friend protagonists — and his sexuality is mentioned in a conversation that is more about his bitterness than his sexuality. In an ocean of stories that either overemphasize ‘otherness’ or smooth it out entirely, it’s refreshing to read.

And that definitely deserves mentioning.