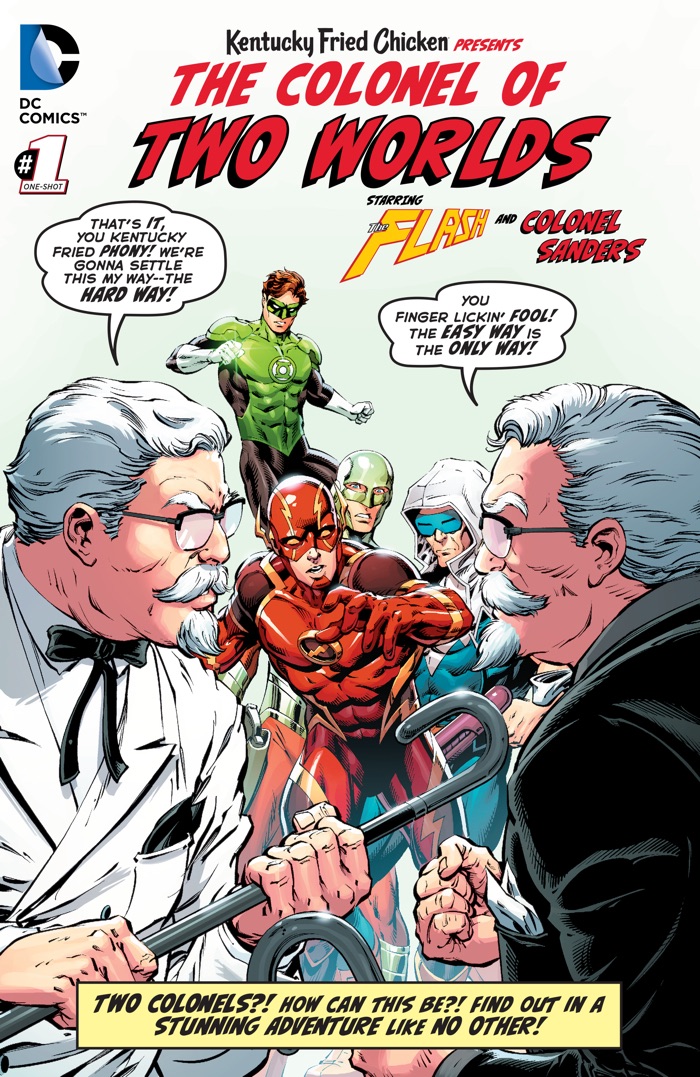 To be clear from the start, this review is not ironic. This is not a clever-clever or snarky look at this comic. The Colonel of Two Worlds was created by professional comic creators and is reviewed in that context.

DC was frequently criticized for a lack of comedy and lighter-toned comics at the beginning of the New 52 in 2011. That certainly changed in the past year with the addition of Harley Quinn, Bat-Mite, and Bizarro. The Colonel of Two Worlds adds to that refound humor with a silly spin-off of, of all things, Forever Evil. Colonel Sanders’ Earth 3 doppelgänger, Colonel Sunder, has made it to Earth 0 and it will take the combined efforts of Flash, Green Lantern, and the Colonel himself to fight back the evil scourge of low-quality chicken.

The story itself is, of course, a bit beholden to the advertising nature of the story. This is a comic-length version of the classic Hostess ads and it would not be complete without the KFC chicken-prep philosophy turning the tide. That the story is complete in one issue is a distinct mark in its favor. Often these sort of advertising pieces will be continued in-store or in another part of the campaign. Instead we get a complete story that could even fit into continuity (with some squinting).

Derenick and Scott’s art seems to be toned to follow Forever Evil. The layouts, in particular the villain reveal, would not feel out of place in a Forever Evil omnibus. The art has a clean-lined super-hero style. Backgrounds have detail but aren’t distracting, and are dropped when the moment calls for focus on character action. The cover has a classic super-hero-style confrontation with Flash, Green Lantern and a couple of rogues caught in the middle. Tom Grummett and Trevor Scott capture the moment. There is even a couple of pages of back matter for some extra laughs.

It’s not high art, and it won’t be chasing Eisners, but this is a fun one-shot that is available free on Comixology.

Keith Callbeck is the host of the We Talk Comics podcast and a columnist for Comicosity. He has Celiac Disease and cannot eat Kentucky Fried Chicken. Twix are also out.