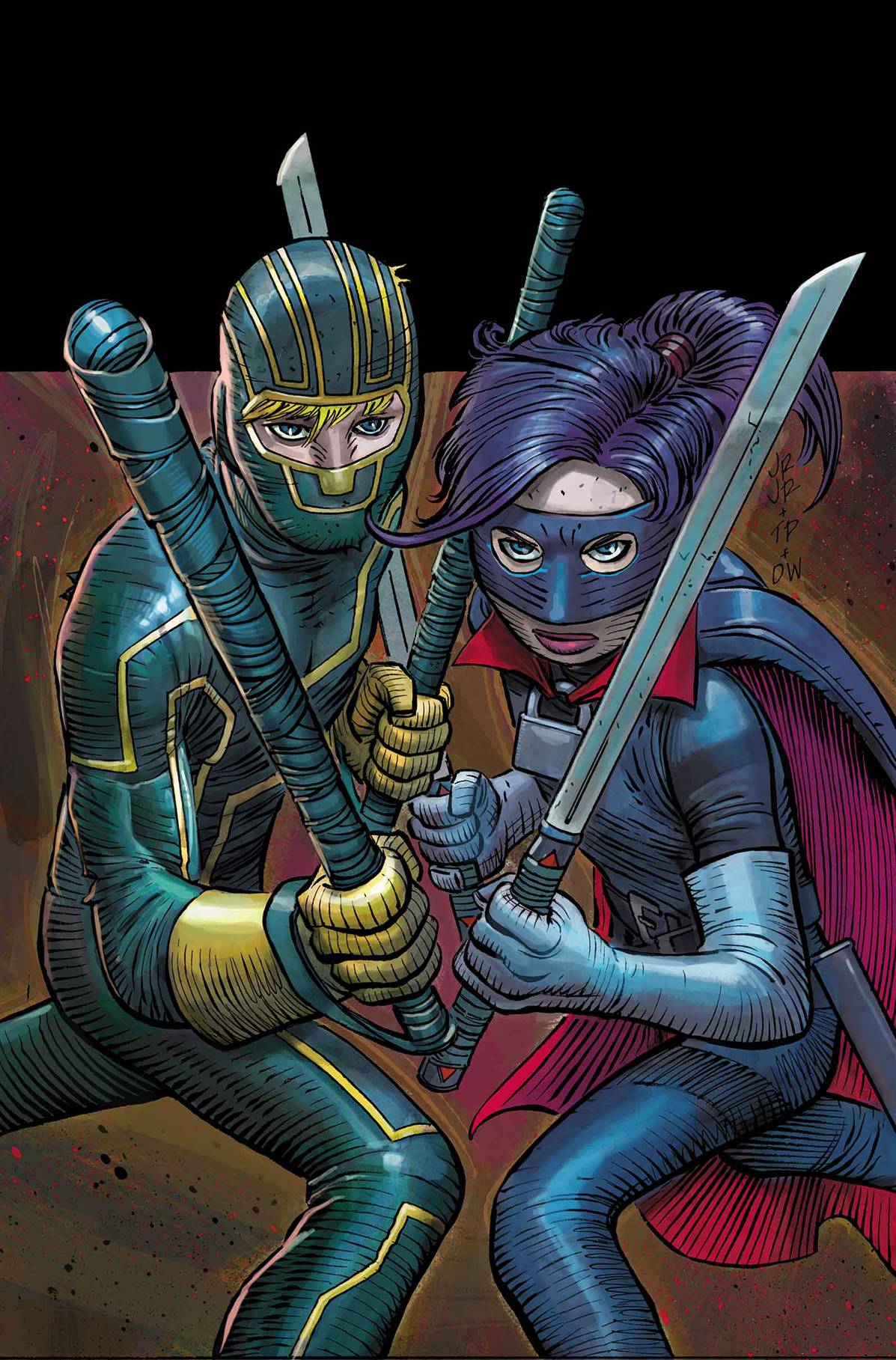 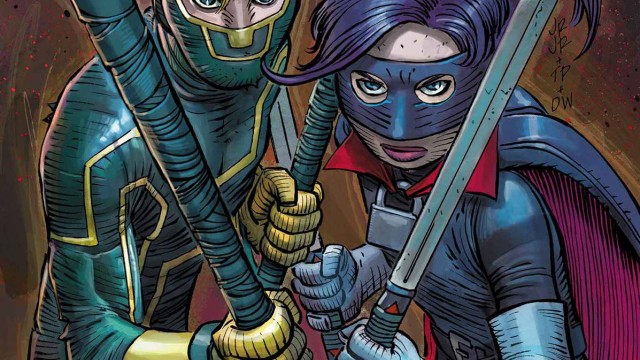 Over six years, twenty-eight issues, and two blockbuster movies later, Mark Millar and John Romita Jr. say goodbye to the characters that changed their lives forever. Kick-Ass entered the public consciousness, and helped launch the Millarworld imprint to heights rarely seen by creator owned comics. Millar and Romita bid farewell to Dave and Mindy in an explosive super sized issue that, for better or worse, is quintessentially Kick-Ass.

The Kick-Ass series isn’t for everybody. Over the years it has been over the top, vulgar, controversial, and hyper-violent. Given that this is the review for the final issue of the entire saga, I’m writing this from the perspective of a reader that has been there from the very beginning. I don’t expect anybody to be swayed in their opinion of the book one way or another by this issue (or this review for that matter). If you’re a fan that has been around awhile, the ending should be looked at as a resounding success.

Kick-Ass 3 #8 is forty-eight pages featuring a little bit of everything that fans of the series have come to love over the years. Millar’s script here feels like the third act of a R-Rated, big budget summer blockbuster movie. The first twenty-five pages or so are devoted to the big final battle with Kick-Ass and Hit-Girl taking on NYC’s organized crime leaders, including the head of the Genovese Family. This is a franchise whose bread and butter has been extreme violence, and the final issue does not disappoint in that regard. The body count is just as high as expected, and action scenes are both extremely clever and ridiculously brutal. The great action may be par for the Kick-Ass course, but the added knowledge that it’s the final issue gives it a sense of urgency that keeps you turning the page in anticipation for what happens next.

For all the talk about violence in the book over the years the emotional core has often been overlooked. Kick-Ass has always been a superhero story about outsiders that try to make a difference. In many ways, it can be viewed as an exaggerated love letter to comic books and the people that read them. While it hasn’t always been apparent throughout the years, Millar is able to capture this aspect of the story quite nicely in the finale. There is one scene in particular here that is quite on the nose about this. The scene ends up working because nothing has ever been very subtle in the series, and the scene fits right in. Looking at the issue through this prism explains a lot, and may allow the entire series to be looked back on for more than just its controversial approach to violence.

With all of that said, the final fifteen pages that serve as the conclusion are full of comic book cliches. Every aspect of the wrap up is something that we have seen before. That seems to be the point. The twenty-eight issues that makeup the saga of Kick-Ass come together to tell what is a very traditional superhero story at its core. The story is about a kid who is inspired by the comic books he has read who ends up living out the life of a superhero. Why would one expect the ending to deviate from this path? The end result is emotional, inspiring, and will leave you hopeful. With a callback to the very first issue we get the idea that this may be the end of Kick-Ass as a character, but it’s just the beginning for the Millarworld Universe.

Right alongside Mark Millar for the past six years has been artist John Romita Jr. JRJR, as Romita is often referred to, has been in the industry for years. He has been one of Marvel’s go-to artists in four different decades, and recently made the jump to DC to work on the high profile Superman with Geoff Johns. It is safe to say that he has had an illustrious career. When we look back at JRJr’s career years from now,  we’ll unquestionably say that Kick-Ass will be right there with his runs on Daredevil: The Man Without Fear and Amazing Spider-Man as the very best of his work.

As good as his work on the previous twenty-seven issues has been, Romita may have very well saved his best for last. His work has never looked better than it does here in the twenty-eighth and final issue. As mentioned earlier in the review, the action scenes are have always been the strong point for Kick-Ass, and that is in large part due to Romita’s ability to layout an action scene. Whether it’s the bigger action pieces featuring Hit-Girl or the more hard-hitting, relatively intimate scenes with Kick-Ass the action flows wonderfully. The extra pages in the issue seem to help the number of panels on each page to be kept low, and allow the action to breathe a bit. There are a few splash pages that are phenomenal both cosmetically, and in their impact on the story.

The work of inker Tom Palmer and colorists Dean White and Michael Kelleher cannot be overlooked enough. These guys bring out the absolute best in Romita’s pencils. One of the biggest complaints that Romita detractors have is the “scratchiness” of his work. Palmer is able to rein it in quite a bit with his inks and washes over the pencils. The washes in particular give the provide a great look that elevates Romita’s work to some of the best in his career. Then when you throw in the work of one of the top colorists in the industry in Dean White, you have an art team firing on all cylinders.

In my interview with Mark Millar a few months back he talked a bit about how important Kick-Ass was to him. He touched on how much it changed his life both creatively and financially. After reading that it should have been clear that he wasn’t going to say goodbye to Dave and Mindy without giving them some of his very best work to close it out. The same can be said for the entire creative team, as the series ends on one of its most creatively satisfying issues.

There’s a great sense of closure that feels good to have in a superhero comic where most of our favorites continue perpetually. Kick-Ass will never be for everybody, but for those of you that have enjoyed the ride you will not be disappointed. Oh, I never thought I’d say this about an actual comic, but make sure you stick around for the credits.