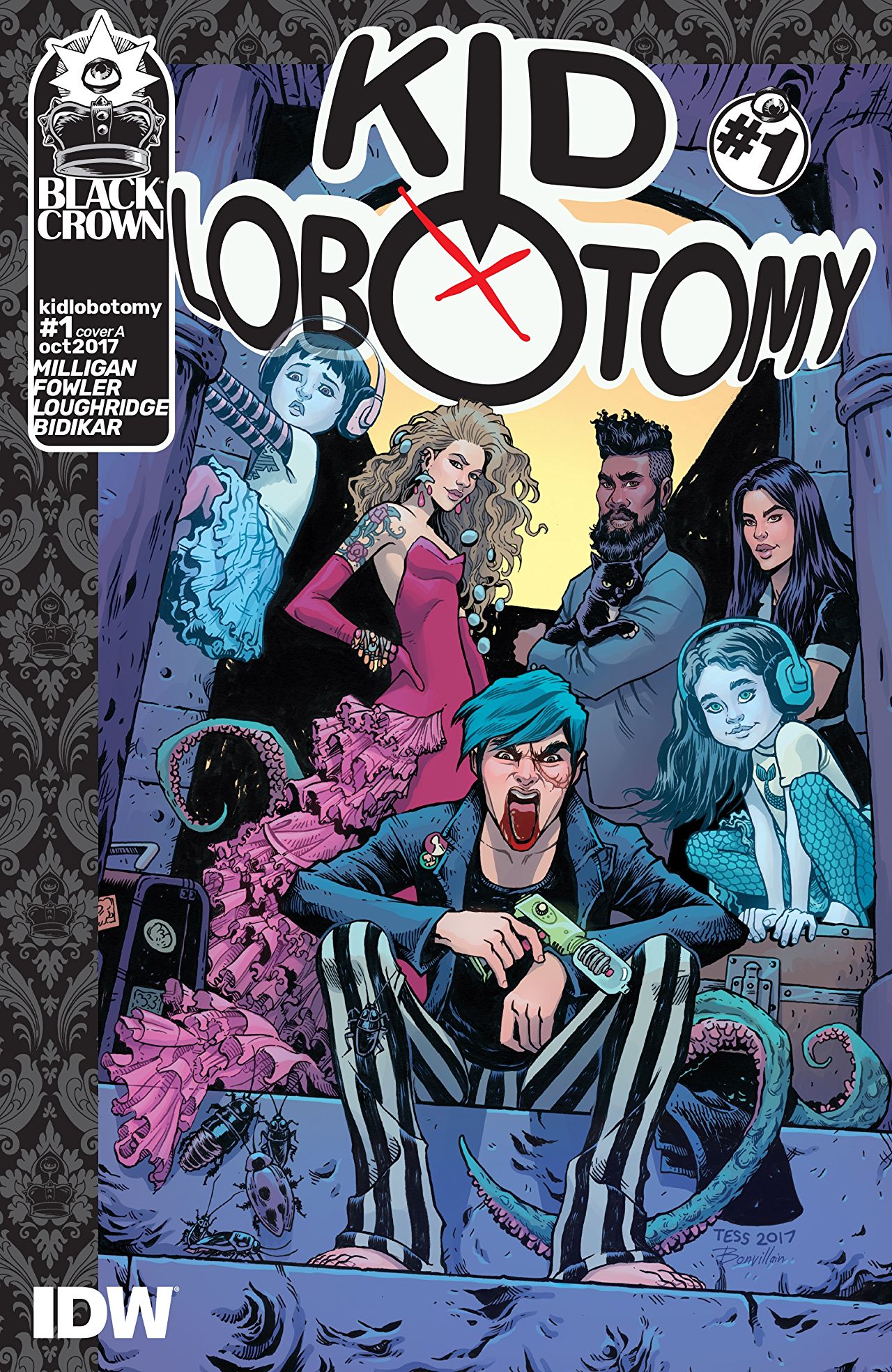 As 2017 heads into the homestretch, it’s becoming clear that one of the dominant stories about the year in comics will be the role of editor as talent scout, curator, and tastemaker.

While the phenomenon extends as far as veteran editor Joe Illidge heading up Lion Forge’s Catalyst Prime line, the conversation so far has been focused on the past, present, and future of DC’s once venerable Vertigo line. Founding editor Karen Berger is set to launch Berger Books through Dark Horse, Gerard Way is merging his Young Animal imprint at DC with what remains of Vertigo, and of course, former Vertigo editor Shelly Bond is launching her own imprint, Black Crown, through IDW Publishing.

One of the most intriguing features of Black Crown is Bond pairing veteran creators with up and coming ones to explore generational divide on an aesthetic and storytelling basis. All this at a time when there are significant and fraught intergenerational fault lines in the industry, making it both an artistically and socially intriguing approach.

Launching Black Crown with a Peter Milligan-fronted book is a calculated, safe move for Bond because of both their significant collaborations and his being the dark horse of Vertigo’s prime. Milligan is probably best known for his revival of Shade the Changing Man or his wildly satirical X-Statix series for Marvel that flamed out over an aborted posthumous parody of Lady Diana. But Milligan also has the deepest cuts in the 90s Vertigo catalogue, particularly his collaborations with Duncan Fegredo like Face and Girl.

Pairing Milligan with renegade artist Tess Fowler is the actually attention-grabbing move here, which is clearly visible both on and off the page. Putting Fowler on a flagship book for a new line is, in the current industry climate, as much of a political move as it is a recognition of her relentless drive for self improvement.

Fowler’s strong, vocal stances on a range of issues including gender, race, harassment, and ethics within the industry reverses the typical dynamic of a creator being validated by who picks them up. So it will be well worth watching to see if Black Crown will live up to the kind of innovation and inclusiveness that Fowler advocates for long term.

The hope for a title like Kid Lobotomy at a venture like Black Crown is to produce a reinvigorated Milligan and a surging Fowler, but the debut issue doesn’t deliver any of the frenetic energy that kind of collaboration should produce. Pairing with someone that has Fowler’s confrontational, aggressive energy has a great deal of precedent for Milligan, especially in the vicious satire that drove his collaborations with Duncan Fegredo at Vertigo and his brief stint with Jamie Hewlett on Tank Girl.

But Milligan seems profoundly stuck in a creative rut on Kid Lobotomy, delivering a predictable buffet of his standard themes and ideas not currently in use by his current Vertigo series New Romancer, which is probably the only reason that we’re spared references to Byron and Shelley this issue.

In theory, the idea of Milligan splitting influences between titles and publishers, leaning heavily into the romantics and a light, comedic vibe at Vertigo and drawing on a much darker network of Poe, Burroughs, Kafka, and Freud for Black Crown is intriguing. However, Kid Lobotomy doesn’t offer any exciting or innovative perspectives on those influences. As of the first issue, the setup is more or less the most expected take on American Gothic imaginable: the eponymous hero is a failed rock star who traded his guitar in for a harp, lives in a dilapidated hotel owned by his family, and has an incestuous relationship with his bad girl sister.

Combined with its outdated and unexamined cartoonish take on mental illness, Kid Lobotomy’s premise comes across as the sum total of what Mother Panic has set out to subvert and destroy within that particular literary tradition. There’s plenty of opportunity to mine influences like Kafka and Burroughs to inform perspectives on mental illness and otherness, but Milligan’s take is especially retrograde when considered in the context of a contemporary mainstream marked by the disarming, visceral account of going off and on SSRIs in Sex Criminals or the radical repurposing of Two-Face as a metaphorical framework for managing mental illness in All Star Batman.

Bizarre experiments in lobotomy, cannibalism, and experimental psychology have their place in fiction to be sure, but there isn’t much value in doing so as a setup for cliched bouts of psychotic violence that prop up noxious stereotypes. The fixation on Kid’s sexual interest in his sister rings hollow as well, especially given that stepsister fetish is a burgeoning, highly visible category of mainstream porn used as a proxy for exactly the kind of incest played with in Kid Lobotomy. Ultimately, Kid Lobotomy finds itself leaning on a set of taboos that don’t play as particularly shocking or transgressive in the current environment.

Despite all that, Fowler dives into the comic with gusto, clearly reveling in what Milligan is giving her, and it’s not hard to see why. Kid Lobotomy’s cast and setting are a buffet for Fowler’s sensibilities. Kid himself is an interesting opportunity for Fowler, who, coming from Rat Queens as her last significant gig, hasn’t had much of an opportunity to explore male figures in much depth. She makes up for it in spades, projecting a curiously sensual, feminized appearance for him taken to the extreme by Frank Quitely on the variant cover.

There’s a clear desire being projected by the comic to view Kid as both sexual subject and object, but it’s a democratic ideal problematized by the fact that the only major female characters to be introduced so far, Kid’s sister and shapeshifting employee, only exist in the context of Kid’s sexual proclivities. Kid spends most of the issue hung up on his attraction to his sister to the point that he apparently begged Ottla, the shapeshifter, to have sex with him appearing as his sister.

It’s a pattern that repeats itself throughout the issue, Fowler throwing herself into the subject matter, finding opportunities for deep, expressive moments and evocative facial expressions for ideas that would be flimsy and paper thin without the raw energy she pours into them.

The central image of the debut issue that sums up Milligan’s seeming listlessness is an early depiction of Kid parading around in Union Jack briefs and unlaced Doc Martens. It’s an anachronism that was so ubiquitous at the time of his creative peak that he never deployed it or anything quite so crassly Cool Britannia without being slathered in sarcasm, but reads here as an empty symbol that doesn’t seem to know exactly what it wants to express.

There’s a great many postures that could be read into Kid Lobotomy and Milligan’s approach to it like bleak nihilism or self parody, but Milligan at his best is so sharp and undeniable in the tone that he sets for his work, particularly the more pointed satires like Girl or X-Statix, that it feels forced and inappropriate to speculate. What’s so simultaneously disappointing and amusing about Kid Lobotomy is that Milligan and Fowler are incredibly well matched, which is as much a win for Bond’s matchmaking skills as it is for them, but the listlessness of the subject matter and its execution are a potentially fatal flaw for the long term prospects of the series.

Fowler’s embrace of the concept and the palpable energy she puts on the page, backed by the most conventionally leaning coloring in Lee Loughridge’s recent work — eschewing the minimalist palettes he opened his work on Catwoman, Black Canary, and Wolf with a softer contrast more reminiscent of Fowler’s frequent collaborator Tamra Bonvillain — is more than enough to justify an initial investment in Kid Lobotomy, but Milligan will ultimately have to tug a lot harder at the threads he introduces here to draw out the considerable potential of their collaboration.