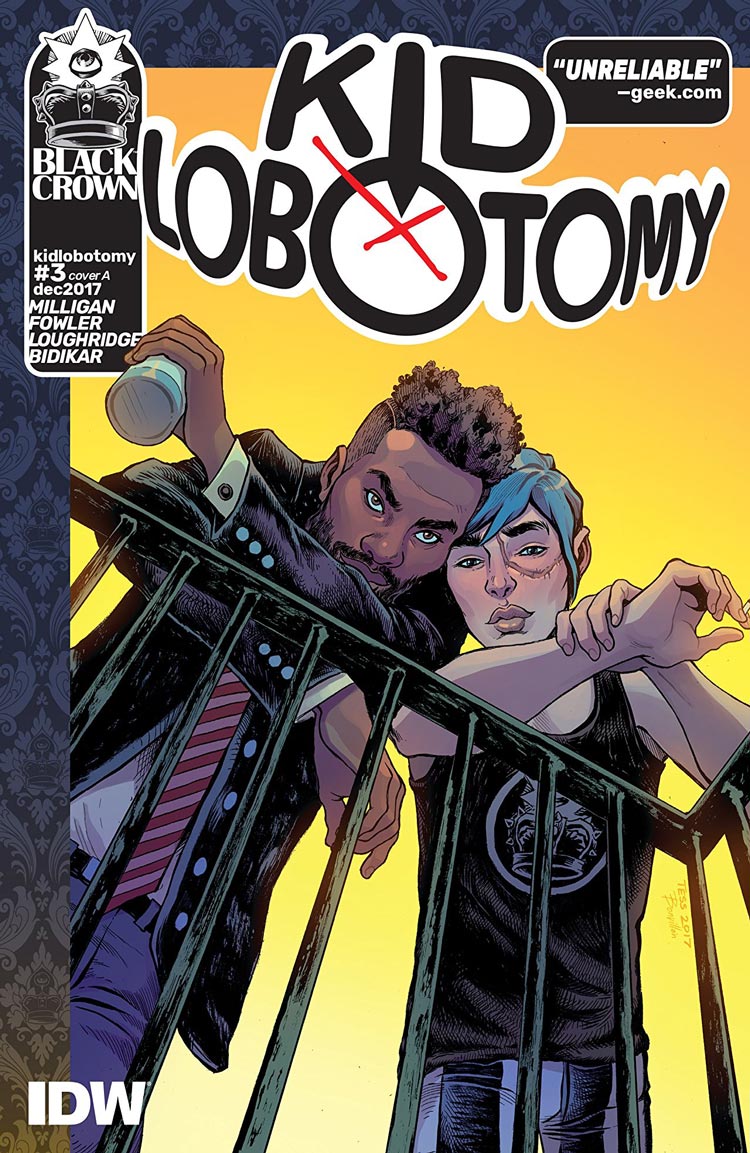 After a debut issue that felt like a suitcase full of too familiar references and stereotypes, followed by what felt like a complete abandonment of narrative pretentions in favor of letting series artist Tess Fowler run wild in the second issue, Kid Lobotomy has achieved an internal rhythm by finding purpose and place for all the bits and bobs that have been thrown at us so far.

There’s a pretty coherent narrative running through this issue: the literally bugged-out Kid wanders the deepest bowels of the hotel trying to recover lost memories while his sister attempts to complete her coup by leading a reality TV crew through the hotel in a bid to scare up new guests. How much that coherency matters in the wake of last issue’s glorious, art driven trip into complete surreality is a matter of conjecture, but that story is where the Kafka fixation begins to bear fruit beyond being an excuse for Fowler to draw giant bug monsters.

What emerges from Kid’s time in the darkest corners of the hotel is that he retreated into Kafka as a means to escape from the trauma of his youth, making his semi-transformation into a cockroach a symbol of personal regression as well as being more obviously atavistic.

It’s this aspect of the issue that Fowler comes out the strongest as Kid encounters the ghosts of children he tried to save from a fire in the laundry room years prior. The juxtaposition of the monstrous with the innocent and children interacting with monsters and the grotesque is a key interest of Fowler’s expressed repeatedly in her personal artwork, making it a pretty obvious place for her and writer Peter Milligan to truly click for the first time.

The deep blacks and silhouette heavy figurative work in these sequences are a watershed moment for Fowler artistically, giving her space to work out how to integrate the washy inks she’s expanded throughout the series in a context where their immediate flatness doesn’t clash with the sense of depth she and colorist Lee Loughridge build up in most interior scenes. It’s the kind of personal innovation that monthly comics can be a brutally unforgiving environment for, but Black Crown is clearly a space meant to create and sustain collaborations that need breathing room to develop.

The sequences that are the most fertile for Fowler are also the most productive for Milligan, who transitions the Kafka references from being one of many ingredients in a word salad to a fascinatingly unlikely fantasy world for a young mind to escape to. This is where the legacy of his deep cuts at Vertigo, especially Girl, are finally being felt as Kid emerges as a genuinely damaged soul whose subconscious has gone to extreme lengths to process what it’s endured.

There’s still ground to make up, particularly in that Ottla has yet to emerge as much more than a kind of manic pixie dream girl for Kid. Milligan assures us she has depths yet to be discovered, and this issue in particular suggests there’s reason to believe, but the proof as ever is in the pudding. Ultimately, Kid Lobotomy doesn’t need to be anything more than a vehicle for Fowler to demand its purchase, but there’s clearly potential — and ambition — for much more.