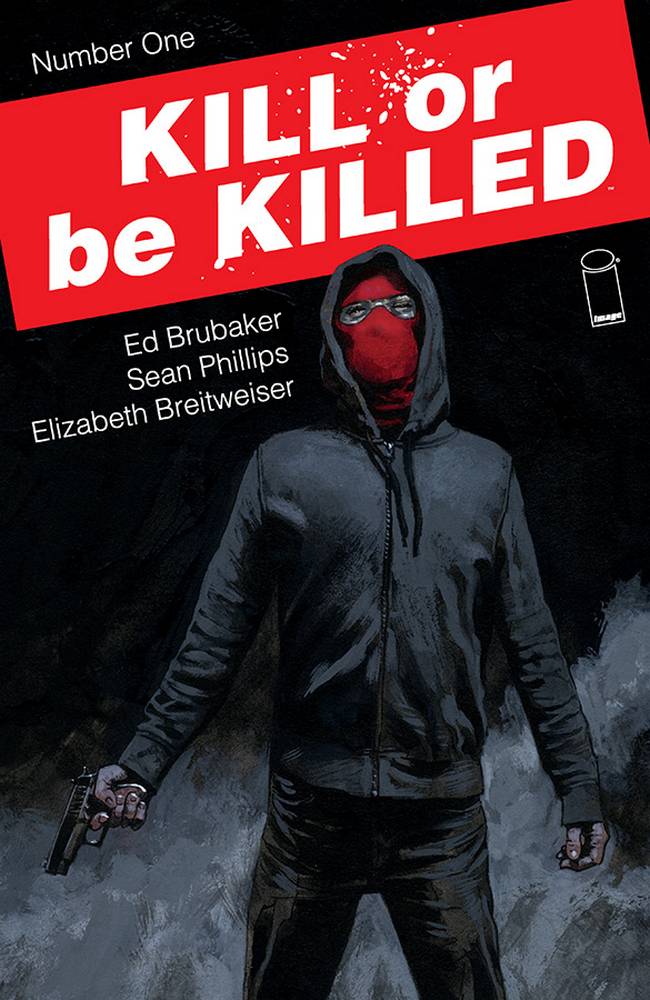 It’s a dog-eat-dog world out there, never explored more callously than in Ed Brubaker, Sean Phillips, and Elizabeth Breitweiser’s new Image series, Kill Or Be Killed. This first issues opens with several shotgun bangs and closes with the soft fizzle of gently falling snow over a man faced with the hardest task of his life — find someone just bad enough to kill or you’re dead. This first issue is an emotional roller coaster from the very beginning, and it’s clear that the creative team behind The Fade Out has done it again.

When 28-year-old Dylan tries to kill himself, he finds that tiny miracles can happen after a last moment realization that he wants to live. After jumping off a snowy rooftop, he’s snagged in a laundry line, saving his life. However, he soon finds out that his life is far from saved, as he inadvertently entered a deal with a demon. Every month now, he must take a life to save his own. The life that he takes should be that of a bad, deserving person (a la Dexter), whatever that may mean to him. Needless to say, his previously sad life (driven by unrequited love and lack of career fulfillment) has quickly become much more complicated.

This book is downright gorgeous. Sean Phillips manages to depict the abrasive and violent overtones of this book and soften the blows with strong character composition. His effectiveness in capturing raw human emotions drives this book to dark and relatable places, juxtaposing the brutality of Dylan’s actions with the unease and uncertainty working within his mind. The opening sequence is filled with a confidence captured by bold body language and powerful visual effects, which slips into a softer display of Dylan’s rough life. Phillips is a master of inking, plunging the reader in a dark world of deep blacks and shadows, bringing you back out to see the eloquently illustrated and realistic characters on each page.

Elizabeth Breitweiser adds an invaluable amount of emotion and tone through her colors. As we learn about Dylan’s past and what brought him to the murderous rampage of the opening pages, the colors are softer, more mundane, capturing the normalcy of his (albeit disappointing, by his standards) life. However, when the action explodes, so do her colors, offering a violent display of orange and red hues, pushing the hardened acts to the forefront. The palettes she utilizes for the snowy backdrops are gorgeous as well, presenting an almost innocent pallor to the book as it proceeds to its climax and works its way to the final pages.

Kill Or Be Killed is a book that looks as glorious as it reads. Brubaker has portrayed a very salient voice throughout this story. Every panel, bit of dialogue, and continuous narration reads consistent in character. This is a very heavily narrated book, yet I didn’t feel bogged down by the text while reading. The flow of the narration was smooth, and the story unfolded in an edge-of-your-seat manner. I love the way that Brubaker added layer upon layer to the character by telling the story, having him pause and recount important moments the same way someone might in person. The voice felt authentic (though I don’t think being a 28-year old grad student is anything to scoff at), and I felt like I could sympathize with the Dylan by issue’s end. There was plenty to engage the reader personality-wise, but the plot was beyond a doubt the most interesting thing about this issue. The set-up promises a rocky road in the future as well as a thoughtful approach to making sense of the value of human life. It’s very consciously tied into the dystopic worries of our country’s current state of affairs. This is the kind of comic that make you take a good hard look at society and your viewpoint on the various players moving within it.

Kill Or Be Killed #1 is a fantastic opening issue. This series has it all: action, an intriguing mindfulness, and passionate illustration. I was engrossed in every panel on every page, and this issue stuck with me as I continued throughout my day. There are a lot of elements here that work well together, and I can’t wait to see the magic happen again next month.