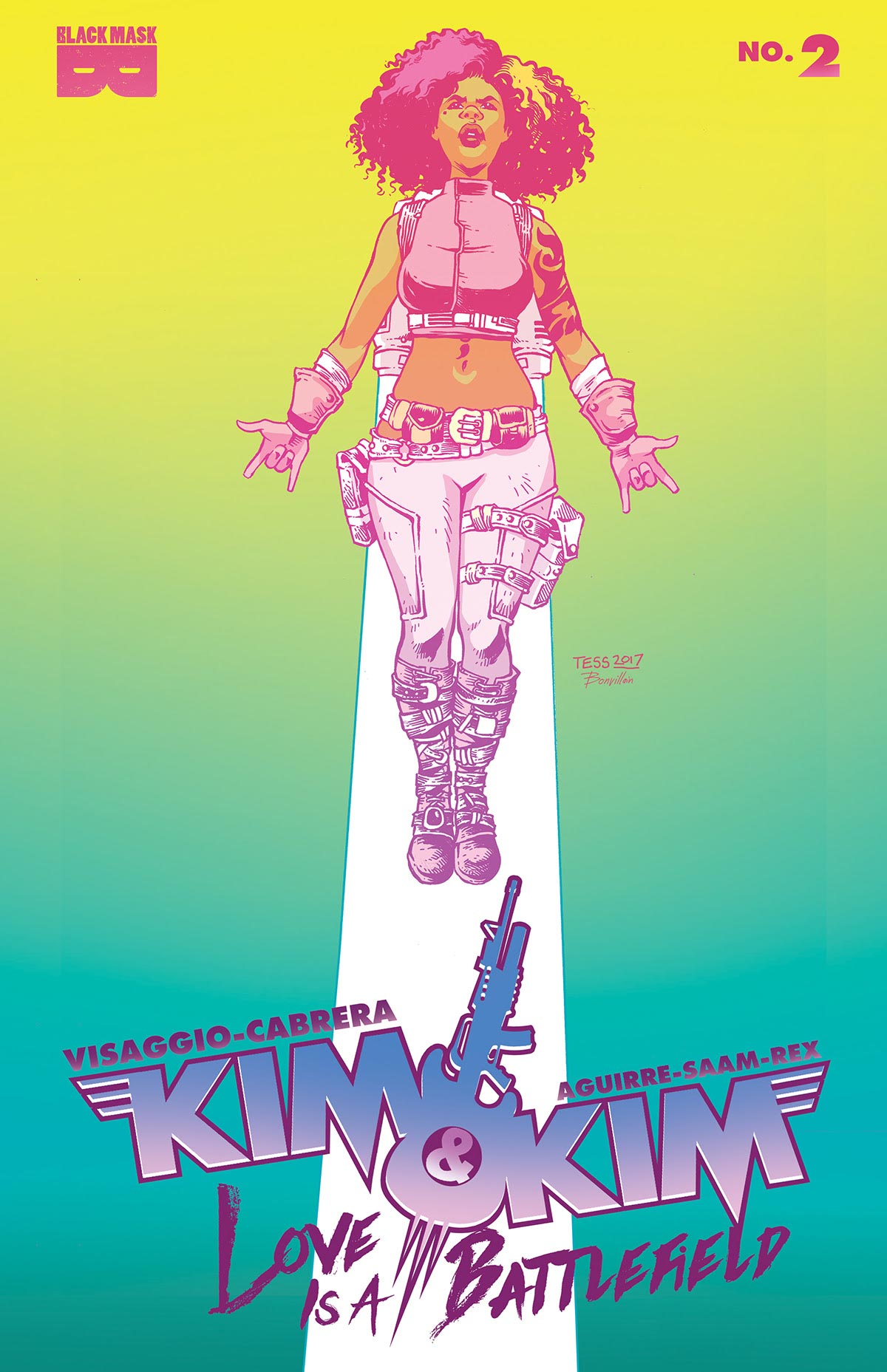 In Kim & Kim: Love is a Battlefield, our heroines Kim Quatro and Kim Dantzler had been celebrating their success at a recent interdimensional bounty-hunting job. After facing difficulties making their rent payment in the previous series, it seemed that that the Fighting Kims were finally having some good fortune, but surprises for the duo are never too far away. Characters from their pasts suddenly reappeared and their situation got complicated all over again.

Visaggio’s writing has served well throughout this series in showing the characters’ personalities and interactions with one another. Conversations between the two Kims convey how well they know each other and how much they care about each other. This issue shows that their many years of friendship have lead them to where are now; they can predict what the other will say and are concerned when the other is hurt. Even when they clash, it’s clear that they want to maintain their relationship and are trying to do so. The book has also been good about bringing up conversations about queer and trans identities of the characters in believable ways that fit into the story, and this issue was no exception.

Cabrera and Aguirre’s artwork has been great in conveying the fun tone of the book, with fast-paced pages and bright colors throughout. Details about the characters’ appearances, such as tattoos and jewelry, were noticeable and fun parts of the character designs. Among my favorite aspects of the art in this book, which continue in this issue, are the specific panels with detailed backgrounds. From the quiet moments at home, to the travels in their flying van the Contessa, to the exciting interdimensional adventures, certain panels help to convey the tone of the series as well as a feeling of the expansive world that exists despite the short length of the series. I’m hoping for more background details like this in the next two chapters.

While this issue is very much a middle chapter, in that we get some follow up from the last issue and a surprise that will lead into the rest of the series, this doesn’t diminish the enjoyment of learning some more about these characters’ backstories in a way that simultaneously advances the plot. One of the things this series does well is handle the job of developing a varied cast and a multi-dimensional setting in the space of very few issues. Such detail and development is often a challenge, but it is especially so in a book with a limited number of pages to convey a lot of information to create a coherent story. The reader gets a sense that the world of the story exists beyond just the small corner that we’ve seen in these pages and makes me want to know more. This very much feels like a story world that is built with the potential for lots of adventures.

In addition to the main story, the last page of the issue includes an essay by Natalie Reed. The essay is well worth reading and will likely be of interest to queer fans who are all too familiar with the discussions about queer comics and hoping to expand that conversation to a broader range of queer stories in the comics medium.

I’m definitely looking forward to the rest of this series, including learning more about these characters and their multiverse. I would suggest reading the previous four-issue series (which has also been released in trade paperback) first, and then this one. Kim & Kim is a welcome bit of fun in a time when some more joy is needed.