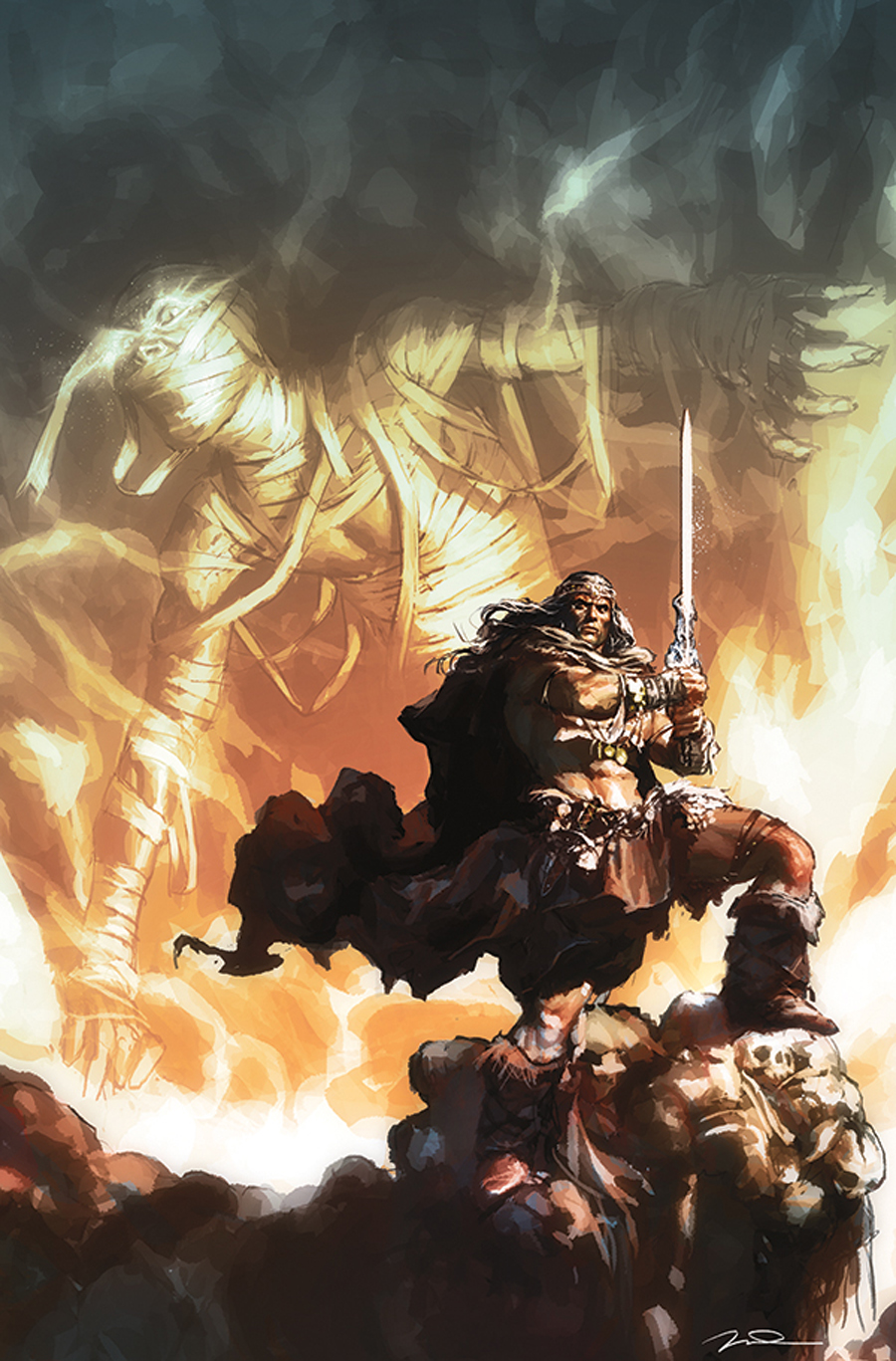 KING CONAN: THE HOUR OF THE DRAGON #1
Written by Timothy Truman
Art by Tomás Giorello and José Villarrubia
Release Date: May 29, 2013 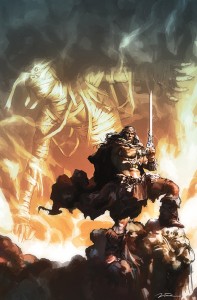 Conan — a Barbarian no more — is now King of Aquilonia, the brightest and proudest kingdom in all the lands. In the wake of a Black Plague that devastated all around them, a neighboring land takes their recovery to the next level and plans an attack to usurp the Cimmerian’s rule. As an ancient evil rises to assist, Conan must battle against seemingly insurmountable odds, in a story that will ultimately reveal his meeting with one of the great loves of his life.

This newest mini-series from Dark Horse Comics is the first half of an adaptation of the classic Robert E. Howard (creator of Conan) novel, The Hour of the Dragon.  As a result, I’m a little torn in how to experience the plot pacing and dialogue. I am not familiar with the original work itself, but Truman’s work as adaptor/interpreter seems to fall in line with much of what I’ve read of Conan — and the sword and sorcery genre generally — to date. It’s not the most compelling literary form for me personally, as I tend to find the dialogue a bit forced and dry, but it does suit the characters and their approximate time periods in our imaginations. The use of flashback to tell the story of Conan’s challenge from beyond the veil is a little problematic, as flashbacks often are, in that it reveals immediately the King’s ultimate success in this endeavor. For someone well-versed in Conan lore, this would not likely be a detriment, but as a relative novice to his world, I found it took the drama of the narrative down several notches.

What more than made up for this, however, was the work of both Giorello on pencils and Villarrubia on colors — particularly in the absolutely stunning first five pages of introductory framing. The representation of light the artistic pair render on the page is nothing short of glourious, as the setting sun leads to a glowing torch that can split the page with its radiance as easily as it softly glides over the well-worn face of a tired old king. Every detail of the elder Conan’s façade, from long grey whiskers flowing down to the deep cracks circling tired eyes, is illuminated so lovingly and to absolute perfection in these initial pages. As we move further into the issue, these moments of subtle majesty seem to become less prominent, but are replaced for the most part by the sheer physicality of Conan’s haggard face and massive frame that has defined him so well for so many decades. Not every panel thereafter is such a clear lesson in precise beauty, but the overall effect of by the end is still overwhelmingly positive.

An elegantly illustrated first issue, in what will amount to an even dozen before the inspirational novel is fully adapted, King Conan is off to a well-honed start that is likely to please long-time fans of the genre and the legend of the Barbarian. Results for the casual reader may vary, but there’s no question there’s enough beauty amidst the panels in these pages to please almost anyone.