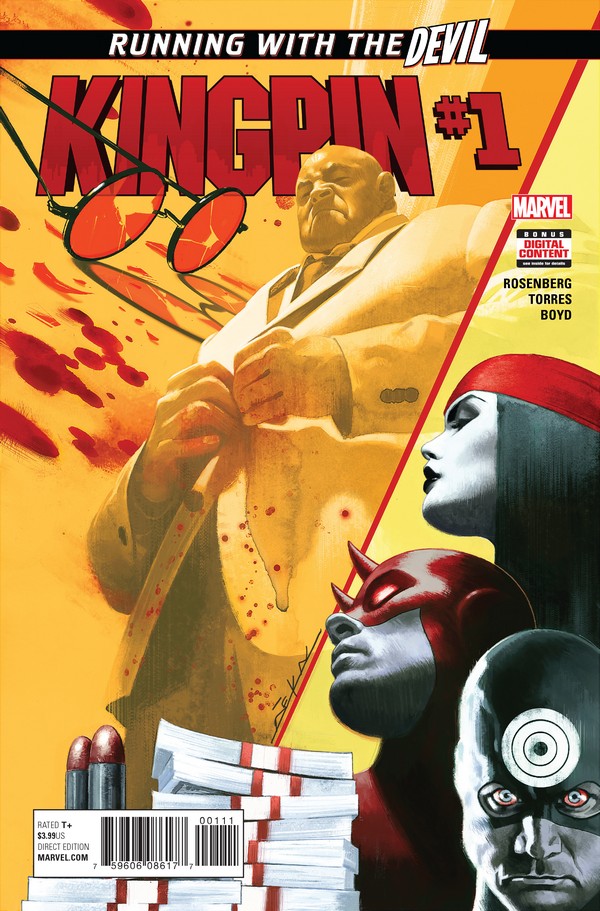 “Born Against” launches the all-new Wilson Fisk-centric series in Kingpin #1. Written by Matthew Rosenberg and drawn by Ben Torres with colors from Jordan Boyd and letters courtesy of Travis Lanham, this issue gives Fisk plenty of face time and even some enlightening conversation, with Daredevil kept at arm’s length, although District Attorney Matt Murdock makes an appearance.

Reporter Sarah Dewey serves as the gateway character to bring readers into Fisk’s life, by way of the boxing ring. As Rosenberg tells us through Fisk, he has a story to tell. He wants Dewey to help him tell it. Thus begins the adventure.

Rosenberg writes a believably vulnerable Fisk, who sincerely wants to change and believes he can. The problem is, he’s still Wilson Fisk. And no one – NO ONE – is going to be able to believe his story, no matter how it’s filtered, spun, decorated, or re-imagined. That makes for a challenge for both Fisk and Rosenberg. The Kingpin should be sinister and dastardly. He should be crooked and slippery. He should be the guy that makes people lose control of their bowels when he gets mad. But Rosenberg is offering us the possibility that maybe, just maybe, Wilson Fisk is ready to move on from that. To grow. To change.

Ben Torres still draws Fisk as a physically imposing character. He’s big in every panel he appears in, frequently bordering on superhumanly large. He has a wide range of angry faces and even more displeased expressions. And every time he shows up, he casts shadows, on himself, on others, on the scenery. These shadows make for some fun illustration choices, and silhouette play, but Torres repeats a few of those choices a little quickly and too close together, bordering on the edge of gimmicky. It doesn’t fully cross over, but the Dewey phone call panel could use a little more breathing room before the technique is repeated.

The art in Kingpin #1 hovers between Paul Smith and John Romita Jr.’s DD work, with some heavier inks over top. Boyd’s colors are functional and crisp, and even sometimes washed out for emotional response. This looks like a street level book from the pacing to the panels, from the shadows to the highlights. The art team keeps a mostly talking-head issue chugging along nicely, offering a wide array of imaginative presentations.

Kingpin #1 offers enough intrigue to fuel a story arc, but convincing me that Wilson Fisk is someone I should be empathetic towards is going to be a real hard sell for reasons mentioned above. Rosenberg, Torres, Boyd, and Lanham definitely have their work cut out for them. They also have my attention.