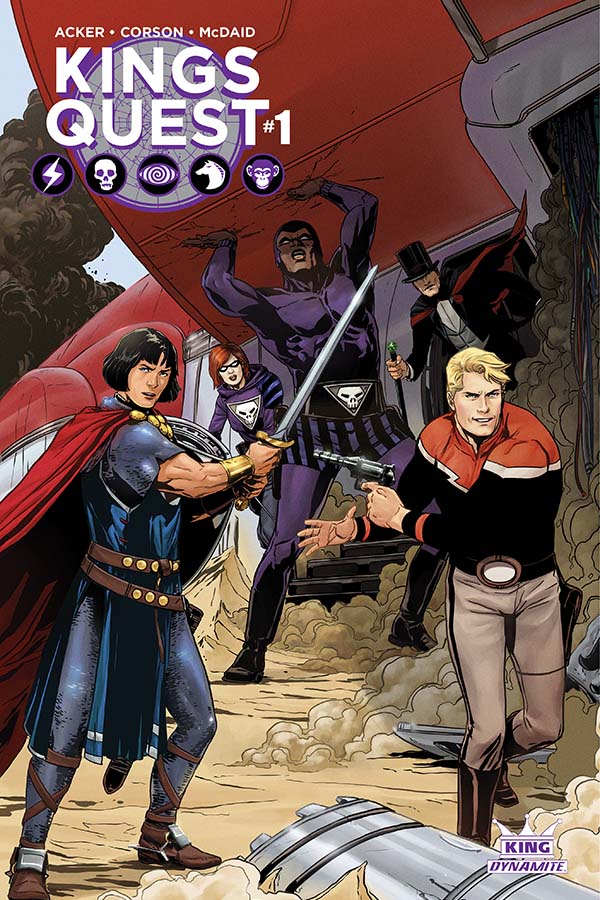 Co-written by Ben Acker and Heath Corson with art by Dan McDaid, colors from Omi Remalante, and lettering from Simon Bowland, Kings Quest #1 continues the adventures of the collected King Features Syndicate heroes. Flash Gordon, Mandrake the Magician, Prince Valiant, and two Phantoms head off into space to rescue science reporter Dale Arden. Arden’s reporter gal pal, Jen Harris is one of the Phantoms, while Lothar is the other purple-clad adventurer.

The issue opens with the crew on a rocket ship bound for disaster. Acker and Corson tell the tale through Harris’ point of view, which includes a relatable rationalization of space travel, poor landings, and alien environs. The writers present the larger-than-life moments nicely, while balancing all of the characters who could (and have) each supported their own solo adventures as they try to find their way on Arboria. Flash Gordon could easily steal the spotlight, but the writers don’t allow that to happen, instead balancing the rest of the cast, making Kings Quest #1 a team book, despite the wide array of backgrounds and skillsets.

Acker and Corson give McDaid plenty to draw, from the medieval pseudo-armor of Prince Valiant to the blended behemoths rampaging through the Arborian forests. The artist’s style is reminiscent of Tom Mandrake’s work, but with scratchier shadows and rounder faces. He gives the assemblage of protagonists varied body types, describing each visually to make Remalante’s work easy. The colorist depicts shape and contours through shade and gradient. At times those highlights and shadows could use a little more feathering and blending, while other times the color choices make fine substitutions for the more traditional heavy black shadows. McDaid’s figures get a little sketchy towards the end of the issue, with irises bouncing unevenly, but his storytelling is strong throughout.

Kings Quest does a nice job of setting up the story and identifying the characters, even if none of them are overly developed. Acker and Corson provide the characters with sparks of personality through the action in the story, which establishes a clear-cut threat for the upcoming issues of Kings Quest. Clocking in at twenty pages, Kings Quest #1 seems to just be hitting its stride when the cliffhanger is dropped on the readers, who most likely are sharing the same expressions as Jen Harris and Flash Gordon. As someone who has enjoyed most of the King Features series from Dynamite, I’m definitely looking forward to what happens next to this crew and where this creative team takes readers, as the threat to the universe stands fully revealed.